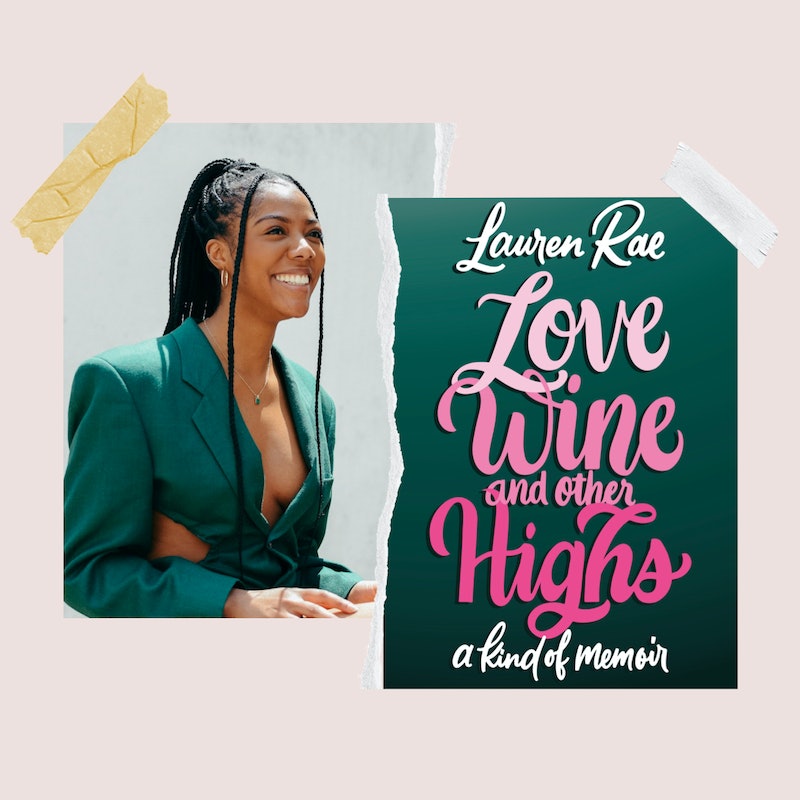 If there was ever a memoir that perfectly embodied what being in your ‘20s was like, then Lauren Rae’s Love, Wine, And Other Highs is most definitely it. In her honest and raw words, Rae talks us through what growing up as Black woman in the early noughties was like and how it didn’t quite live up to the dream Rae had envisioned for herself. Navigating disappointing dates, bad friendships, work setbacks, and mental health struggles, Rae is still determined to find happiness however she can. Think Sex And The City but cooler and a lot messier, and with a heavy dose of nostalgia.

Rae’s originally self-published memoir – I’m Not A Writer – sold out in just a few weeks, and the demand for a re-print was so high that she created a newsletter titled “lol so i wrote a newsletter” to continue writing about her daily life, with an abundance of nostalgic references, of course.

In this section excerpted from Rae’s second memoir, Love, Wine, And Other Highs, she takes us through her move to Germany, what it’s like dating abroad, and whether a “datecation” is ever a good idea.

'Love, Wine, And Other Highs: A Kind Of Memoir' by Lauren Rae
Bookshop.org

Excerpt from Love, Wine And Other Highs by Lauren Rae

Dating as a foreigner working abroad is not unlike a sordid holiday romance – and, much like the participants on Love Island, we “couple up” with anyone we feel an instant connection with because of its scarcity. I learned this lesson quite quickly when I up and moved to Munich, Germany.

Awkward dates aside, there is always a one in 1,000 chance of experiencing a good first, second or third date. Partially due to the fact that I frequently date via the friends-turned-lovers method, and feel uncomfortable in default love settings without the assistance of a glass of red.

With a number of experiences under my belt now, I can express that dating abroad has a certain allure and fun to it that dating at a local restaurant does not have. This includes brief holiday romances, datecations – and yes, even the less commonly known baecation. Exploring fresh terrain with someone you’re kind of into is nothing short of exciting, and their generosity, seen in new countries, is something that gets the metaphorical motor running. In these circumstances, we’re able to experience one another at full capacity, either resulting in the ick or full-blown obsession.

However, my brief Munich encounters were anything but a fairy tale, unless of course it was a fairy tale filled with f*ckboys, mansplainers and the sci-fi trope where there’s a big red button you’re told not to press – in this case the block button. While I’m definitely grateful for these experiences, they were just that for me: experiences.

Before moving, I was privy to a datecation that saw me taken to Nice, France. My first dating experience abroad was another of those situations where I did not realise it was doused with the gasoline of romance. Once again unable to see someone’s interest in me, despite the trip being all-expenses-paid, I went in with an open mind in terms of growing the friendship, though this already strong friendship soon blossomed into the “other” category. Flirting with the “it’s complicated” option seen only on Facebook, this introduction to dating abroad was exciting, fresh and new. Could real first dates abroad be the secret to successful new relationships? Introducing myself to the concept of saying ‘yes’ now and thinking it through later, this new-age dating was exciting to me.

Then there are those dating experiences abroad that offer you the ick earlier than you expected. Getting to grips with someone’s behaviour in general is an experience, but doing it in a situation where you’re stuck together for an extended period of time is quite another. From passing comments to bathroom habits, you’re subjected to each of the red flags you’d usually only be privy to at the very last hurdle before making it to an official relationship – which I guess is a blessing in disguise?

No, I didn’t block you, but here’s why I should have . . . As with many things that happen in my life, dating in Germany started off as a joke while blindly drunk from Prosecco. Beginning innocently enough, a friend and I downloaded both Bumble and Tinder and swiped right on a plethora of okay-looking guys. Was I finally ready to allow a man I didn’t understand to make me laugh? Perhaps. Immediately, there were three men that caught my attention when I glanced at my glaringly bright iPhone screen. The morning after the night before felt like a hangover in more ways than one, as I began to feel anxious about the probability of people I knew IRL seeing my profile on one of the two apps.

Much like Shrek’s poignant scene with Lord Farquaad’s potential marriage conquests, I began my dating diary with three eligible bachelors. Though, instead of a talking mirror, I selected my potential dates by way of dating apps on my smartphone. Bachelor No. 1 was cute and didn’t live in Munich, but was a frequent visitor from Hamburg. Bachelor No. 2 smoked weed, was tall and had an adorable dog. Bachelor No. 3 was just plain hot. Matching with these men in this exact order, the thrill of ‘You’ve got a new match!’ messages was short-lived and I do wish I’d cottoned on to the fact that sometimes bad things happen in threes.

My first attempt at dating in Germany was a complete and utter bust. Bachelor No.1 attempted to squeeze our debut date in with his fifty-five other plans, which meant his earlier dinner with friends ran long – two hours long, to be exact. Glammed up and nervous about my first encounter with a man in well over nine months, my Fenty Beauty Gloss Bomb began to lose its sheen and my under-eye concealer started to dry. I was well past the sell-by date of make-up magic – that two-hour window where my make-up still looked flawless from all angles.

Via WhatsApp, my prospective date sent multiple messages about being another twenty minutes behind, but by that point I was completely over it. I untied my braids from the tension hairstyle I’d put them up in, and washed my face. Finally done with his dinner at 10.30 p.m., Bachelor No.1 texted that he was ready to meet and I should send him a location, a suggestion I politely declined. His outrage and my reluctance to leave my flat two hours after the proposed date saw some 20+ messages detailing why I was a bitch for standing him up and that my looks would only get me so far in life. Our flailing encounter ended there, and I put the experience down to just not being ready for such a stark transition from no dates to utterly deranged men who could actually kill me given the chance. It was time to try again... right?

Love, Wine and Other Highs by Lauren Rae is published by Little a on July 1, 2022.