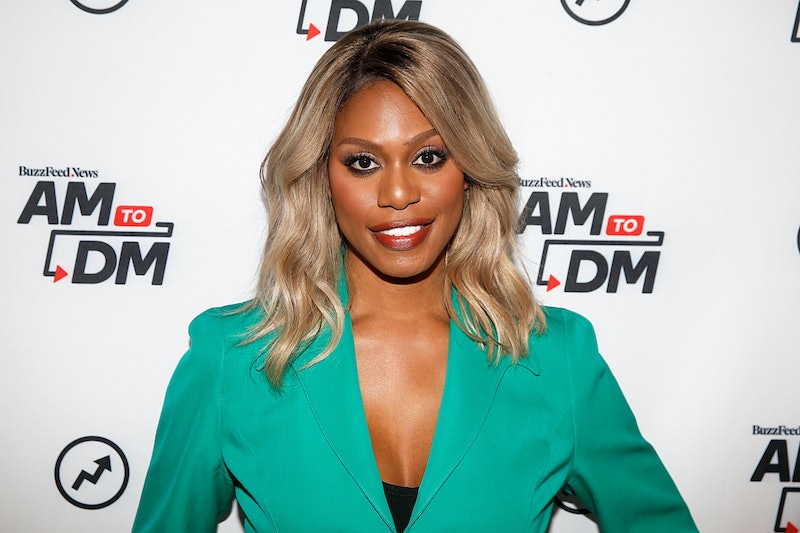 Transgender people face danger every day, even if they're famous. And this past weekend, Laverne Cox was the victim of a transphobic attack in Los Angeles. The Orange Is the New Black star opened up about the incident in a Nov. 28 Instagram video, telling fans that she is fine but still "in shock" and "super triggered" from the attack that happened the day before.

According to Cox, as she and a friend were walking through Griffith Park in Los Angeles, a man approached them to ask what time it was. "The friend who I'm with looks at his watch and tells him the time," Cox recalled, "and then the guy who asked for the time says to my friend, 'Guy or girl?'"

The actor said she kept walking as this happened behind her, but in a split second, the man was attacking her friend. "I look back and I'm like, 'What is happening?'" she continued. "The guy is hitting my friend and then my friend is going towards him." When she pulled out her phone to call the police, Cox said she looked back and the man was already gone.

After processing the attack, Cox said she and her friend agreed that he was being aggressive and was trying to figure out whether or not Cox was transgender. "I don't know why it matters," she said. "At the end of the day, it's like, who cares? I'm in a hoodie and yoga pants, I'm completely covered up, I've got my mask on — who cares if I'm trans? How does this affect your life?"

This was not the first time Cox has experienced this sort of hatred. Over the years, the actor has been vocal about how she's been subject to bullying and transphobia-fueled attacks, especially while she was in school. During a 2014 ABC special, she revealed that she was treated so poorly that she attempted suicide due to shame about her identity. "The suicide attempt happened when I was in sixth grade and I was having all these feelings about other boys," she said. "And I didn't want to live."

According to the National Center of Transgender Equality, at least 28 transgender and non-binary people were murdered, or were suspected to have been murdered, in just the first seven months of 2020 alone, a number that already surpasses the total for all of 2019 and shows how much danger trans people face daily. In her video, Cox said that she was still stunned by the incident, but emphasized that this type of harassment is not the fault of trans people. "It doesn't matter who you are — if you're trans, you're going to experience stuff like this," she said. "It's not your fault that people are not cool with you existing in the world. We have a right to walk in the park."

More like this
Pro Footballer Zander Murray Is "Blown Away" By Support After Coming Out
By Sam Ramsden
Bimini, Tia Kofi & More React To Cherry Valentine’s Death
By Catharina Cheung
The Try Guys Clarified Ned's Cheating Scandal Timeline In A New Video
By Grace Wehniainen
Tyra Banks Flubbed The Name Of Charli D’Amelio’s Boyfriend On 'DWTS' Bond Night
By Jake Viswanath
Get Even More From Bustle — Sign Up For The Newsletter