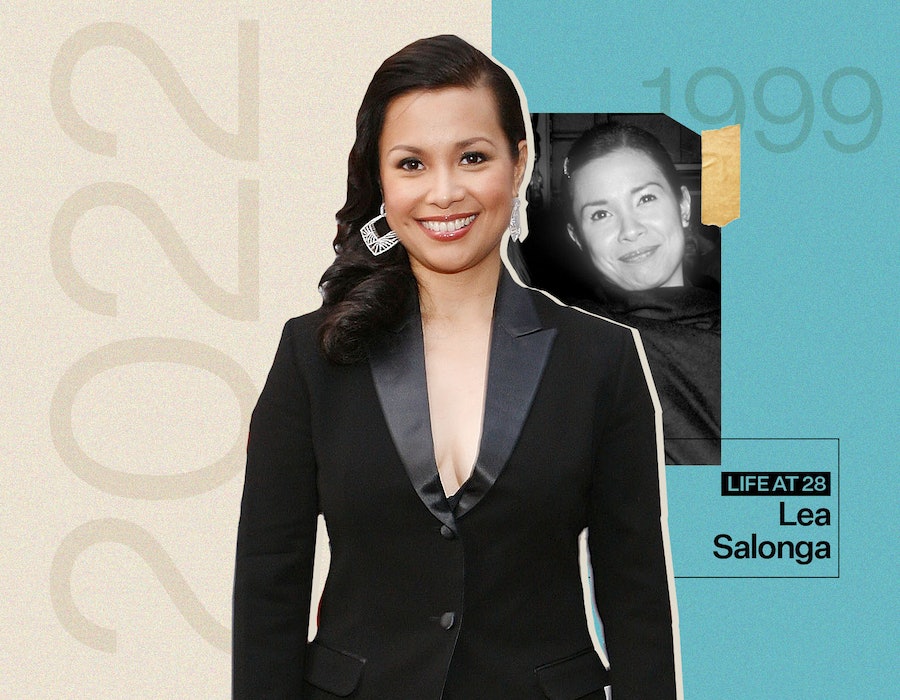 In 1999, Lea Salonga returned to the role that had made her famous: Miss Saigon’s self-sacrificing Vietnamese mother, Kim. She had originated the role 10 years before, at age 18, ultimately winning both Olivier and Tony Awards for her performance. At age 28, she returned to Kim. The part and songs were the same, but Salonga’s life was not.

For one thing, the Filipina actor was now a two-time Disney princess, having sung vocals as both Jasmine in 1992 and Mulan in 1998. (Their speaking voices were performed by Linda Larkin and Ming-Na Wen, respectively.) “To be part of any [Disney] movie like that is like having a bit of immortality,” she tells Bustle. “These are films and pieces of music still being enjoyed by generations of young people. Even when I'm 6 feet under, that music will live on.”

Not unlike the heroines, she was embarking on her own coming-of-age story. At 28, she had recently broken up with her boyfriend and purchased an apartment in Midtown Manhattan, an ocean away from her home in Manila, Philippines. “Up until then, I was always with my mom,” says Salonga, who’s now 51. “[That year] was when I said it's time for me to take this whole, as the kids say, ‘adulting’ thing seriously.”

She learned household chores, tailored family recipes to her liking, and worked to differentiate her identity from that of her close-knit family, specifically her momager and younger brother, whom she put through music school.

In the decades since, Salonga has continued to star on screen and stage, in productions like Flower Drum Song, Allegiance, and Once On This Island. (And remember her guest-starring song in Crazy Ex-Girlfriend?) She also guides emerging artists as a judge on the Filipino offshoot of The Voice and on the Filipino app Kumu.

Up next, she joins HBO Max’s mystery drama Pretty Little Liars: Original Sin, in which she shares scenes with fellow Filipino actors like Malia Pyles (Baskets) and Sharon Leal (Supergirl). “Usually I'm the only person of color in the show, never mind the only Filipino,” she says of the series, which is scheduled to premiere this summer. Salonga plays Elodie, an “out and proud member of the LGBT community, married in a stable relationship with a daughter.” But, she teases, “she has secrets of her own.”

Below, Salonga talks about her late 20s, a TV crush, and the BTS Army.

It was a rude awakening. For anybody who starts living on their own and navigating the world without holding someone's hand, it's intimidating and scary. [But it can be] quite a confidence booster, knowing you can keep your apartment clean, cook for yourself, and basically be responsible for your survival.

When did you miss your family the most?

When I had to get up in the morning and go, “I have to make the bed now” or “I have to do my grocery shopping,” because those were things [my mom] always did. But I would call her and ask, “How do you cook this?” I remember asking about nilaga and afritada. So it [felt] like she was there. There was always a connection to her.

You were straddling multiple entertainment spaces, on Broadway, the West End, and in the Philippines. Were you concerned about building roots?

When I purchased the apartment in New York and the house in Manila, where my mom still is, I felt like I had roots everywhere. The nature of my work has me traveling so much anyway, so I try to make home wherever I happen to be.

Did you feel equally at home in those places?

Whenever I was in the Philippines, because I was outspoken, I [came] across as too Westernized. It has been pointed out to me that I come across as very Western in my ideals, in my manner of speaking, in how I present myself, and how forward I can be, which I think takes people by surprise. I've finally come to the point where I'm able to say, “I can only be who I am.” If I'm not doing anything evil or bad, then this is who I am. Just respect it even if you don't like it.

How were you feeling about your life and career?

Personally, I was quite satisfied because I had an income! I had my independence. I mean, I got to be two Disney princesses! [And that was] despite the lack of Asian representation. Now things are getting better, and I'm seeing more people of color represented in all forms of media. So in that respect, I feel satisfied that I was a part of getting to this point.

You made history in your 20s. How did you feel about being a trailblazer?

The thing about being a trailblazer — and I think others would agree — [is that] it’s not on your mind in that moment. You're thinking about the job. I kept blinders on. I made sure I sang as well as I could every time I was on stage and every time I opened my mouth to sing. That was important to me. I just enjoyed the moment because I didn’t know if I was going to get another one.

If you could capture your mentality at 28 through a Disney song, what would it be?

Maybe a combination of “Reflection,” “Belle,” and Moana's "How Far I'll Go,” [about] being happy in her community, but still feeling a pull toward something bigger.

Disney instills this idea of a fairy-tale romance. At 28, you’d recently broken up with your boyfriend. What was your take on love?

I knew it was something that was instilled in so many women for generations, to find Prince Charming and live happily ever after. But I saw that real life doesn’t always reflect fairy tales — let’s look at Princess Diana, for example — and realized things aren’t always what they’re cracked up to be.

You’ve written about being a BTS fan. Who were you a fan of in the late ’90s?

Fangirling over BTS, I feel like a teenager. I'm more on the tita side, where they feel like my sons or nephews. They're wonderful and so fantastic. V seems to be the one whose genre preferences mirror mine, so [I want to collaborate] with him. But at 28, I was fangirling over Friends. That was my devotional, my religion. I was faithfully watching the series. It was like, “What is Phoebe wearing?” or “What is Monica wearing?” or “What is Rachel wearing?” And [seeing] if there were pieces of [their] wardrobes that I could emulate.

Did you have a crush on anyone?

My favorite was Matthew Perry as Chandler. Love him. Absolutely.

Don’t take life too seriously, and keep your sense of humor. There will be plenty to laugh about as you go on in life.

More like this
Playing A Scrub Nurse On 'Grey’s Anatomy' Made BokHee An Instagram Royalty
By Brad Witter
At 28, Minnie Driver’s Personal Life Was “Falling Apart”
By Kate Dwyer
Jesse Williams Is “Not Down” Despite Leaked Images Of His Broadway Nude Scene
By Brad Witter
'Derry Girls' Creator Teases Exciting Spin-Off Starring These Three Characters
By Olivia-Anne Cleary
Get Even More From Bustle — Sign Up For The Newsletter