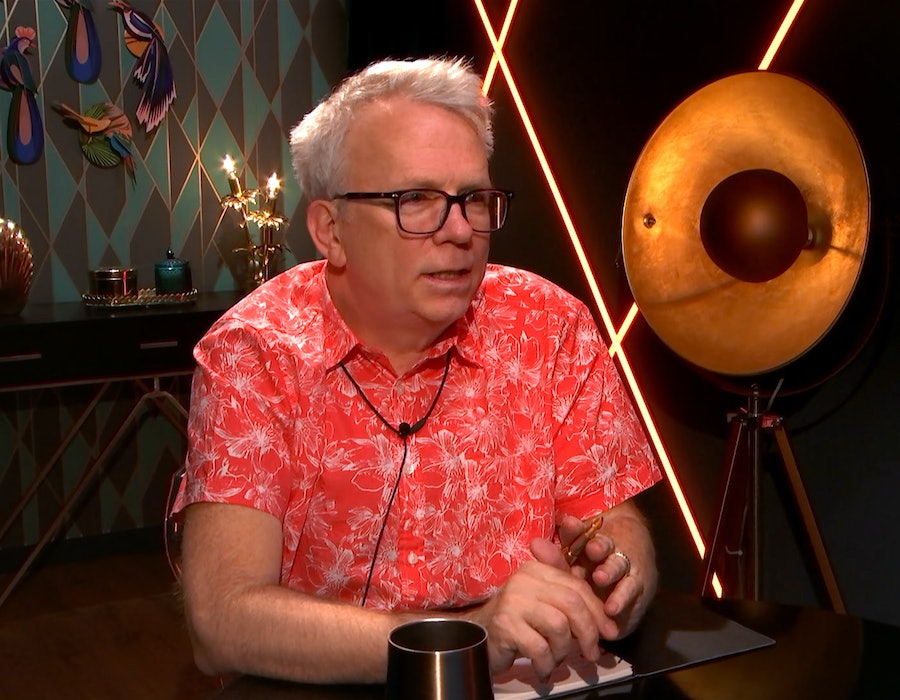 Before we hang up our Zoom call, Lee Swift asks for my Instagram handle.

The 58-year-old Texan, who memorably had his niece give him an internet lingo education before appearing on Season 2 of Netflix’s social media competition The Circle, is embracing life online as a way to connect with his new fans — and the journalists who write about him. Despite the deception at the center of his strategy to catfish his fellow contestants as the 24-year-old free spirit “River,” Lee’s full-hearted earnestness has endeared the author to his fellow contestants and viewers alike.

“We are playing a game, but you’re also connecting with people,” Lee tells Bustle. It explains why, at the moment when River was given the power to block someone from the game, he simply couldn’t take out his biggest competition because it would mean blocking a friend. “I kept telling myself, Think with your head, think with your head, this is a game — and my heart would take over,” he says. An unabashed empath, Lee says going with feelings over strategy was worth it. “I’ve learned a lot about myself, and I got friends forever with my other cast mates,” he says in a River-like display of positivity.

Ahead of the Season 2 finale, Lee chats about life after the show, the real River, and what he was reading in the Circle while doing the hard work of being a catfish.

You mentioned on the show that your nieces and nephews helped you learn internet lingo to prepare to play a 24-year-old. What did that education look like?

It was actually the [niece] who is in college, because I thought that is likely to be the main age [of the cast]. We just virtually went through a whole bunch of things. The thing she made a mistake on is the basic stuff like YOLO — she thought I already knew it, so we didn’t even talk about it. We got deep into the weeds, but I should have got YOLO and FOMO, things that everybody should know that I didn’t!

When did you decide to be a catfish?

Through the casting process, I was kind of torn. But I ended up ultimately thinking hey, [the cast is] gonna be mainly young people, I think I can connect with them, I can create this character, which is kind of built from my own life experiences when I was younger. I got so much out of re-living being 24 that it was worth it to me.

Seeing John — who appeared to be an older gay man — come in and be well received, did you have any second thoughts that you should have just gone in as yourself?

I absolutely did think that. I really thought, why didn’t I come in [as myself], because everybody was gravitating to him. And I think John — you know, Lisa and Jack — had an advantage because we’d gotten rid of some catfish, so nobody was really catfish hunting anymore. I so gravitated to the character they created because it was kind of like me, you know?

I’m curious about the real River. When did you decide you’d be using his photos, and what does he think about it now that the show is out?

We’ve talked. He’s getting so many people following him — he’s loving it, to be honest. He has aspirations; he’s a very talented, wonderful young guy, and I want the best for him. I actually thought about going in as a girl. I had three sets of friends that I had put together [as potential profiles] — and also my niece, so four, I guess. I kind of kept looking at him, and as I was developing the character — his [real] name’s Doak — it was his photos that just spoke to me.

What kinds of reactions have you been getting from your friends and family, and from strangers?

Well, the friends and family, it’s constant mocking [laughs]. It’s all in fun. It’s like, “Do we have to get a limo for you now that you’re a celebrity?” And I go, “No, just a bowl of green M&Ms and a bottle of champagne.” But no, they’ve been so supportive and wonderful.

As far as the public and the fans of the show, I’m just overwhelmed by it. And they’re all over the world. The thing that’s touching me the most is a lot of queer young people that are saying, “Thank you so much, you’re such a good example and you’re giving me hope that you can be happy and have a full life.” That means more than anything to me.

The main thing I’ve seen on Twitter so far is people thinking your crying on the show is endearing.

[Laughs] My god. My husband, because he knows me, was like, “Whatever you do, don’t cry.” What do I do? I cry on Episode 1. I’ve had some people be like, “How could you cry that fast?” Bryant and Savannah, I didn't know well. I did get a connection with Bryant right away; Savannah, we’ve made the connection after the show, to be honest. But I knew how bad I wanted to be in there, and I knew how bad they must be hurting [when they were blocked]. I’m an empathetic kind of person and it just came out. And I just don’t hold it in, and I’m not ashamed of that.

Now that the show is out, have you asked Lisa to get that intro to Lance Bass?

Have you spoken to him?

She said we’re gonna work it out. [Lisa’s] a doll. I can’t wait to meet him. My husband and I are both fans.

Was there anything that surprised you, watching the episodes back?

Is there a specific moment that you’re referring to?

Probably the most revealing to me was how intense Savannah and Terilisha were in their first influencer chat. Both of them to me were much better players than I was. I think as far as strategy, what happened was they were so powerful everybody [thought], These are the two that we gotta get rid of, because they’re gonna win.

As a writer and book lover, were you allowed to read once in the Circle? Did you bring books?

We were allowed to bring in some books, and I did read some, but it’s so funny: People think there’s so much downtime. I don’t know if it was just me, but there was not a lot of downtime, we were busy chatting or doing games. You’re eating, or you’re getting ready for something. I read some, but not a lot, to be honest. I had Ricky Martin’s autobiography that I was reading.

I’m a big fan of his, I think he’s incredible.

Has your perception of social media changed since you’ve been on the show?

I think when I was a 13-year-old gay kid in West Texas and feeling so alone, so hopeless, how great it would have been to have Instagram, and Twitter, and TikTok, and be able to see, “Oh my gosh, I’m not by myself. There's other hearts like me.” I love it. Yes, are there things we need to make it better, for sure. But I think we can spread a lot of love through social media.

Now that you’ve learned what FOMO means, what’s next for you?

I have a book that just came out called Gabe’s Story. I’m kind of seeing where this goes. I feel myself still keeping my books going, but I kind of want to go back to screenplays and writing for television. I’ve been optioned, but I’ve never had anything made, so maybe this time something could get made!

Would you ever go on another reality show?

….yes. [Laughs] None of the dating shows! I am a fan of reality shows. I just eat it up. I like Big Brother, I like Survivor, I like Too Hot To Handle, I liked Love Is Blind, oh my gosh… I love reality TV, I would definitely do it again. You wanna know my dream thing? It’s for The Circle to ask me back.

More like this
'Love Is Blind: After The Altar' Season 3 Has A Release Date & It's Very Soon
By Grace Wehniainen
Love Is Blind’s Natalie Claims Shayne Signed Up For 'Perfect Match' While They Were “Still Together”
By Brad Witter
The 'Freeridge' Cast Shared Their Hopes For A Potential Season 2
By Grace Wehniainen
Netflix Shut Down 'Bridgerton' S3 Rumours About A “Very Dark” Storyline
By Bustle
Get Even More From Bustle — Sign Up For The Newsletter
From hair trends to relationship advice, our daily newsletter has everything you need to sound like a person who’s on TikTok, even if you aren’t.