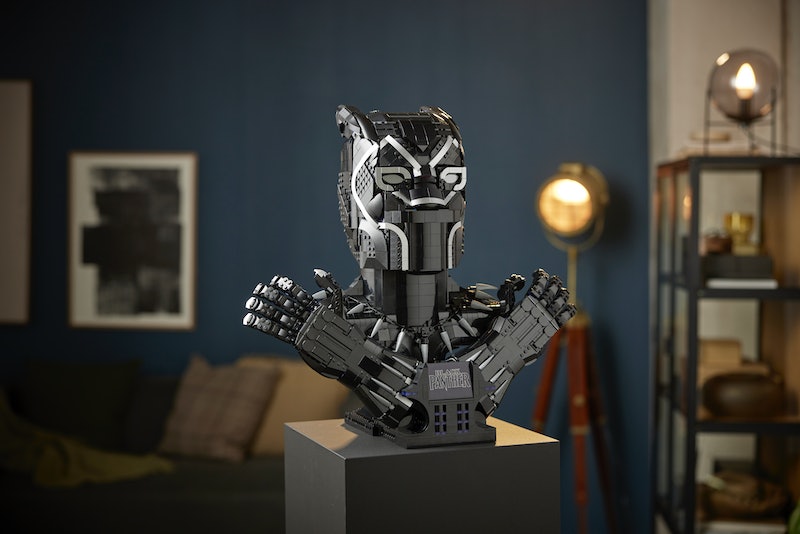 Lego is no stranger to creating iconic TV and movie-inspired sets with Harry Potter and Friends inspired sets, and the toy production company announced earlier this year that we can also expect a The Office Lego set soon. But there’s more. Now, Marvel fans can celebrate all things Black Panther with a brand new Lego set. This new set is set to be released a month before the sequel to Marvel’s Black Panther, Black Panther: Wakanda Forever, is scheduled to hit cinemas on Nov. 11. Hoping to get your hands on this Lego collectible item? Here’s how you can buy the Black Panther-inspired Lego set in the UK.

The Oscar award-winning film and toy giant have collaborated on a buildable bust of King T'Challa — played by the late Chadwick Boseman — in the Wakandan superhero's signature pose, crossing his arms in a fist and X shape across his chest. The official release date for the collection is set for October 1, so mark your diary now.

Priced at £299.99, the Black Panther bust presents an authentic challenge to adult collectors with its 2,961 pieces and figures that can be posed in whatever way you choose. To give you more of a visual idea of what the collectible is like, when built, the figure stands at 46 cm high and 39 cm wide.

A recent teaser trailer for the upcoming sequel created quite the buzz and the release of Lego’s latest collection will no doubt get fans even more hyped up for Black Panther: Wakanda Forever. Four years after the release of the first film, Wakanda Forever is expected to explore the future and legacy of Wakanda following the passing of King T’Challa.

More like this
You Definitely Know The Voice Of Shuri's AI In 'Black Panther: Wakanda Forever'
By Brad Witter
The 'Love Actually' Reunion Is Missing A Major Player
By Bustle UK
'The Holiday' Director Just Addressed *Those* Sequel Rumours
By Sam Ramsden
Robert Downey Jr.’s New Film Is A Tender Story of Fatherhood & Forgiveness
By El Hunt
Get The Very Best Of Bustle/UK