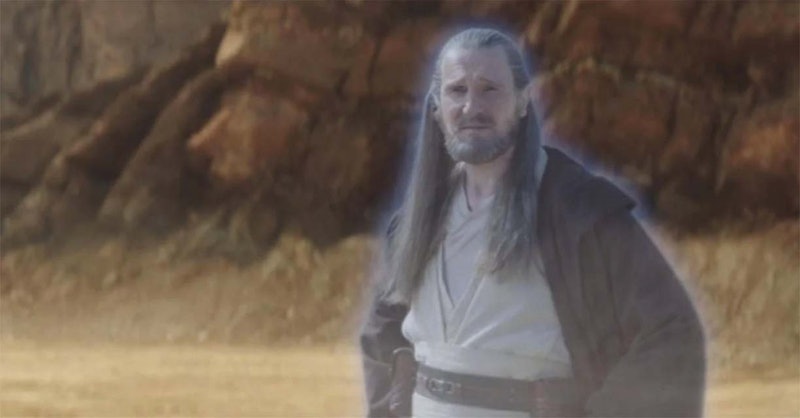 Spoilers ahead for Obi-Wan Kenobi Episode 6. Disney+’s long-awaited Star Wars series, Obi-Wan Kenobi, reached its end, completing a new and enlightening chapter for the iconic title character played by Ewan McGregor. Picking up 10 years after the cataclysmic events of Star Wars: Revenge of the Sith, the series follows Obi-Wan Kenobi after losing his apprentice, Anakin Skywalker (Hayden Christensen), to the Dark Side. Famously, Anakin goes on to become one of film’s greatest villains, Darth Vader, while Obi-Wan flees to the desert planet of Tatooine to go into hiding. The show does its best to fill in the gaps of what unfolded in the time between Revenge of the Sith and Star Wars: A New Hope. Meanwhile, it also delivers on some fan service by bringing back familiar faces — including Qui-Gon Jinn.

At the end of the Season 1 finale, Obi-Wan is trekking through the desert on the back of a trusty steed. He has already defeated Darth Vader (for now), saved Princess Leia, and officially met a young Luke Skywalker before coming across a translucent blue figure. The robed person turns and reveals himself as Qui-Gon Jinn (Liam Neeson) in the form of a Force ghost.

If you’re wondering why Liam Neeson randomly pops up in the finale, it’s because he’s been part of Star Wars from the beginning. Well, not from the very beginning — it can get a bit confusing. Neeson first played Qui-Gon Jinn in 1999’s Star Wars: The Phantom Menace, where he served as Kenobi’s Jedi Master. Story-wise, Phantom Menace is the first Star Wars installment, but if we’re talking release dates, A New Hope was the first movie of the franchise to hit theaters in 1977.

As Star Wars fans know, Phantom Menace is the only Star Wars movie in which Neeson appears, mainly because he gets murdered by a horned Sith Lord during the climax. You’ll likely remember Qui-Gon as the grizzled yet sage Jedi Master with the green lightsaber. He’s a master of languages and the Force. He also discovers Anakin Skywalker as a child and believes that the boy is destined to bring balance to the Force and the galaxy.

Before the Disney+ series, Phantom Menace served as Qui-Gon’s only visual appearance, but he gets mentioned in Revenge Of The Sith, the third movie of the prequel trilogy. If you’re not paying attention, you might miss it, but during Revenge of the Sith’s epilogue, Yoda informs Obi-Wan that there’s still training he must complete while in hiding. Yoda explains that an old Jedi has figured out immortality and how to return from the netherworld of the Force — that Jedi is none other than Qui-Gon Jinn.

Yoda then promises to teach Obi-Wan how to commune with his old master. It’s important to note that Qui-Gon is only referenced in name, and we never actually see him after Phantom Menace until now. Nearly seventeen years later, Qui-Gon is back.

In Obi-Wan Kenobi’s final scene, Qui-Gon tells Obi-Wan that it took the Jedi Knight long enough to see him. “I was beginning to think you’d never come,” Qui-Gon says. Obi-Wan retorts, only for Qui-Gon to say, “I was always here, Obi-Wan; you just were not ready to see.” The Jedi ghost adds, “Come on, you’ve got a ways to go.”

With this line, the show ends, but it also leaves room for a continuation if Lucasfilm and Disney+ choose to renew Obi-Wan Kenobi for another season. While Obi-Wan had a complete emotional journey in this first season, there is more room for him to grow as a person and Jedi to become the character Star Wars fans initially became enamored with in 1977’s A New Hope. Disney+ could create another season that explores more of Obi-Wan’s connection to the Force and his various adventures.

The future of Obi-Wan Kenobi and details surrounding Liam Neeson’s appearance remain unclear. The series director Deborah Chow dodged questions about Neeson’s inclusion in the show ahead of the premiere when speaking with Total Film, per Games Radar. When asked if Qui-Gon could return, Chow mentioned fans would be in for more than a few surprises without elaborating on specifics. “Obi-Wan’s going on a journey,” she said. “There’s going to be different people that come into his life. One of the things I was trying to do with this series was to have the legacy, and who is important in Obi-Wan’s life, and to also have some new characters. So it’s going to be a mixture of the two. But I do think there are some surprises to come. I hope.”

Neeson’s cameo as Qui-Gon is undoubtedly one of those surprises, and whether we see more of him and McGregor in future Star Wars projects is a mystery. But if the Obi-Wan Kenobi finale tells fans anything, it’s that the franchise has “got a ways to go.”

More like this
Everything To Know About Obi-Wan Kenobi Season 2
By Kadin Burnett
Here's Why You'll See Less Of Olivia Rodrigo In 'HSMTMTS' Season 3
By Bustle Editors
All The Marvel Easter Eggs You May Have Missed In ‘Ms. Marvel’ So Far
By Kadin Burnett
Where Is Oscar Torres In 'Only Murders In The Building' Season 2?
By El Hunt
Get Even More From Bustle — Sign Up For The Newsletter