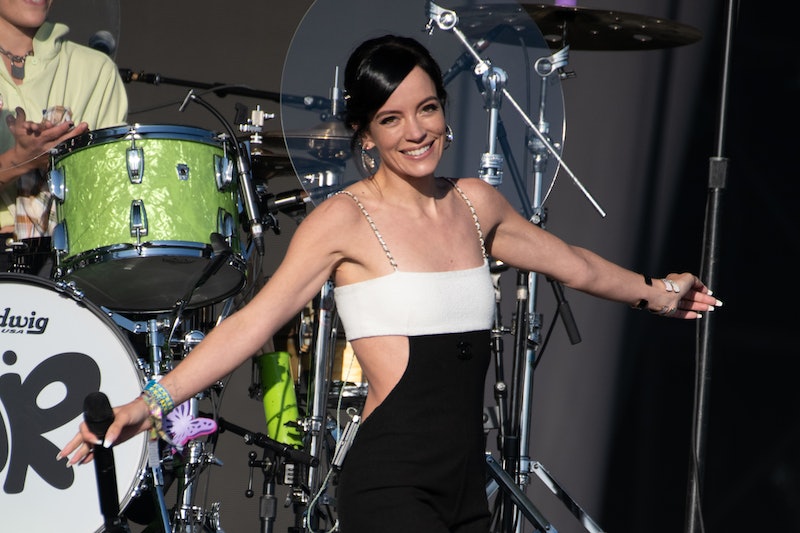 Never one to miss out on a chance to perform with her idols, Olivia Rodrigo brought out the perfect guest at England’s Glastonbury Festival on June 25: Lily Allen, whom she introduced as “the most incredible songwriter, the most incredible artist, the most incredible person.” For Allen, the experience was just as exciting. She was “quite emosh” afterward, as she explained on Instagram, in large part because she wasn’t sure how performing again sober would go.

“I didn’t know whether i’d be able to get up on a stage like that sober again if i’m honest, a part of me thought it was all in the past,” Allen wrote, in part. “I had the most amazing day. Thanks @oliviarodrigo for having us. You smashed your first Glastonbury. Who knows, maybe i won’t hang up my [microphone] just yet.”

Allen’s two daughters with ex-husband Simon Cooper, who are 10 and 9, were another reason her Glastonbury performance was so meaningful to her. Not only did she and Rodrigo call out the Supreme Court justices who recently overturned the landmark reproductive rights case Roe v. Wade, she got to have her “babies” in the audience. “Things are truly messed up, but at least my babies got to see their mamma play and slay Glastonbury with their favourite pop star,” she also wrote on Instagram. “They were very proud and so was I.”

Allen, who is just weeks shy of three years sober, has been candid about how substance use wreaked havoc on her life and her family. “I felt so guilty about neglecting my kids in those early years of their life and having to go off on tour and misbehave in the way that I was,” she said in a January 2021 interview on The Recovery podcast, per People. “I really have a great relationship with my kids now.” She later called getting clean “the BEST thing” she ever did, in an Instagram post marking two years of sobriety.

The singer made it clear that her return to the stage at Glastonbury was up there among her proudest accomplishments, too. In her Instagram stories, she shared clips of her surprise appearance and wrote in one, “so overwhelmed watching this stuff back in the car home. so many emotions. … and with nearly 3 yrs sobriety under my belt. so happy.” As for Rodrigo, she seemed just as emotional, announcing onstage after she and Allen performed 2009’s “F*ck You” that she was “going to cry” and would “remember this moment for the rest of [her] life.”

Adorably, Rodrigo had written Allen a thank-you note ahead of the performance, and the “Smile” singer included in her post-show Instagram carousel. In it, the young star let Allen know that sharing the stage with her is “truly the biggest honor” and she’s been “so inspired” by her for years. “Thank you for making this a day I’ll never forget,” she added.

More like this
60 Empowering 'Renaissance' Lyrics That Make Perfect Instagram Captions
By Catharina Cheung
Harper Teasing David Beckham’s Dad Dancing Is Beyond Adorable
By Frances Stewart
Demi Lovato Explains Why She's Now Using She/Her Pronouns Again
By Alice Broster and Radhika Menon
The Controversy Around Beyoncé's “ENERGY”, Explained
By Frances Stewart
Get Even More From Bustle — Sign Up For The Newsletter