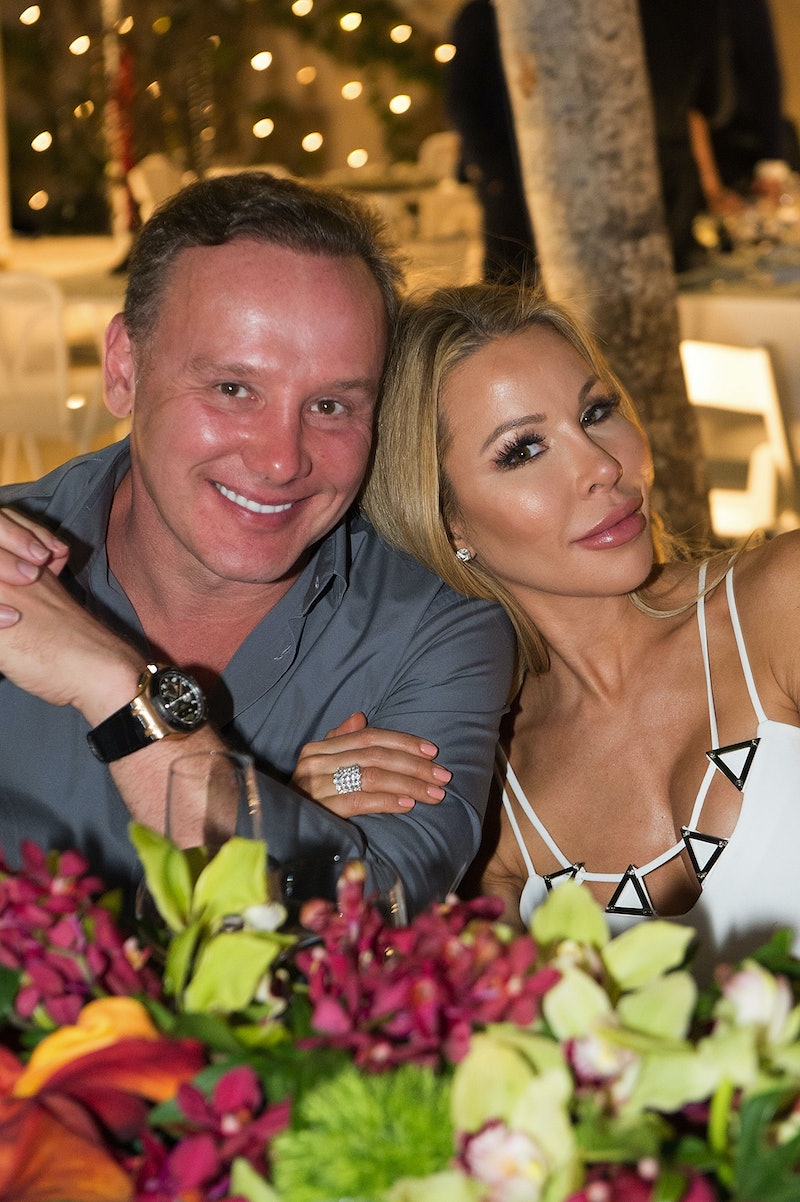 The Real Housewives of Miami star Lisa Hochstein is sending a message to her estranged husband in her Season 5 tagline: “You can try to take my castle, but you will never steal my crown.” In the new season of Peacock’s RHOM reboot, the 40-year-old Housewife is splitting from her 50-year-old husband Lenny Hochstein, who filed for divorce in May 2022 after 12 years of marriage and weeks of speculation.

“Lisa and I are getting divorced,” he told Page Six. “A few weeks ago, I denied this because because I am trying my best to protect my family during this process. This is a very difficult time, and I would ask for some privacy so that we can best take care of our children who mean the world to us.” The two share 7-year-old son Logan and 3-year-old daughter Elle.

Since the announcement, things have only gotten more chaotic between Lisa and Lenny, breaking out in public spats over their children, their extravagant $52 million Miami home, and Lenny’s new girlfriend. Unfortunately for Lenny, but luckily for viewers, it was all captured by Peacock cameras, meaning the new season of RHOM will document the demise of their marriage from both of their perspectives. Below, here’s everything you need to know about the Hochsteins’ messy divorce.

Why Did Lenny File For Divorce From Lisa?

When he confirmed the divorce to Page Six, Lenny claimed that the couple “contemplated divorce for the last several years” before he filed. “I tried my best to avoid it for the sake of our children, who we love deeply,” he continued. “We have been living separate lives for months and made the decision to divorce last month.” The surgeon also confirmed rumors that he started dating model Katharina Mazepa, but only after they separated. “It was after the decision was made that I started seeing Katharina,” he clarified. “This is something that Lisa was well aware of before it happened.”

However, Lisa says otherwise. A friend of hers told Page Six that she wasn’t “aware” of any divorce. In her own statement, Lisa expressed how shocked she was by Lenny’s change in behavior. “With two young children involved, as a mom I’m going to focus all of my energy and time on them,” she said. “I’m blindsided by his behavior and reckless handling of the situation.”

In the RHOM Season 5 trailer, Lisa was caught off-guard by what had transpired — and unsure that Lenny’s new romance only started after the divorce process began. She cries to Marysol Patton that she’s “losing my husband, my best friend, to another woman” and alleges that her personal trainer dropped her because Lenny hired him to train “the mistress.” The trailer ends with Lisa on a heated phone call, presumably with Lenny, warning that if he brings “that girl” near their kids, “there’s going to be a problem.”

Lisa and Lenny previously featured their marriage and fertility struggles in earlier seasons of RHOM. When RHOM returned for Season 4 after an eight-year hiatus, Lisa revealed that Lenny had an “emotional affair” in the interim, causing them to briefly split before reconciling and welcoming their two kids. “Because we weren't succeeding at having a family, yeah, we almost got a divorce, and it was devastating,” she said. “But Lenny does not give up easily at all. So when he saw that I was serious, and I was done, he came groveling back... and it was the best decision of his life.”

Is Lenny On RHOM Season 5?

Most Househusbands opt to stay off-camera if they’re divorcing from their Real Housewife spouse, but not Lenny. The plastic surgeon is front-and-center in RHOM Season 5 from the first episode, where he appears to be disinterested in having any conversation with his wife. By the end of the fourth episode, Lenny is heard in a jaw-dropping hot mic moment where he subtly announces his intentions to break up with his wife during a pool party thrown by him and Lisa. “In a couple months, I might be single too,” he whispers to a friend, who quickly says he doesn’t want to see that happen. “I do,” Lenny affirms.

Is Lisa Still Living In Their Former Home?

The Hochsteins’ mansion, located in the exclusive neighborhood of Star Island, has been a huge point of contention in their divorce. At the end of the RHOM Season 5 premiere, there’s a flash-forward scene that teases a heated conversation between Lisa and Lenny over who can live in the home. “I just don’t understand why you’re trying to get me out of this house. I’m still the mother of your children,” she says to him. He responded, “I know you’re never gonna leave voluntarily. I know that you’re gonna have to be told by the court. Do you get that? I asked you a simple question. Do you understand that?”

As of June 2022, Lisa is not living in their home, as seen in court documents obtained by The Sun where Lisa claimed she had to “flee” the mansion after Lenny allegedly “threatened and berated” her in front of the kids. However, she did request exclusive use and possession of the property. Lenny, though, claimed that he actually moved out after Lisa “stalked him in the house.” Regardless, Lenny had held steadfast that the property belongs to him and claims their prenuptial agreement states that Lisa must move out of the house within 30 days of filing. Lisa is attempting to invalidate the prenup.

Lisa and Lenny have a long way to go before their divorce is finalized, as they’re still embroiled in a heated public battle over finances and property. In August, Lisa stated in court documents that she was being “financially strangled” by Lenny, alleging that he “retaliates by restricting access to funds” whenever she does not follow his demands in the divorce proceedings. More recently, Lisa claimed that her credit card was “denied” when trying to buy diapers and food for her kids. “[Lenny] has the ability to throw lavish parties, but doesn’t have the ability or desire to provide support to [Lisa] and the parties’ two young children?” the documents ask.

In previous hearings, Lenny stated that Lisa makes $30,000 per episode from RHOM but did not respond directly to his wife’s documented claims. She requested that the court orders Lenny to maintain “reasonable financial status quo” for their family in addition to paying spousal and child support and attorneys’ fees.

More like this
'RHOSLC' Star Jen Shah Refuses To Do A Post-Sentencing Interview With Andy Cohen
By Brad Witter and Jake Viswanath
Lenny Hochstein's “Boob God” Reputation Bolsters His Multimillion-Dollar Net Worth
By Brad Witter
Everything To Know About 'RHONJ' Season 13
By Brad Witter and Jake Viswanath
Hannah Ann Got Engaged 3 Years After 'The Bachelor' & The Proposal Was Dreamy
By Grace Wehniainen
Get Even More From Bustle — Sign Up For The Newsletter
From hair trends to relationship advice, our daily newsletter has everything you need to sound like a person who’s on TikTok, even if you aren’t.