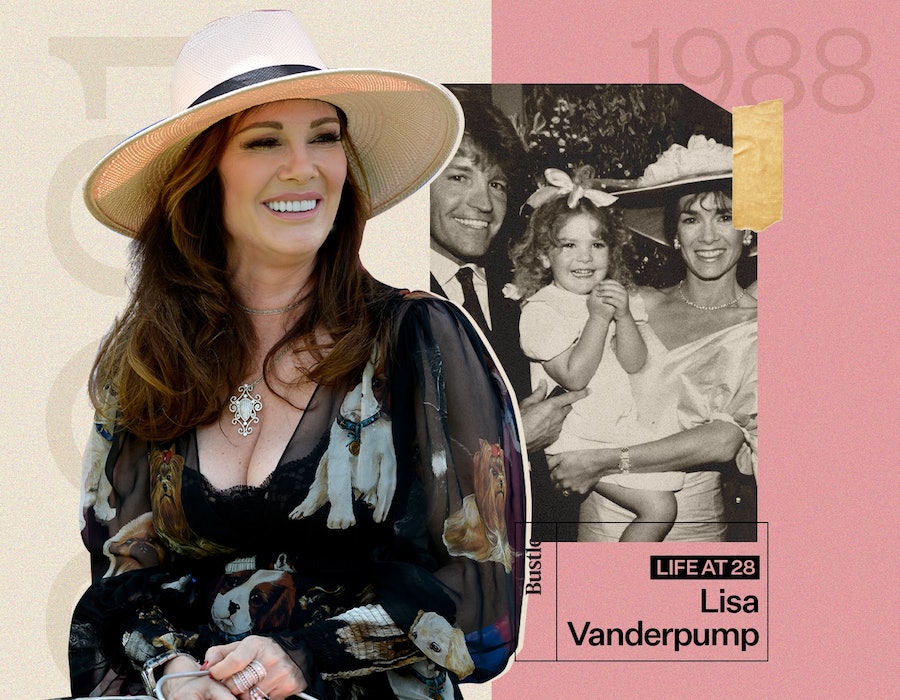 In Bustle’s Q&A series 28, successful women describe exactly what their lives looked like when they were 28 — what they wore, where they worked, what stressed them out most, and what, if anything, they would do differently. Here, former Real Housewife of Beverly Hills Lisa Vanderpump talks marriage, motherhood, and her changing relationship to failure.

Lisa Vanderpump’s life at 60 is the picture of extravagance. She appears in our Zoom call in full glam from the upstairs office of her famed Villa Rosa mansion, where she’s perched on a tall Victorian chair that fittingly resembles a throne. Behind her is a bay window with a resplendent view of her Beverly Hills estate, a jewel-encrusted chandelier, and a luxe, beige chaise that looks so pristine it’s hard to believe it’s ever been sat upon. “I’m very blessed, I’ll admit that,” she says, surveying her kingdom. The woman is nothing if not on-brand.

Since introducing herself to the world in 2010 on The Real Housewives of Beverly Hills as a British expat who loves diamonds, rosé, and perpetually glossed lips, Vanderpump has become reality TV royalty. She has an adoring public, a moat full of swans, and an empire that includes four restaurants, three reality shows, a collection of wines, and a non-profit dog rescue organization, among other ventures. But while being on the Housewives — which she left in 2019 — certainly boosted Vanderpump’s profile, she’d been in and around the realm of celebrity for decades before joining the franchise.

Vanderpump began acting as a child while growing up in South London, appearing in films like A Touch of Class (1973) and Killer’s Moon (1978) as well as the BBC comedy series Kelly Monteith. In the early ‘80s, she became a muse for the English pop band ABC, starring in their long-form music video Mantrap as a sultry temptress named Samantha. By her mid-20s, she’d married Ken Todd, become a stepmom, and had her first child, Pandora, pausing from acting because she didn’t want to travel and she and Ken were “so in love and having fun.” Having a family didn’t slow the couple down. “Even though we had a young baby, we were always out and about,” Vanderpump says. “Pandora went everywhere with us except the nightclub.”

Below, the host of E!’s Overserved with Lisa Vanderpump reflects on her wild 20s, taming Ken, and learning to take herself less seriously.

Take me back to 1988, when you were 28. How were you feeling about your life and career?

Well, I kind of started my life pretty early. I'd had a job since I was 13. I bought my own apartment when I was 19. I got married at 21. And when I was 25, I had Pandora. So I had a two-and-a-half-year-old at 28, which when I look back on it now [is unfathomable]. If my daughter had said she wanted to get married at 21, I would have said, “No, no, no. What are you thinking?” Especially because I'd only known Ken for three months [before we got married]. But we both always flew by the seat of our pants.

Do you have any standout memories from that year?

Ken and I were living in England and we had about four restaurants at the time, but we were also in the property business. We’d just sold our house to [the Dire Straits frontman] Mark Knopfler, and we decided to use the money to buy these tickets on British Airways that gave you a round trip across the world. Roger Taylor of Queen was a very good friend of ours, so he lent us his house in Los Angeles for six weeks. We stopped at a few places on the way [to California] and we went to Hawaii and we ran into Johnny Depp, who we didn’t know at the time because we didn’t have 21 Jump Street in England. But him and [his then-fiancée] Jennifer Grey became our first friends in LA. [Original Rolling Stones bassist] Bill Wyman was also one of our best friends; Ken was the best man in his wedding. So we went on the Steel Wheels tour in ‘89. We had a lot of friends from London who were in the music business. It was just a wild and crazy life.

How were you feeling about motherhood at the time?

I actually took to motherhood really easily. I remember saying to Ken when I was pregnant, we won’t be able to do this or we won’t be able to do that. And I remember thinking when they first handed Pandora to me, “Well, what am I going to do with this?” But as soon as I cuddled her, I thought, “What would I do without her?” I became one of those obsessive mothers. We always had a nanny because we worked in nightlife, but I didn’t let anybody put her to bed until she was 18 months. I was very hands-on. I was brought up without a tactile relationship and very British, so I wanted the exact opposite [for my kids].

How many dogs did you have?

I only had one — a big, white, fluffy Samoyed named Huckleberry. He’s in all of our wedding pictures. I always wanted a dog because I wasn't allowed to have one when I was growing up. My parents had cats. Looking back, I've always been a little obsessive. I love hard. I feel very possessive about my children, my animals, my husband. If I’m in, I’m in big time.

Speaking of Ken, you’d been married for about seven years at 28. How were you feeling about your relationship?

Ken was a bit of a wild man when I met him. He was used to being single and working in nightclubs. He’d gotten into the restaurant business because he thought it was a good way to meet girls, but I knew him through my brother. To tame him and calm him down was challenging at the beginning, but luckily he wanted to do that.

When we got married, we were always risking things, and we definitely had financial struggles in the beginning. I think I had indigestion for about 15 years. But we were partners and we had a lot of fun working together.

What would your 28-year-old self think of your life now?

It’s interesting because I’m writing my second book, and a lot of it is about things I wish I knew when I was younger. There’s so much self-doubt in women, because you see all of these images of unattainable perfection. I would always say, “Oh, we can’t afford failure.” But failure is inevitable.

If you could give your 28-year-old self any advice, what would it be?

I would say don't put so much pressure on yourself and have more confidence publicly. I used to hate public speaking, but now I can get up and speak in front of thousands of people. I don’t know what I was so scared of. Making a fool of myself? That’s fine. Learn from it. Laugh at yourself. Don’t take things so seriously. At 28, you shouldn't know it all. You shouldn't have it all. You should be at the prime of your life where it's OK to make mistakes.