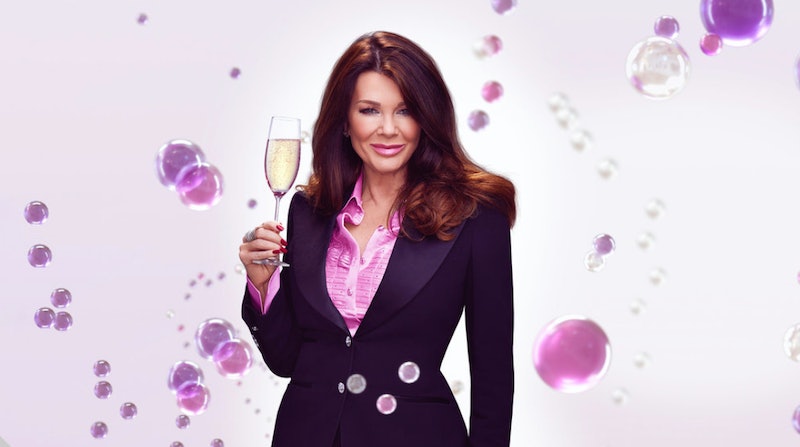 COVID-19 may have forced Lisa Vanderpump to shutter her Los Angeles restaurants, but it can’t stop the reality TV star from entertaining. She’s back with Overserved With Lisa Vanderpump, a new E! series that premiered March 18. In her latest television endeavor, the British restauranteur throws open the gates to her spectacular Beverly Hills home, Villa Rosa, and hosts dinner for a raft of medium-famous celebrity guests.

“I have launched restaurants and bars around the world,” Vanderpump says in a teaser. “But the best food at Vanderpump parties happens somewhere a little more private — here at my home.”

Of course, there’s a formula: In each episode, Vanderpump throws a themed soiree, complete with bespoke party games, like rosé pong. In the teaser, the former Real Housewives of Beverly Hills star rattles off her personal dinner party commandments, like “You gotta bust your butt for the decor to be absolutely fabulous” and — just before she’s seen mooning the cameras — “The guests should be naughty, but the hostess must always be naughtier.”

In the premiere episode, she welcomes her good friend Lance Bass, his husband, and Empire actress Vivica A. Fox to a Provence-themed supper. The pretty random but star-studded first season is also set to feature Joel McHale, who threatens to raid Vanderpump’s vast wine cellar, and Mario Lopez, who tells a story about the time his daughter “walked in” on him and his wife. Other guests that can be glimpsed in the trailer include Anna Camp, Jeannie Mai, and, for reasons yet to be explained, Margaret Cho spanking Steve-O. True to concept, comedian Gabriel Iglesias and actress Cheryl Hines both admit to having been overserved during their time at Villa Rosa.

Like the gracious host she is, Vanderpump is already picking favorites among her guests. “Meagan Good and I’d sat up to 4 a.m. after we finished shooting. Trixie Mattel and Iggy Azalea were very, very funny,” Vanderpump recently told Cosmopolitan. “I enjoyed Cheryl Hines’ stories about fun times with the Kennedys, and Joel McHale is incredible.” When the wife of JFK’s anti-vax nephew and the Rome-born McHale dine with Vanderpump in Episode 2, the theme is Tuscany, complete with a flaming pasta dish.

Other guests to be Overserved this season include various reality stars, such as Flipping Out’s Jeff Lewis and Real Housewives alums Heather and Terry Dubrow, plus James Kennedy and Lala Kent from Vanderpump Rules. Comedian Loni Love, Jaleel White, and Tori Spelling also swing by, because why the heck not.

The real star, though, is Vanderpump’s $12 million white-on-white-on-white-on-white LA mansion. The show is mostly set in the back garden of her extravagantly chandeliered home, but some scenes allow you a glimpse of the interiors of Villa Rosa. And while Vanderpump insists that the production was a socially distanced affair with a “COVID officer” in charge of testing, Overserved is surely a portal into a different class of quarantine.