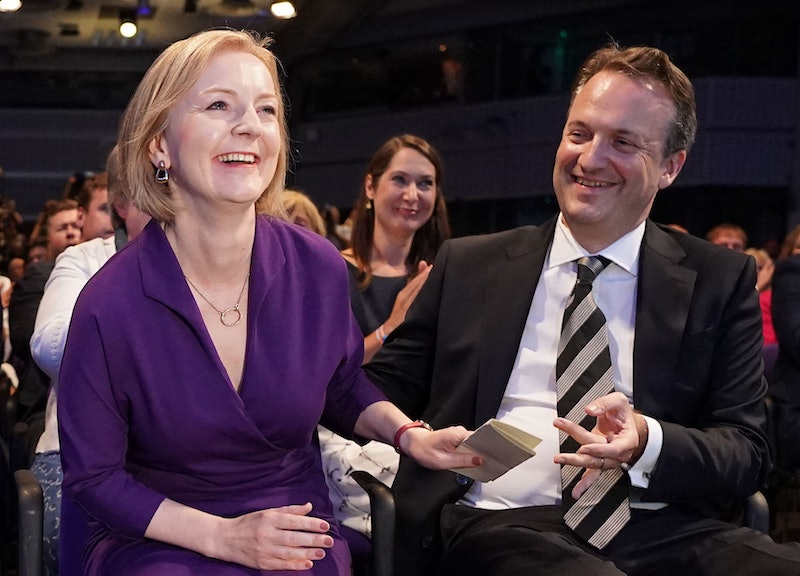 In her first week at Number 10, Prime Minister Liz Truss has already faced a lot. On Sept. 8, it was announced that Queen Elizabeth II had died at Balmoral, just two days after Truss had travelled to visit Her Majesty to be sworn in as the nation’s leader. Now, Truss has joined her fellow MPs in parliament for a long session, which will see the politicians pay their individual tributes to Britain’s longest-reigning monarch. Meanwhile, earlier in the week, Truss made her first official speech as the UK’s new Prime Minister, highlighting her stance on the UK’s key issues. While we’re all too familiar with her political leanings, what do we know of Truss’ life away from parliament? Read on to find out.

Truss’ husband Hugh O’Leary looked elated when Graham Brady — the chair of the 1922 Committee — read out the results revealing that Truss has won the Tory leadership race with 81,326 votes, compared to Rishi Sunak’s 60,399. According to The Times, O’Leary was born in 1974 and lived in Allerton, a “prosperous suburb” in Liverpool, before moving to Heswall in Wirral with his parents and two younger siblings. His dad, John O’Leary, was a college lecturer when he met his mum, Susan, who was a nurse. O’Leary’s father became a solicitor, working for the Rex Makin firm in Liverpool. John O’Leary described his son as “much more serious” than his other children. “He was very studious and whenever I saw him he would have his face in a book,” he told The Times. “He was very earnest and very quiet but a lovely boy.”

O’Leary attended the London School of Economics (LSE) and studied econometrics and mathematical economics before becoming a chartered accountant. Truss also studied economics at Merton College in Oxford, alongside philosophy and politics, per Yahoo!. Both members of the Tory party, Truss and O’Leary met at the 1997 Conservative Party conference in Blackpool when they were in their early twenties. As revealed in an interview with YOU Magazine in 2019, Truss took O’Leary ice skating on their first date, and he sprained his ankle. Three years later, the pair married and would go on to have two daughters — Frances and Liberty.

The teenage girls recently worked with Truss on her campaign to become Tory leader, as she told The Telegraph. “My oldest daughter’s working on the digital team. She’s done a computing GSCE, so she’s helping out on that,” Truss explained. “And my younger daughter was there, as well, giving general political advice.”

Truss doesn’t regularly talk or post about her family on social media. But she did share a picture of her husband on Valentine’s Day in 2019, in the caption, she said of O’Leary: “The love of my life.” Mallika Basu, a close family friend and cookery writer, told the Daily Mail that the couple “are a great team” and are “both keen cooks and very good cooks. She does lovely roasts, he does a good curry.”

But it hasn’t always been plain sailing for Truss and O’Leary. In 2009, it was revealed that between 2004 and 2005, Truss started an 18-month-long affair with fellow Tory MP Mark Field. Following the revelation, Truss was accused of withholding information about it, and she was very nearly terminated as an MP for South West Norfolk. “I am really sorry about that [affair],” she is quoted as telling Eastern Daily Press. “It’s a mistake I made, and as far as me and my husband go, it’s water under the bridge.”

Describing the situation as a “baptism by fire” and “difficult” to YOU Magazine, Truss said, “even though it was a really unpleasant thing to go through, it made me stronger afterwards because I had to have that fight.” When asked if the situation made her marriage stronger, Truss said that while it was “a separate thing,” she was “really happily married.”

More like this
The David Beckham Qatar Controversy, Explained
By Sophie McEvoy
Mollie King & Stuart Broad Just Shared The First Pic Of Their Baby
By Sophie McEvoy
'Waterloo Road' Is Back, With More Than A Few Familiar Faces
By Sam Ramsden and Vivian Iroanya
Matt Hancock's “Cringe” Jungle Karaoke Left Twitter Reeling
By Sam Ramsden
Get The Very Best Of Bustle/UK