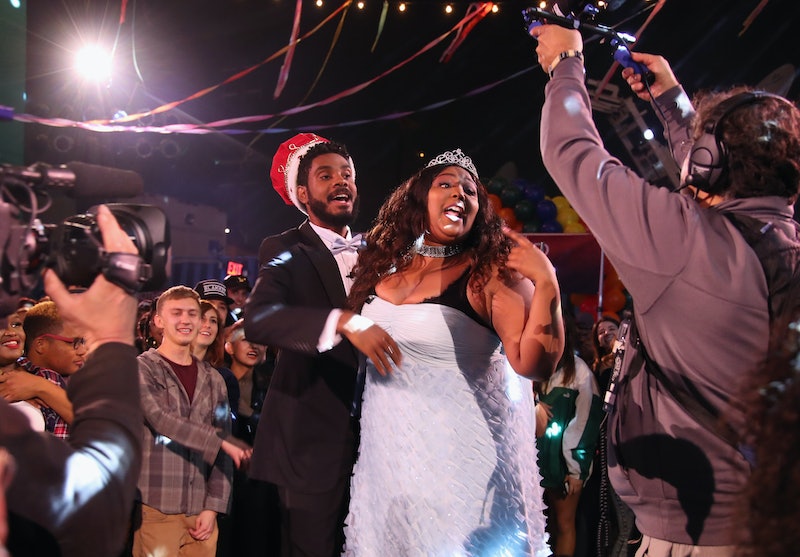 After multiple sightings with a mystery man since Valentine’s Day, Lizzo finally made her relationship red carpet and Instagram official in June. Myke Wright stood proudly alongside his famous girlfriend at the premiere of her show Watch Out For The Big Grrrls on June 6. Though the two have kept their relationship low-key, it appears Lizzo is now more open to talking and singing about her boyfriend on her fourth studio album Special.

“It is a love album,” Lizzo told Variety. “I think that I will never be the kind of artist that’s like this album is about a story I wrote; it’s not real. I’m always just a very personal, like I’m-talking-to-my-friend-on-the-phone-with-really-good-music-behind-me b*tch.”

After the album’s July 15 release, Lizzo spoke to Zane Lowe on Apple Music 1 about being inspired by love. “I think love is the heart of this album. I think everything I've been doing prior to Special was in pursuit of love. And it was like, Cuz I Love You was [an] almost autobiographical album about who I want to be. When I wrote ‘Soulmate,’ I was crying in the studio, and I was like, ‘OK, I’m writing a song about the person I want to be, I aspire to be.’ ‘Truth Hurts,’ I was crying in the studio, writing songs about who I want to be. And now, Special is almost a celebration of who I am right now, it’s very present. And I think the only place love can really exist is in the present.”

Naturally, sleuths are already pinpointing which of Lizzo’s Special lyrics reference her new boyfriend. Here are seven lyrics that could be about him.

1. “I never had nobody with a love like you / It would be a shame not to see this through / Who gon' put up with your Gemini sh*t like I do?”

This one’s pretty literal. Wright, 35, was born on June 9, 1987, making him a Gemini. The full second verse reads: “And my love so good it hurts / You make it work ’cause you know my worth / And I can have any man I want / But I never had nobody with a love like you / It would be a shame not to see this through / Who gon' put up with your Gemini sh*t like I do?”

In her appearance on The Breakfast Club, Lizzo spoke about her relationship with Wright and how she’s afraid of monogamy and all of its “rules.” She added that she’d prefer not to call her relationship monogamous even if it ends up being exclusive. “I’m not worried about anybody else sexually, romantically, emotionally. I’m just worried about you. I’m just thinking about you,” she said. “I think a traditional relationship scares me for 10 years, but love is forever. I can love somebody forever. I think that’s what we have, which is the most beautiful, pure thing ever.”

While it’s unclear if the two had major problems to prompt needing “to make up,” like in the song, her lyric — “even if it’s gon’ take us all of our lives” — could mean just that: forever.

In “2 Be Loved (Am I Ready),” Lizzo explores whether she’s ready for a relationship after leaving a bad. She says she “don’t want a man,” but she’s also “way too fine to be here alone.” Eventually, she decides she’s ready. “Yesterday, I would have run away ... I don’t know why, but I'm ready.”

Asking how she’s “supposed to love somebody else” when she doesn’t like herself, she adds, “Guess I better learn to like this,” before going into who or what she’s gonna have to “take my whole life” to learn to like. In the song, one line, in particular, seems to allude to her new man: “He call me Melly (Ayy), ... Girl, is this my boo? (Is this my boo?)”

In The Breakfast Club interview, Lizzo, whose real name is Melissa Jefferson, spoke about how the people closest to her know her as Melissa. “They don't give a sh*t about ‘Lizzo’ with the chain on. They care about ‘Melissa,’ and everyone I’m close with has known me before all of this happened and I think that's important,” she said. “Even the man I’m with, he knew me before all of this too. We were friends. It hit different when they knew you before 2019.”

4. “In Tulum, we pretended we’re married / And that little tiny house was our home”

Lizzo’s final track on Special is called “Coldplay,” and it samples Coldplay’s “Yellow.” In Lizzo’s first verse, she sings: “In Tulum, we pretended we're married / And that little tiny house was our home / It was so freein’ to know that we made it / To know that I never ever will be alone.”

Speaking to Lowe, Lizzo confirmed that all of those things happened. “This is one of the most literal songs I’ve ever written,” Lizzo revealed. “Everything I say in the song actually happened. I sat in the booth and was like, ‘So yeah, I remember when we went to Tulum, we pretended we was married.’ I talked for like 25, 30 minutes on that loop. And then I felt really raw and sensitive about it.”

5. “It made me sad, I cried / Singin’ Coldplay in the night / Dancin’ to no music just feels right with you”

In the same Apple Music 1 interview, Coldplay’s Chris Martin called in via FaceTime, and Lizzo further explained the story behind the title and these specific lyrics: “Goin’ to sleep, holdin’ hands at the sunrise / Wakin’ up, holdin’ hands in the rain / I feel so goofy, I don’t really do this / But with you is healin’ how I feel pain / It made me sad, I cried / Singin’ Coldplay in the night / Dancin’ to no music just feels right with you, ooh-ooh”

That moment was also biographical. “I was with somebody and I was just looking at the stars and I was with him and I was singing it and tears just were coming to my eyes,” Lizzo told Martin. “You have such an incredible ability to move people with the poetry of your lyricism. So thank you so, so much. It’s so real.”

Martin, who was all praise for Lizzo, later joked about the song being “her hookup song” and inquired as to how her man reacted to the song. Happy to report: Wright enjoyed it.

Though practically all of “Coldplay” could be about Lizzo’s man, this lyric of their relationship being “five years in the makin’” stands out. Lizzo previously spoke about her man knowing before she became Lizzo — so he could very well be the one she’s referring to in the lyric “five years in the makin’, didn’t know if we would.” In fact, on Getty Images, photographs of the two together go as far back as 2016 when they were just friends.

Wright is also from Detroit, Lizzo’s hometown before she moved to Nashville and Minnesota, so they could’ve known each other from way back and maybe had their own “Will they won’t they?” situation.

Though “I Love You B*tch,” could be seen as Lizzo’s love song to herself, it could also be about her relationship. Lizzo sings: “I was at my lowest, your girl was goin' through it / Remember, remember? Ooh / I said, gimme your heart, no repo / Figured me out, no cheat code / Gimme your hoodie when I’m cold.” The lyrics could be referring to the time after the Minnesota Viking, which could also have been around the time Lizzo was facing hate online. She could be referring to her man being there for her through the tough times. And the hoodie part? He does wear them well.