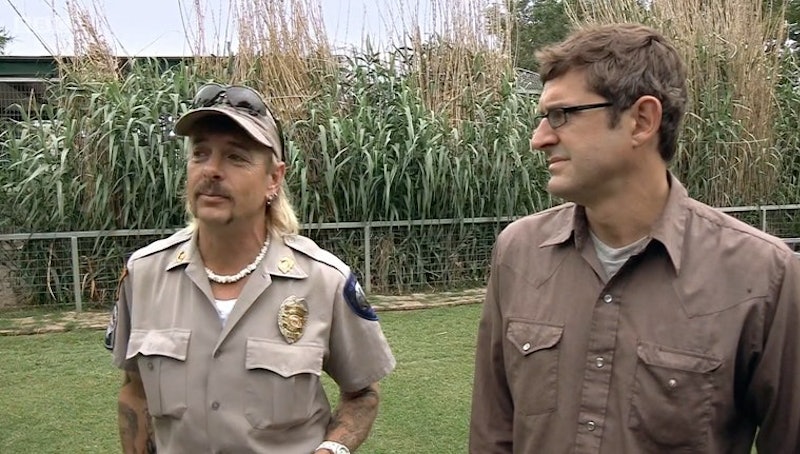 Many first learned the name “Joe Exotic” in early 2020 when Netflix’s Tiger King became the saving grace of lockdown one. However, a few months later, fans were surprised to discover that another Tiger King documentary already existed, with filmmaker Louis Theroux having visited Exotic in 2011 for his series America’s Most Dangerous Pets. Now, more than a decade later, the documentarian will re-visit Exotic’s story and examine what happened to zoo keeper’s life in the years since they met.

“This is one of those quintessentially American stories, taking place in the heartland of Oklahoma, with a cast of characters almost too colourful and larger-than-life to be believed,” said Louis Theroux in a statement about his upcoming show.

“I spent eight or nine days filming at the park back in 2011, over the course of three separate visits. I’d forgotten how much we shot until I went back into the footage during lockdown. It’s extraordinary how much was there.”

He added: “Since then, the story just got stranger and bigger, and in going back at the end of last year I uncovered a real-life drama that took me in directions I never could have expected.”

In his new 90-minute documentary, Theroux will showcase never-before-seen footage from his visit in 2011 and also meet with the team trying to get Exotic out of prison. He’ll also speak to Exotic’s loved ones, some of whom have never spoken on camera before.

The documentary is yet to be given an official air date but there are more Tiger King programmes to look forward to, with Nicholas Cage billed to play the zoo keeper in a drama series.

The more Tiger King content, the better, I say...