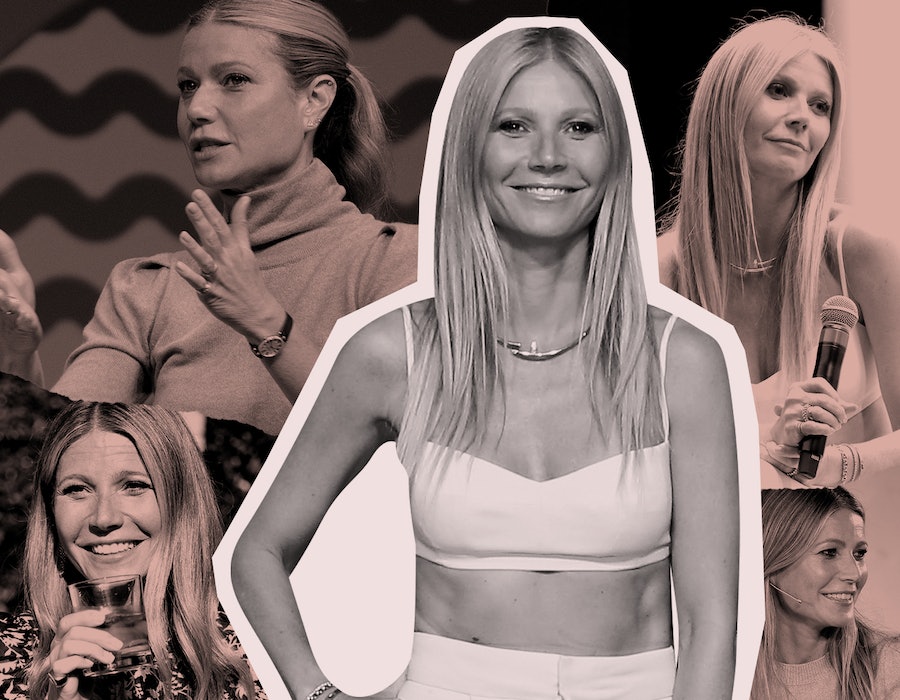 About once a month or so, a Gwyneth Paltrow headline makes its rounds on Twitter. The story is something different every time. To my memory, the last few Gwynethisms have been (1) she ate bread during quarantine!, (2) there’s going to be a Goop cruise!, and (3) she’s selling an orgasm-scented candle. The subtext is always the same when these stories surface, namely: Can you believe just how Gwyneth Paltrow she is?

What does it mean to be Gwyneth Paltrow? Like pornography or being cheugy, it’s easier to identify than it is to describe. The idea of Gwyneth Paltrow is an amalgam of $13 turmeric juices and restrictive low-carb portion. The Goop Gift Guide is a late-capitalist night terror. It’s wellness as wealth, a designer accessory divorced from actual science, in which the only arbiter of success is how you feel. It’s good sex, unapologetic fake tanning, and obscenely expensive travel plans. Gwyneth Paltrow is a the human manifestation of white women saying “namaste” after a yoga class, well-meaning and all smiles. It’s no longer really that fresh or original to make fun of women who like crystals or eat kale, but Gwyneth Paltrow is so wealthy, so larger-than-life, so celebrity, so Goop, that jokes about her remain, like death and taxes, perennial. A constant quarterly Twitter punchline.

What is with our obsession with making celebrities relatable? Celebrities are not relatable.

Truly and almost without irony (a-squirt-of-lemon-juice-in-a-quart-of-alkalized-water amount of irony), I adore Gwyneth Paltrow as a celebrity and an idea. To get the obvious out of the way, I am not a follower of any Goop ideology, nor could I even afford it if I wanted to be. I use Maybelline concealer and drink Keurig coffee. I’m sure Gwyneth would clutch a well-moisturized hand to her heart if she saw how inflexible my hamstrings are and discovered how often I forget to use sunscreen altogether. Gwyneth’s lifestyle is so wildly out of touch with the average American woman that even I, a coastal elite in the entertainment industry, find it laughably prohibitive. To that I say, “Good!”

What is with our obsession with making celebrities relatable? Celebrities are not relatable. They are people with incredibly symmetrical faces and more charisma than should fit in a human body who become accustomed to private jets and crowds of people shouting their name. They get free spa treatments and clothes and full squads of people designed to make them look like they were born without pores or cellulite. Us Weekly may have shown us that A-list celebrities are “just like us” because they also sometimes go to the grocery store, but then they bring those groceries back to multimillion dollar homes in Santa Barbara where a small army of agents and assistants are waiting to help them decide whether a franchise or prestige mini-series is the better move for their career in the long term.

Social media has lowered the gates between the Celebrities and the Normals, allowing us full access to their daily lives in a way we had previously only been able to see in tiny glimpses via late-night talk show anecdotes. “Likability” is a nebulous moving target. The line between relatable and pandering becomes very thin.

She is demonstrably not relatable, and I find it delightful that she doesn’t pretend to be.

The thing I think I like best about Gwyneth Paltrow is I’m fairly certain that her public persona is actually just who she is. She is out of touch, well-meaning, slightly obsessed with a nebulous idea of wellness that’s more about spending money and patting yourself on the back than following genuine medical advice. And why shouldn’t she be?!

Gwyneth Paltrow is the daughter of a famous movie star and a successful producer who spent her childhood flitting between continents and private schools. (A favorite sentence from her Wikipedia: “She is also conversant in French, as her family frequently traveled to the South of France throughout her childhood.”) She’s been a movie star since she was 19, and one of the most genetically blessed people this side of Santa Monica. She is demonstrably not relatable, and I find it delightful that she doesn’t pretend to be.

Gwyneth Paltrow probably does use candlesticks that cost as much as my rent! She probably eats salads that contain more foods I haven’t heard of than foods I have. That’s just who she is! We can’t ask her to be anything else; we could as easily ask the sea to remain on the shore.

Be out of touch! Be ridiculous! Be obscene. How much better than being boring.

My Goop fandom isn’t about Gwyneth being a great actor, which — I’m sorry, I know it’s annoying when the kids of famous people are actually good at things — she is. Just objectively, she’s a good actor! I don’t know what to tell you. Yes, I know Shakespeare in Love shouldn’t have won Best Picture, blah blah blah, but she’s really compelling in it! Go back and watch The Talented Mr. Ripley and try to convince me she’s not charm incarnate. Emma? A Delight. The Royal Tenenbaums? Instantly iconic. You don’t have to like it, but you know it’s true.

I love Gwyneth Paltrow because she never pretends to be anything other than incredibly wealthy, incredibly privileged, and completely out of touch. Celebrity is a mutually beneficial relationship: We give you the attention and validation you need and a route to extreme wealth, and in return you give us a window into the sun-kissed and the glamorous. Be out of touch! Be ridiculous! Be obscene. How much better than being boring.

More like this
Rita Ora Finally Opened Up About Marrying Taika Waititi & Their "Perfect" Wedding
By Sophie McEvoy and Catharina Cheung
Stephen Graham & Steve McQueen Are Working On A Wartime Drama
By Darshita Goyal
Armani Jackson Is Following In His Famous Actor Sister’s Footsteps
By Catharina Cheung
Vanessa Bauer Is Reportedly Dating Her 'Dancing On Ice' Partner
By Darshita Goyal
Get Even More From Bustle — Sign Up For The Newsletter
From hair trends to relationship advice, our daily newsletter has everything you need to sound like a person who’s on TikTok, even if you aren’t.