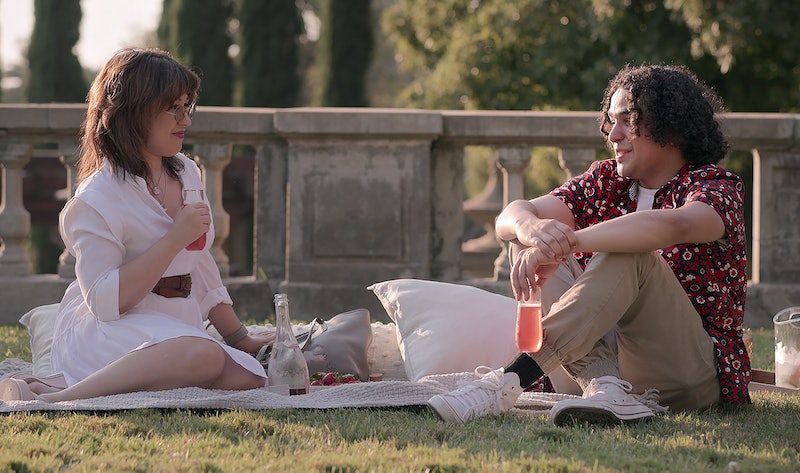 When Australian reality show Love on the Spectrum debuted in July 2020, it shed a light on what dating is like for people on the autism spectrum: pretty much the same as it is for neurotypical people. “I think people maybe think [it’s] different," Thomas, one of the cast members, told Bustle. "It’s not. We love each other; we have fun together; we fight; we go on dates."

As creator Cian O'Clery explained to Screen Australia, the idea for the show first came about when he was working on another series about people with disabilities. “We were getting to know these people really well and finding out about what their hopes and dreams were in life in general, and it just kept coming up that people really wanted to find love,” he explained. “And it seemed like there wasn't a lot of support out there to help.”

The Australian series introduced established couples like Ruth and Thomas alongside singles like Chloe and Olivia. The show was so popular that it debuted a second season in May 2021, bringing back fan favorites like Michael (who was even featured on The Ellen Show) and couple Jimmy and Sharnae. More recently, O’Clery’s work inspired an American spin-off titled Love on the Spectrum U.S.

In Season 1, we meet singles like Dani, James, Kaelynn, Subodh, and Abbey, who each go on a number of dates with varying degrees of success. It’s unclear which of these cast members would return for a second season, but O’Cleary told Screen Australia that they are always looking to showcase a variety of people on the spectrum. “Everybody's different. You've got people with very low support needs who are highly intelligent, who have great jobs, who are professors, and you've got people who need support 24 hours a day,” he explained. “So I think that's really important and that's really a great opportunity to be able to share these people's real life stories.”

He added that they always tell the cast that “we're filming this show on your terms,” which means working around their schedules and comfort levels — even stopping the dates when they become too overwhelming — rather than force the cast to stick to a set filming schedule. So expect that if anyone returns for a second season, it’s because they’ve chosen to continue telling their story.

The original series was renewed for a second season two months after its July debut, and the new season came out eight months later. If the U.S. spin-off follows the same trend, we will hopefully see a second season debuting around spring 2023.

This post will be updated as more Love on the Spectrum U.S. Season 2 details become available.

More like this
‘The Ultimatum: Queer Love’ Is Officially On The Way
By Radhika Menon and Kadin Burnett
Here’s When You Can Expect More ‘Indian Matchmaking’
By Brad Witter
Netflix's 'Bling Empire' Season 3 Trailer Includes A 'Selling Sunset' Cameo
By Kadin Burnett and Sam Ramsden
Here's How To Apply For 'Love Is Blind,' No Matter Where You Live In The US
By Grace Wehniainen
Get Even More From Bustle — Sign Up For The Newsletter

This article was originally published on May 18, 2022