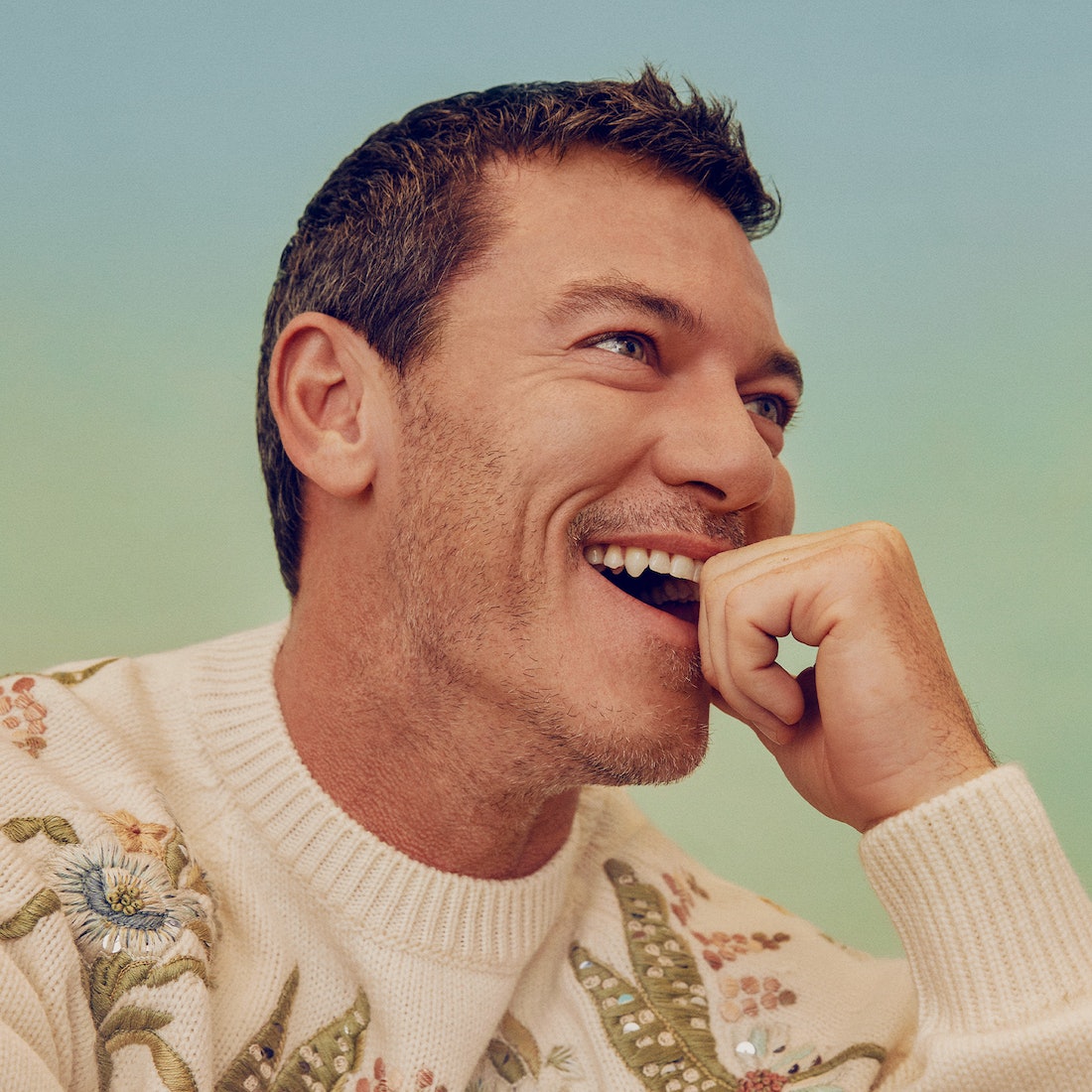 Luke Evans is running through his work schedule for the rest of the year. “I go to New York, go to Los Angeles, do a premiere, come back, shoot a movie, finish that, go on another press tour. Then I have another film to shoot at the end of November, as well as doing another TV thing, which I can’t talk about yet. Then I’m going to do another movie at the beginning of December for another week in Acapulco. And then I’m around for press, and then I’m flying to Japan to do something there. And then I get Christmas! ” He exhales, shaking his head in mock exhaustion. “It can be done, and while I can and still enjoy it, why not?”

Evans, 43, is zooming in from Madrid, the city where his partner, Fran Tomas, a Spanish graphic designer, is based. It’s early morning and Evans leans back on a sofa, rubbing his eyes and intermittently sucking on a vape. He only landed in Madrid a day or so ago. Before that, he was in Ibiza, and Portugal prior to that. Tomorrow, he’ll go home to London for a couple of nights. In case you haven’t got the memo, Evans is not a man who stays in one place for long. Nor is he someone who makes a habit of turning down opportunities.

“I want to be able to say yes to everything,” he says in his gravelly, mellifluous Welsh lilt. He’s wearing a navy polo shirt that reveals a thin, tattooed band around his right forearm. Salt and pepper stubble runs across his jaw. “I have always been a yes person.”

To say this philosophy has served him well would be an understatement because, on paper, Evan’s trajectory is an unlikely one. He was born in Pontypool, South Wales, and raised in Aberbargoed as a Jehovah’s Witness. At school, he was bullied for his religion, and at home, his (very loving) parents, David and Yvonne, forbade “movies with sex, swear words, violence, anything supernatural.” At 16, he left the religion and his home for Cardiff in search of work and a community where he could live freely as a gay teenager. How did his parents react? “It was difficult, but we love each other and love overrides everything,” he says. Today, the three of them are “very, very close.”

In Cardiff, he worked as a mailboy in a bank. He sold shoes in River Island. He took a job as a “labourer on a construction site, building walls in council properties all over Cardiff and the Valleys.” Nothing about these early years foretold a career as a Hollywood star capable of switching between big-budget franchises (The Hobbit, Fast & Furious), Disney live action remakes (Beauty and the Beast and Pinocchio, which is the reason we’re talking today), and prestige TV dramas (The Pembrokeshire Murders, Nine Perfect Strangers) but Evans, an only child, had never been a normal kid. “God bless ’em, they gave birth to a firecracker of a child!” he says of his parents.

His various jobs allowed Evans to save money for singing lessons, and at 17, he won a scholarship to the London Studio, a dance and theatre school. He arrived in the city on the day that Princess Diana died (“I remember driving into central London,” he recalls. “I even saw her hearse go by from [RAF] Northolt, where she’d landed, and the family [driving] behind,”) and spent his 20s performing in West End musicals such as Rent, Miss Saigon, and Piaf. “Musical theatre was great, but I wasn’t at any kind of starry level,” he says. “I was saving pennies to afford my rent. At 26, I said, ‘If I’m still struggling at 30, I’m giving up.’” What would he have done instead? “I come from a family of very practical, working class people… I could stand on the door of a nightclub; I could serve you a meal; I can work as a P.A.; I can cut hair.”

But, of course, Evans never had to fall back on his plan B. In 2008, while performing in Small Change, a play about young men coming of age in ’50s Cardiff, he was spotted by an agent. Not long after, he landed his first film role in a 2010 Clash of the Titans remake, playing Apollo. The parts haven’t stopped rolling since.

There is a boyish energy to Evans, who talks fast and isn’t afraid to poke fun at himself. This playfulness goes some way to suggesting why a man who comes across as warm, witty, and perennially upbeat — the kind of person who would be great company at the pub — is frequently cast as a villain. In Pinocchio, which stars Tom Hanks as a doddery, big-hearted Geppetto, Evans plays The Coachman, luring mischievous children to Pleasure Island, where they are swiftly sold into slavery. He depicts the character as a sinister Artful Dodger with pale, sweaty skin and eyes that roll in their sockets as he belts out one of the film’s four original songs. As the misogynist Gaston in Beauty and the Beast, Evans inhabited a version of evil shrouded in toxic masculinity. Why is he drawn to these abominable men? “Well, I don’t [get] drawn to them,” he chuckles. “I just get offered them.” And why is that? “I’m good at them,” he shrugs. “Maybe because it’s so far removed from who I am. … If you pick characters where you really have to shed your skin and put on theirs, it’s much more difficult. It’s much of a deeper dive into a person and the psychology of a human being.”

Josh Gad, who played Gaston’s long-suffering sidekick, LeFou, has his own theory. “Luke is so damn disarming,” he says. “He just has the charisma and charm that suck you in and force you to ask yourself, ‘How can I unabashedly love someone who is such a monster?’”

When picking roles, Evans’ unofficial mantra is to look for stories that make audiences think ‘We haven’t seen that before.’” Alongside Billy Porter, he’s just finished filming Our Son, a film about a divorcing gay couple who fight over custody of their young child. It’s the second time Evans has played a gay role; the first was in last year’s Nine Perfect Strangers. “It was emotionally one of the most traumatic things I’ve done,” Evans says of Our Son. “The story is so real. It’s what people are going through the whole time, and it’s very relatable — not just to the gay community.” Yet, he knows that the significance of studios making queer relationship dramas for mainstream audiences cannot be overlooked. “We’ve seen some amazing films that definitely needed to be told — like Milk… Nowadays, there are also all these wonderful TV shows about the younger generations. They don’t have to be so sensational about a historical story about the fight that gay people have had through the decades. Of course, there is still room for those stories. There is also room for stories about everyday life.”

Playing a father onscreen is a “little workshop” for when Evans becomes a parent himself. He has spoken in the past about wanting to have a child before he is “old.” Does he have an age in mind? “I want to do all the things physically that a young kid would want their dad to do,” he says. “I don’t want to be [saying], ‘I can’t do that because of my back.’ ... I think I’ve still got a good decade before any of those things are a problem.”

It was emotionally one of the most traumatic things I’ve done.

He’s unfazed by the prospect of balancing fatherhood with his frenetic work schedule. “Obviously, when kids start school, they possibly would be in one place so dad wants to be around,” he says in a way that makes it clear it’s a subject that he has considered deeply. “Although I have had very good friends who have had extremely successful careers in this industry, and I’ve spoken to them about it, and they said they just took their kid with them and their kid didn't suffer at all. They went to different schools and they just made it work — the travelling circus of life.”

When it comes to his love life, Evans is understandably guarded. In Ibiza, a couple of weeks ago, he and Tomas were photographed embracing in the sea by paparazzi. “If someone is hiding in a bush and taking a picture, as much as I would not like them to do that because it’s a massive intrusion of my privacy, what control do I have?” he says, stiffening slightly. The relationship is relatively new (in January of 2021, Evans confirmed in an interview that he was single) and the couple “live between” Madrid and London. They speak to each other in “mostly English,” even though Evans is determined to perfect his Spanish, having started online classes during lockdown. “I can understand probably 90% of what I hear,” he says.

When he’s not working, Evans surrounds himself with an eclectic group of friends. “Honestly, Luke is one of the most fun and hilarious human beings off set I have ever met,” says Gad. “He loves all things fun, including great food, any opportunity to sing in a public space, and an establishment that serves endless glasses of Aperol spritz.”

In February of this year, certain corners of the Internet erupted in delighted puzzlement when Phillip Schofield posted photos of himself on a skiing holiday with, among others, Evans and Tomas. (The interior designer Kelly Hoppen was also present.) There was only one question on everyone’s lips: How on earth does the Hollywood superstar Luke Evans end up kicking back in the Alps with Britain’s king of daytime TV? Evans flashes a wry smile. “There’s a very simple answer. The Prince’s Trust. We’re all ambassadors … They’re lovely people, and they’re very British, and I miss my British life.”

Lorraine Kelly is another unlikely friend. This summer, Evans, an Adele superfan, was one of thousands who watched Tottenham’s finest return home to perform in Hyde Park. “I stood next to Lorraine Kelly and her daughter. We had the best evening. We sang every song, arm in arm, watching the sun go down glowing on Adele’s face on these big screens.”

I have one final question for Evans. As the rumour mill continues to swirl over who will replace Daniel Craig as James Bond, his name is consistently mentioned. Are audiences ready for a gay 007? “I don’t know what the current temperature is with audiences, whether they care enough to worry about what James Bond does in the bedroom,” he says carefully. “I don’t think it really matters at all to the character if I’m really honest,” he adds, launching into an account of Echo 3, the Apple+ action thriller series coming this autumn. In it, he plays a “Delta Force special operative soldier from the American army.” Preparation for filming, which largely took place in Colombia, involved training with Navy Seals and hiking the Appalachian Trail. “The reason I said we should talk about Echo 3,” says Evans with a cheeky smile, “is when you talk about James Bond, that kind of training, every day I was playing that special services kind of character who you put into any environment and [he] survives.” He’s being deliberately vague but the subtext is clear: Luke Evans is ready for it all.