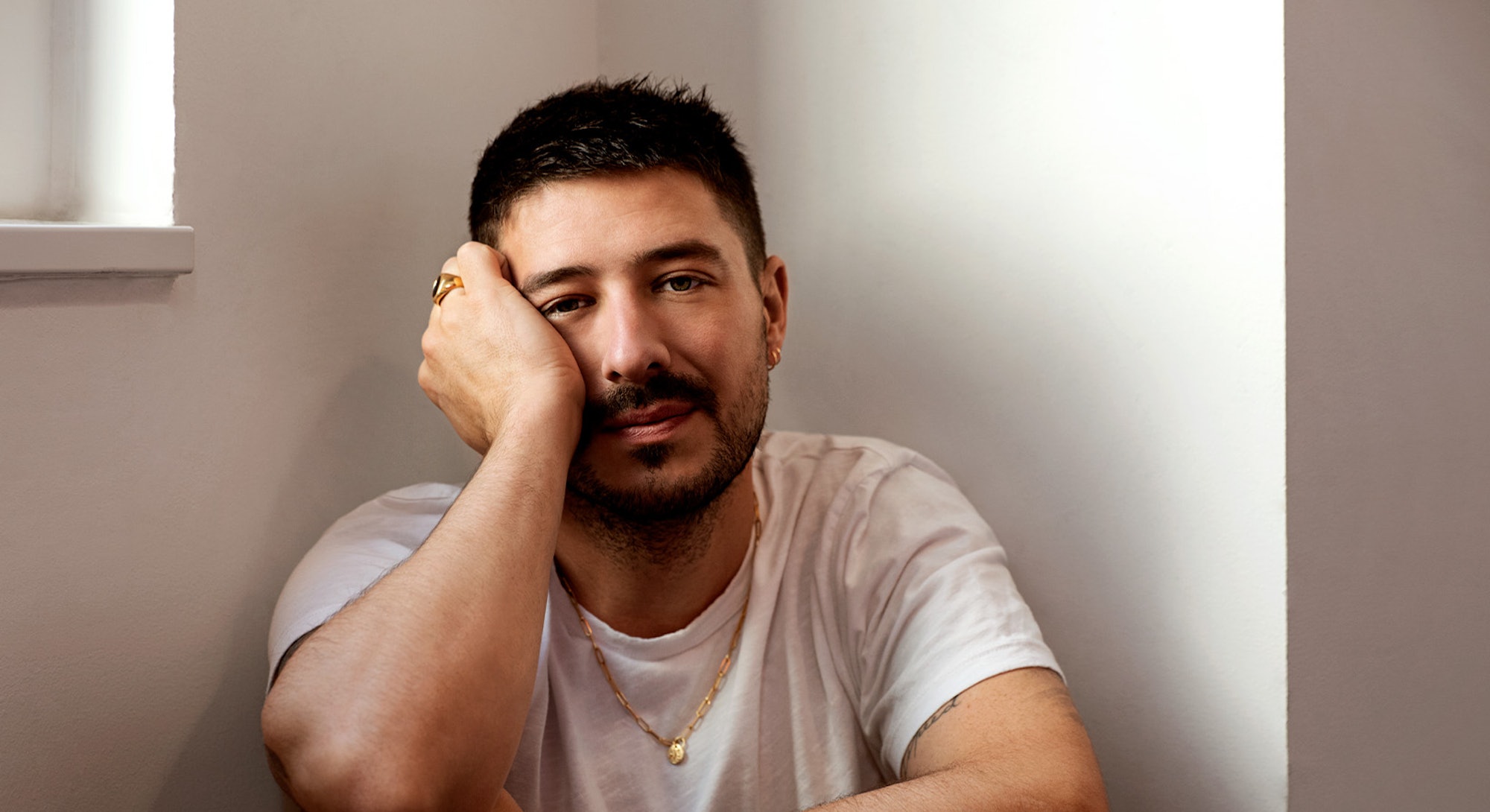 Marcus Mumford loves the C-word. For a Brit like him, the term doesn’t have any gendered or derogatory context — if someone calls him “a good cunt,” it's the highest of compliments. “For some reason, I found myself an apologist for that word,” he says, waving around a Styrofoam cup of coffee in a Flatiron hotel lobby a few hours ahead of his tour stop at New York City’s Beacon Theatre. Recently, he’s become “a bit more of a cunt” himself, which he promises is a good thing: more confident, less concerned with people-pleasing. All it took was making the most soul-baring record of his career.

It wasn’t something he planned. He was riding out the pandemic at his family farm in Devon, England, with his wife, actor Carey Mulligan, and their two kids, enjoying the slower pace of life off the road. “COVID was the longest period of time I've had at home since high school,” he says, fidgeting with his wedding ring. But he felt the itch to be creative again, so at the beginning of 2021, “I made a commitment to myself to write songs and follow where the songs led,” he says. “I just wanted to get back to being a songwriter, really.”

He thought he was writing a new album for his band, Mumford & Sons, whose folk-rock anthems like “I Will Wait” were inescapable in the early 2010s — and made the band a punching bag for anyone annoyed by the proliferation of banjo-forward imitators who followed them onto the airwaves. (Mumford no longer minds this: “I think that’s funny that my name is associated with negativity now and jokes,” he says. “I think it comes with the territory of being in a big group.”)

But once the material started flowing, it was clear to Mumford — and his band mates — that the songs were probably better suited to a solo project. They were grittier and more conceptual, and seemed to be telling a very specific story. That’s partly because, as he revealed in a GQ interview earlier this year, he was writing for the first time about the sexual abuse he experienced as a child — something he hadn’t discussed with anyone for decades until it came out in the music. “A lot of the songs I wrote for the band are about shame,” he says, breaking into a nervous laugh. “Now, I kind of understand better why.”

Mumford squirms a bit on the sofa when talking about himself; music is still the easiest place for him to express his emotions. He calls analyzing his own work “a very narcissistic enterprise.” “I never really like to go in too much about the meaning of songs. My least favorite thing in the world is showing up to an open mic and someone giving you a five-minute lecture on what the song they're about to play is about,” he says. “I'm always like, ‘Just play me the fucking song and I'll decide what it's about!’ I don't want to be dictated to.”

But with (Self-Titled), released in September, he’s trying to be more open about his journey. About how alcohol had started to become a problem for him a few years ago, so he went to therapy and got sober. How in therapy he started talking about what happened to him and investigating how that shaped him. “It felt like a challenge to me, to be comfortable in my own skin for the first time in my life,” he says. “But I don’t really feel like I’ve got much to hide at this point.”

(Self-Titled) opens with a song called “Cannibal,” and the subject matter couldn’t be clearer: “I can still taste you and I hate it / That wasn’t a choice in the mind of a child and you knew it.” Nothing about it is meant to be easy to listen to. “The first time Carey heard ‘Cannibal,’ the big bit at the end where the band comes in, she took her headphones off and was like, ‘I hate it,’” Mumford recalls. “And I was stoked! I was like, ‘That’s what I wanted from you: I wanted it to repel you in some way.’ Knowing her sensibilities like I do, I didn’t want it to be a warm blanket song.” (Of being married to a fellow creative, he says, “I quite like the moments when we disagree [on artistic work].”)

The rest of the record, however, moves beyond anger — its 10 songs chronicle his journey toward healing, even forgiveness. “I don't want to live either in a victim space or in a space of anger,” he says, explaining the album’s emotional arc. “But it's also [about] being more forgiving in general. And I think at the moment, the cultures we live in, both in the states and in the U.K., and I suppose globally, forgiveness feels like it’s at a deficit. And the idea of having compassion for people even who do really gnarly shit or heinous things is, I think, at a low ebb.”

“I was starting to take it for granted, just rolling up to an arena and playing a show and going through the motions.”

During these past few years, Mumford says he sought support from “anyone who would work with me.” That meant mental health professionals, but also people like lawyer and social justice activist Bryan Stevenson, whose book, Just Mercy, inspired Mumford to write the song “Stonecatcher” — and later invite Stevenson himself to play piano on it. “He's in that school of truth and reconciliation: looking at the truth first and correcting the narrative and recognizing where it's false so that you can get to a place of reconciliation,” Mumford says.

Stevenson is not the song’s only notable guest: While working on the album in LA, Mumford found himself in the same studio complex as pal Phoebe Bridgers, who contributed vocals to the song (and had him return the favor on her cover of Tom Waits’ “Day After Tomorrow”). “She was pretty stoked on the first couple songs she heard, and then I played her the first demo of ‘Stonecatcher,’ and she literally said, ‘Did you get the word ‘heinous’ into a song? That's dope. I'll sing on it.’” He’s hoping to catch Bridgers on tour next year as she opens for Taylor Swift, whom Mumford also collaborated with on the evermore track “Cowboy Like Me.” “What do you call a Taylor Swift fan? Is it a Swiftie?” he asks. “I am [one] too now.”

All the featured artists on the album — Bridgers, Clairo, Brandi Carlile, Monica Martin — are women, which Mumford says was not a coincidence. “I found that there's a lot of vulnerability and weakness on this record, and it was a woman each time who came and lifted me over the brick wall I hit,” he says. Being around that kind of “feminine energy” was necessary: “Each of the women that came along put an arm around me and said like, ‘We're with you in this,’ in the spirit of solidarity that I just don't think would have been able to be provided by the group at that point in my life, honestly.”

“The idea of having compassion for people even who do really heinous things is, I think, at a low ebb.”

Is more solo music in the cards? “I don't plan to have another solo album,” he says. “It was just for this particular collection of songs, it felt like the right thing.” In fact, he’s already halfway done writing what could become a new Mumford & Sons record. “That's the next thing for me: to complete that with the lads,” he says, smiling.

When the band returns, it will look a little different: Banjo player Winston Marshall left the group last year following criticism over his support of right-wing figures like Andy Ngo. Mumford sounds nonchalant about the change. “It’s not a marriage — we didn’t make vows that we would stay together forever,” he says. “We always wanted it to feel like a choice, and when it doesn’t feel like a choice, then the choice is to exit. That’s what Win did. So it feels positive to me.”

But the band’s next record will have to be different anyway, because Mumford himself is different now, too. Making a solo record —collaborating with artists he admires, seeing it resonate with listeners new and old — has reignited something in him. “I want to be able to appreciate it more. And I think I’m in the process of doing that, [compared to] maybe five to six years ago, when I was starting to take it for granted, just rolling up to an arena and playing a show and going through the motions a bit. I’d always find something to sing for on any night, and I’ve never played a show I regret. But there were some that I wasn’t as present as I could have been. This process has just made me more grateful. So I want to be more present to that.” Spoken like a good C-word.