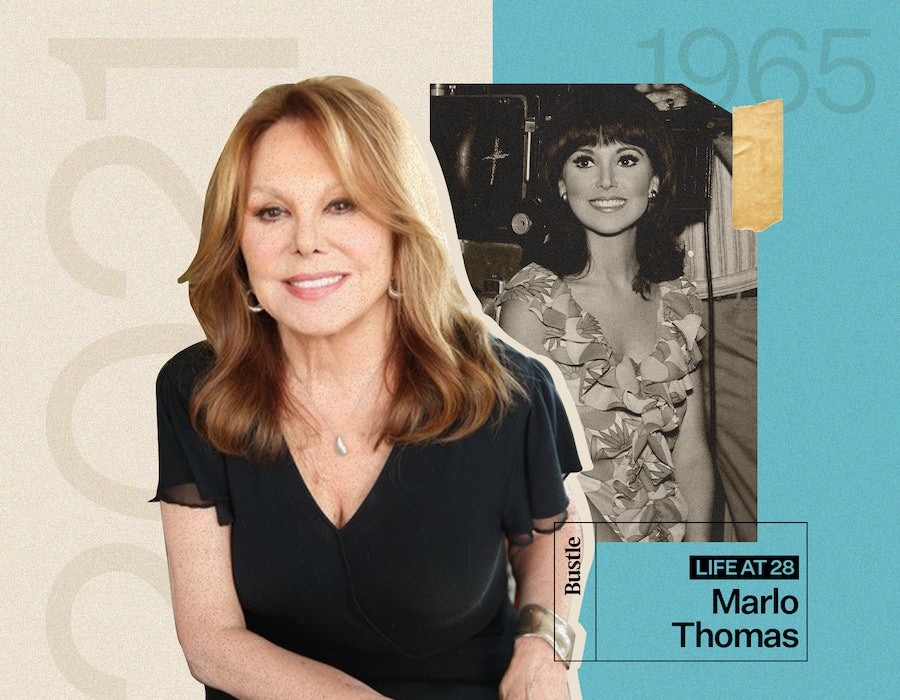 In Bustle’s Q&A series 28, successful women describe exactly what their lives looked like when they were 28 — what they wore, where they worked, what stressed them out most, and what, if anything, they would do differently. This time, Marlo Thomas discusses becoming an icon for single women in That Girl and how the show made her a feminist.

In 1965, a 28-year-old Marlo Thomas boarded a flight to LAX with a suitcase of Mary Quant dresses and her Yorkie — a gift from the producers of her just-wrapped London run of Barefoot in the Park. Thomas’ parents met her at the airport when she landed. Miss Independent — a nickname her father, actor and producer Danny Thomas, had given her as a child — was back home in Los Angeles to film the first season of That Girl. “I have no trouble at all remembering what that year was like,” says Thomas, now 83.

Thomas starred in That Girl as Ann Marie, an aspiring actress with dreams of making it big. The show was an outright hit, spawning a genre of “single girl in the city” sitcoms that’s been in continuous production ever since, from The Mary Tyler Moore Show and Murphy Brown to Sex and the City, Girls, and New Girl. It also minted Marlo Thomas a feminist whose appetite for politics would inspire the iconic Free To Be...You and Me album and whose civic-mindedness would see her inherit her father’s famous children’s charity, St. Jude. These days, Thomas has a new Williams Sonoma tabletop collection and another a gig that her 28-year-old self, who was ambivalent about marriage, likely couldn’t imagine: dishing relationship advice to couples with her husband of 40 years, Phil Donahue, on their new podcast, Double Date. “If I hadn't met Phil, I'm not sure I would have married anybody,” Thomas says.

Below, Thomas looks back at her refusal to let her That Girl character get married, becoming an agony aunt for young women, and giving an ABC producer a copy of The Feminine Mystique.

I was very driven, I was very ambitious, I was very excited. In my 28th year, I'd already made the pilot for That Girl, and it had sold.

Nobody had seen a single girl on television before, so it was heralded by the budding feminist movement, which was just getting started. All the girls and moms at home wanted to be That Girl: [to] have her own apartment, have fabulous clothes, be getting a job, have a boyfriend, [be] living away from her parents. It was like every girl's dream.

It was my idea. I wanted to play a girl who was on her own, graduated from college like I had, wanted to be an actress like I did, whose father didn't want her to leave the house like my father felt. I didn't want to get married and That Girl — Ann Marie — said that a couple of times on the show. It was kind of revolutionary because no [woman] had ever said on television, "I don't want to get married." She was obviously a revolutionary figure, but not as revolutionary as the network feared, because I think every home in America had a That Girl in it.

I had done another pilot that didn't sell, but the ABC producer Edgar Scherick called my agent and said, "We think she can be a TV star." They sent me all these scripts, and I called Mr. Scherick and I said, "All the scripts here, the girl is the wife of somebody or the daughter of somebody or the secretary of somebody. Wouldn't you like to do a show where the girl is the somebody?" And he said, "Would anybody watch a show like that?" I said, "I think so."

I brought him The Feminine Mystique and he read it. He read the book and then he called me and said, "Is this going to happen to my wife?" And it did, by the way.

That Girl was based on something that was happening in the country. Girls are not going from their parents’ house to their husband’s house. They want a life of their own. And that's what I wanted — a life of my own. I had varying degrees of thoughts about marriage. I thought, "Oh, someday I'll get married," I would say to myself. And then sometimes I'd say, "I'm never getting married." So I could never really figure out what I would do. All the men that I dated were nice people. They wanted to get married, but I never wanted to get married until I met Phil [Donahue].

I said, "What kind of country is this where there's no safety for women?" So that's when I became a feminist.

Do you remember when you first read The Feminine Mystique?

No, but I do remember reading it and feeling so much better about everything, because at that point I wasn't sure that I was just an oddball. All the girls I went to college with were married right away. I was a Theta at USC. In our senior year everybody was getting engaged. It was unbelievable. I literally was a bridesmaid 17 times.

I was pinned to a basketball player — just darling. Six-foot-five, a full foot taller than me. I'd have a neck ache when I tried to dance with him. I was crazy about him, but I didn't want to get married.

When you were tying up Ann Marie's story in the That Girl series finale in 1971, it was still important to you that she not get married, even though she’d been dating Don for years at that point.

Clairol was our sponsor and they wanted to end the show with a wedding. I said, "I just can't do that to these women and girls who followed Ann Marie's adventure. I can't now say that the only happy ending is a wedding, because I don't believe it." There was a big ruckus about it, but I wouldn't do it. The last show, Ann Marie took Donald to a women's lib meeting, which made nobody happy but me. I loved it.

It was the right decision. I got so much mail about it. Women writing and saying, "Thanks for not copping out. That was great.”

What was your own involvement with women's lib?

I didn't have any at that time. My mail, I think, is what really politicized me. The mail started coming in and a girl would write me a letter and say, "I'm pregnant. I'm 16. I can't tell my father. What should I do? Where could I go?" Another woman would write and say, "I'm 22 years old, I've got two children and my husband beats me up. Where could I go?" And I was flabbergasted that people saw Ann Marie and me as somebody they could talk to about this. I was the only one they could see that they could tell. I just thought, oh my God.

My secretaries — we called them secretaries in those days — I had two of them. And we were all looking for places in Des Moines where a girl could go, or Cleveland where a grown woman could go for safety or legal aid. There were no places at all to send them, and that's what politicized me. I said, "What kind of country is this where there's no safety for women?" So that's when I became a feminist.

You and Ann Marie became feminists at the same time.

I was always kind of political. I remember at 17 years old I was going door to door getting a petition signed for gun control. So I was always into politics, or into knowing that citizens could make a difference. I got that from my father. As you know from him building St. Jude Children's Research Hospital, he was a man who believed people could make a difference, so I had that feeling. After That Girl, I was a delegate to the Democratic convention in Florida for George McGovern. I think I was pretty much always an activist.

Through Anne Marie, it seems, you became an agony aunt for people at a similar point in their lives. Is there anything you would have changed about your own 28th year, or any advice you’d have for others?

What I enjoyed about that time was that I was very sure-footed. I knew what I wanted and I worked hard. Sooner or later you'll find a door, and the door will open.

When I was struggling to find work as a young actress from the time I was 20 until I was 26 or 27, the going thing was blondes — Sandra Dee and Doris Day. I was definitely not a blonde. Olive skin, brown eyes, dark brown hair. So I was cast as a Hawaiian, as a Chinese girl, which of course you couldn't do today. I was never the girl next door.

The funny thing is, is that when I did That Girl, I was the ultimate girl next door. You can't let somebody else define who you are and who you can be. By the time I got to Ed Scherick and said, "Read The Feminine Mystique," I had been rejected enough that when I got the chance, I went for it.

He looked at me like I was crazy, but he read that book and he realized that something was happening under the ground. It was a seismic, almost measurable, earthquake happening for women in the country. It was changing. It was a big deal.

More like this
At 28, Sharon Horgan Was Hoping To See Damon Albarn At The Pub
By Samantha Rollins
Netflix Reveals First Look At Wednesday In The 'Addams Family' Spinoff Series
By Bustle Editors
Kenan & Kel Just Reunited At The 2022 Emmys & Twitter Is Overjoyed
By Grace Wehniainen
A TikToker Just Proved Gossip Girl's Identity Was Revealed In Episode 1
By Jake Viswanath and Meguire Hennes
Get Even More From Bustle — Sign Up For The Newsletter