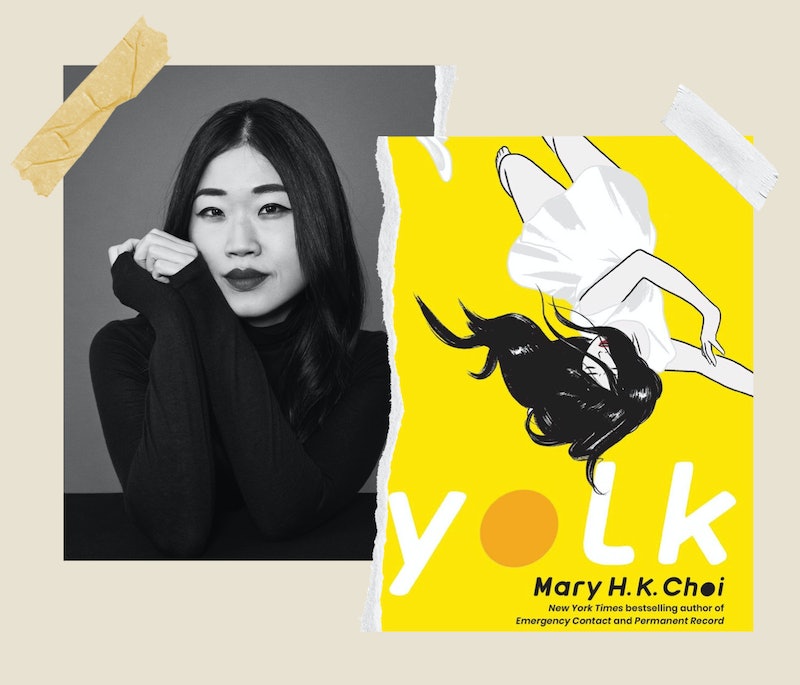 With her first two New York Times bestsellers, Emergency Contact and Permanent Record, Mary H.K. Choi established herself as an author interested in telling messy, real stories from early adulthood. Her third novel, Yolk, works in the same vein. Set in New York City, it introduces Jayne and June Baek, estranged sisters who trade identities when one gets sick and needs to use the other's health insurance. Their ensuing reconnection leads them to question everything they thought they knew about the other, their collective family history, and themselves.

"Yolk is about secrets, and how you’re only as sick as your secrets," Choi tells Bustle. The book is a visceral look at what it means to be a young woman today — Jayne's life is a haphazard swirl of disordered eating, sex, and alcohol — a subject Choi has also focused on in her two decades as a journalist, both as a columnist at Wired and as a reporter on the vagaries of pop culture for Allure, The Atlantic, and GQ. But Yolk also about reconciliation. "Nothing takes the fangs and claws out of a secret faster than just telling [it to] someone, of your own agency and volition, in the words that feel best to you."

So much of Yolk is rooted in the idea of truly understanding other people. Do you think that need to understand what our neighbors are going through has changed in the pandemic?

Really, really early in “panny times," when we didn’t know how long these pathogens would live on surfaces, my friend said to me: “I trust you to make the best decisions for yourself.” That was so beautiful and empowering, because there was so much fear and the notion that if you are irresponsible, I am the one who’s going to pay for it — that zero-sum push and pull.

You can’t be vigilant and hateful toward other people for so long and not have it become a corrosive element in your life. I’m keeping my eyes on my own paper, and that feels really good, because I can’t imagine the brutality and the CPUs you burn up worrying about every single other person and every permutation that every decision they make in their lives can hold. In that sense, my feelings are different [from the beginning of the pandemic].

It’s hard to talk about this book without talking about disordered eating. When you were writing about Jayne’s bulimia, what was most important to you?

I identify as a bulimic. For me, bulimia doesn’t ever go away. I thought I was cured of bulimia for a very long time, and I realized this wasn’t the case when it was brought to my attention that my thinking was still very much in this place of doing something wrong — making food a moral issue — and then trying to fix it in some way. All these reparative, punitive actions were dictating my whole life.

Jayne’s bulimia only comes into sharp focus near the end of the book, so it could fly past readers early on. What made you decide to present her story in that way?

I really wanted to talk about bulimia outside the violence of binging and purging, because that has been, for me, only one aspect of having an eating disorder. My eating disorder is feeling like I can’t live my life until I’m perfect, and genuinely feeling as though my weight and my size determine my value, like the number on the scale is the universal remote control by which I can dictate how other people will treat me, what jobs I can get, and the excellence with which I can do that job. Everything for me has been predicated on this value system that’s based on how thin I am.

The violence of the act of binging and purging is a clear, irrefutable signal of Jayne's bulimia, but I also wanted to highlight it in the obsessive body-checking she does, how inferior she feels when someone is thinner than her, more beautiful than her, seems smarter than her. That zero-sum thinking is also disordered eating, for me.

Does Jayne's hyper-focus on herself make her an unreliable narrator?

Totally, in the way that we are all unreliable narrators of our own lives. In a lot of ways, Yolk is about the personal mythologies around yourself, the mythologies around your family, what your role in that family is, and the version of the story that you’ve always told yourself about what happened, and who these people are, and what they think of you.

There’s so much you don’t want to admit to yourself. My parents are restaurateurs and my mom grew up in famine. There’s nothing more shameful to me than the amount of food I’ve wasted in my life. I’ve spent so much money on food as a tool for self-harm and then gotten rid of it.

Honestly, no. Growing up, I made do. Holy sh*t, like, Alison Monceau in the Judy Blume books — she’s adopted and she’s Asian. I’d been reading Judy Blume forever, learning exactly what it’s like to be a young, Jewish girl on the East Coast, and then there was this Asian girl, and I was like, this is amazing. And of course, Claudia Kishi from The Baby-Sitters Club — the fact that she was fashionable and stylish and into art, which was definitely my story as a child, was so meaningful to me. Amy Tan. All of that was so informative.

When people [in my books] speak in a language other than English, I don’t italicize it, because I don’t want to give that colonial dominance to English, even though I’m writing in English. Thanks to people like Jenny Han, Jon M. Chu, Awkwafina, Lulu Wang, and Alan Yang, all of these creators, I can write a book where the characters’ race that mirrors my own — because I do think representation is important — and the representation is just baseline.

What do you want readers to take away from Yolk?

I think the takeaway, always, is just talk. It might be that your sibling or any member of your family of origin can be so dysfunctional that expecting a functional answer from them will not serve you in any way whatsoever. But it’s good to find out, and it’s good to remember, and it’s good to tell people around you that that’s the case, so that they can remind you if they need to.

What are you reading right now?

I’m reading Fernanda Melchor’s Hurricane Season. It’s breathless and stunning and horrific and amazing. It just sort of seizes you. I’m also reading The Housekeeper and the Professor by Yoko Ogawa. That’s my bedtime book, because it’s just like people being nice to each other no matter what. It’s the kind of book that allows me to see that it’s safe and that it’s time to go to bed. And I’m reading a lot of scripts, because I’m working on the Permanent Record feature adaptation. It’s super fun.

What's next for you?

Well, I hope to adapt Yolk in some way. I’m also working on an adult novel called Milk Teeth. Shockingly, it’s about mothers and daughters.

If you or someone you know has an eating disorder and needs help, call the National Eating Disorders Association helpline at 1-800-931-2237, text 741741, or chat online with a Helpline volunteer here. If you or someone you know is considering self-harm or experiencing suicidal thoughts, call the National Suicide Prevention Hotline at 1-800-273-8255 or text HOME to the Crisis Text Line at 741741.