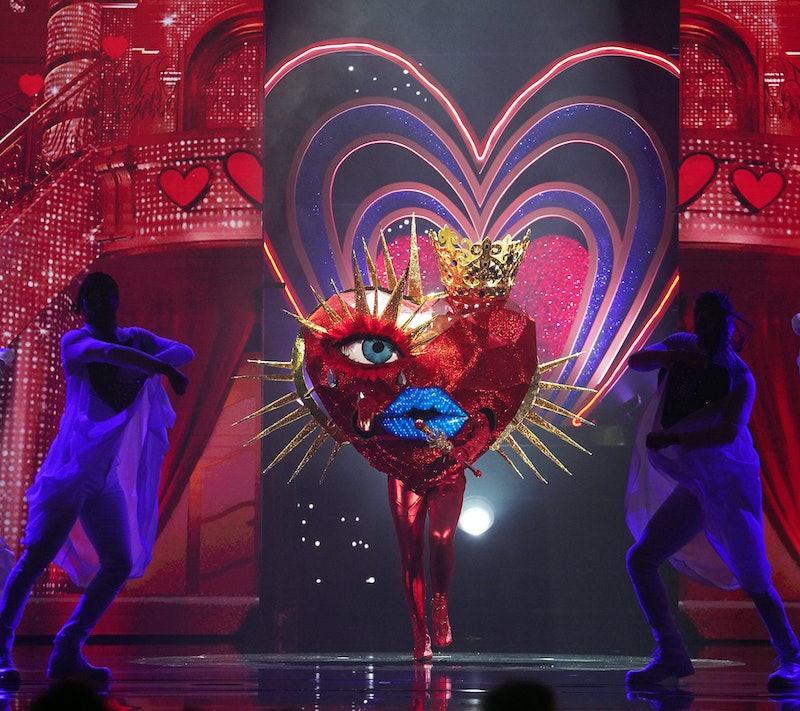 The sixth season of Fox’s The Masked Singer has a new twist. Two groups of costumed contestants — Group A and Group B — will battle it out amongst themselves until only two remain. The last one standing from each group will then compete in a sing-off at the finale. After two premiere episodes featuring only Group A, Group B made its debut on Sept. 29, taking off with a stellar rendition of Lady Gaga’s Born This Way by the Queen of Hearts.

She was joined in the episode by Mallard, Cupcake, Dalmatian, and the musical duo Banana Split. Ultimately, the Dalmatian was eliminated, and rapper Tyga was unmasked. Already, there are multiple theories about each remaining contestant. To get to the bottom of — or, err, under — the mask, here’s a breakdown of everything to know about the Queen of Hearts, including all the clues and the judges’ and fan theories about her.

First, her costume. It’s a one-eyed heart with tears streaking down her ruby red outfit cut akin to the finish of a precious stone. Second, in her clues video, she revealed that she left home when she was “pretty young,” adding, “Growing up, there wasn’t t a lot of warmth in my household.” The following clues involved The Wizard of Oz (the Tin Man handed her a vial of some sort) and a photo of Hilary Swank with the letters “BFF.” Prior to the show, the first teaser clue for the Queen was a horse. When asked why she was dressed as a jumbo heart, she answered in a thick Southern accent, “I just feel like the world’s just so noisy, so I’m here to be a big ol’ blasting, blaring megaphone of heart.”

Former Pussycat Doll Nicole Scherzinger ventured Britney Spears as a guess, saying, “I’m all about freeing Britney right now.” Meanwhile, Jenny McCarthy went the country route saying the contestant’s accent probably meant it was Kelli Pickler, Faith Hill, or Carrie Underwood. She also added a wild card guess: Fergie. The reason? “Those gams are familiar.” As for judge Ken Jeong, he ran with the Wizard of Oz reference, throwing Renée Zellweger in the mix of guesses. She is also from the South, he said.

The audience didn’t seem to agree with the judges’ populations, and the internet is similarly divided. Last season, a special masked character named Cluedle Doo, who later was revealed to be McCarthy’s husband, became the show’s clue giver. This season, it seems like a new costumed persona holds the show’s secrets: Miss Masky. So when the @itsmissmasky Instagram account dropped clues for the Queen of Hearts, Redditors started theorizing.

“Oh hello, your majesty,” begins the Sept. 9 clue. “It must be so fulfilling to live out your alter ego here on The Masked Singer. It’s like the new ‘genesis’ of another new out-of-this-world persona!” The accompanying caption reiterated that the Queen of Hearts is “out of this world.”

Some Redditors took those clues to mean Grimes. Shrewd sleuths noted the Canadian singer not only has a song titled “Genesis” from her 2012 album Visions, but she also serves as a judge on the Fox singing competition Alter Ego. She’s also pretty much out of this world — sartorially and literally since her now-former partner Elon Musk prepares to head to Mars. Oh, and her debut album Geidi Prime’s cover art includes teeny one-eyed hearts.

On Instagram, however, fans couldn’t disagree more. In the comments of The Masked Singer’s Sept. 29 post, fans guessed the performer’s true identity could be Debra Messing, Jessica Simpson, or Kristen Chenoweth, among others.

However, many came to the same conclusion that it’s four-time Grammy winner Jewel. User dottedotstar wrote, “Jewel! No denying that voice,” before she joined others in trying to prove their picks. Her profile definitely seems to fit. Before she shot to fame in 1995 after her debut album Pieces of You came out, she first experienced a rough childhood, People reported. She also covered the Wizard of Oz classic “Somewhere Over the Rainbow,” has an album called Goodbye Alice in Wonderland, and her costume is cut like an actual jewel. Commenters also say Hilary Swank has a dog named Jewel. Coincidence? We think not. Since she’s staying on, more time will lead to more clues. ’Til then, internet, hypothesize!

More like this
Kanye West Apologizes To Kim K "For Any Stress I Have Caused" In Rare Interview
By Jake Viswanath
Jason Derulo Is Launching A New Singing Show In The UK
By Maxine Harrison
20 Years Later, Kelly Clarkson & 'American Idol' Judges Reunite For Her Hollywood Walk Of Fame Star
By Radhika Menon
18 Years After 'American' Idol, Jennifer Hudson & Simon Cowell Reunited On Her Talk Show
By Radhika Menon
Get Even More From Bustle — Sign Up For The Newsletter