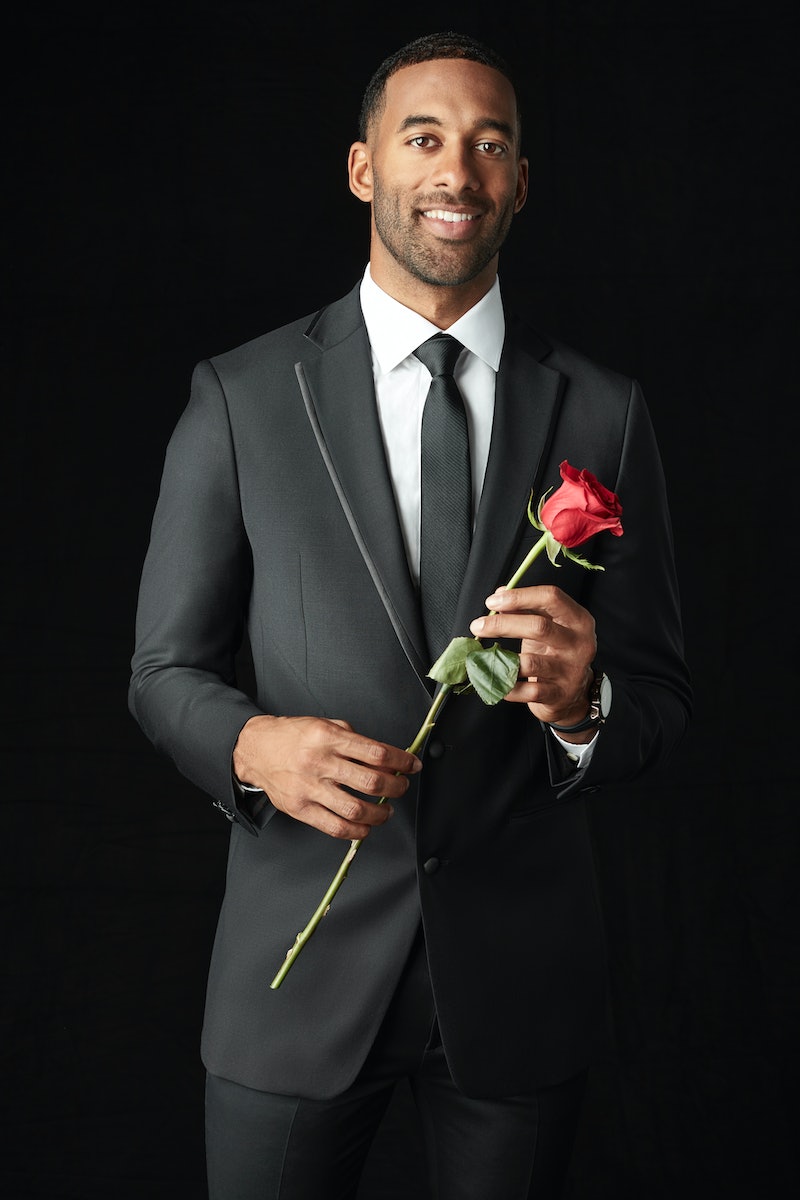 It's too early to tell if Matt James' season of The Bachelor will be dubbed the "most dramatic season ever," but based on the first preview, it's already looking to be the steamiest. A few months ahead of the season premiere on Jan. 4, ABC released the first look at Matt's journey to find love, and the franchise managed to pack a whole lot of make-out sessions and shirtless shots of the Bachelor into a brief, 30-second clip.

Set to Salt-N-Pepa's "Whatta Man," the promo highlights that the franchise's new lead is a "grown ass man," as Tayshia would say. "The women are literally falling for you," host Chris Harrison says after one woman trips up the stairs following her limo exit. However, it seems like Chris' comment is more than just a throwaway joke; the promo shows that the women are clearly smitten by Matt (and his abs), with one contestant calling him a "delicious man."

While the Bachelor clip teases plenty of drama and tears from the women in the house — including a pageant queen who arrives wearing a crown and carrying a scepter — the most shocking moment of the preview comes when Matt admits that he has never been in love before. "My job is to change that," Harrison promises before cutting to a shot of the ABC Food Tours founder kissing one lucky lady in front of a fireworks display.

Harrison isn't the only one who wants to see Matt fall in love for the first time on The Bachelor. His best friend, Tyler Cameron, told the Chicks in the Office podcast that he's hoping Matt will be "in love" when he returns from filming. "Hopefully Matt comes home happy with somebody," the fan-favorite explained before teasing that he recently saw his friend at the Nemacolin Woodlands Resort in Pennsylvania, where they've been filming since September. "We are going to get a full dose of Matt. He's gonna have fun, he's gonna be very vulnerable, he's gonna open himself up."

While Tyler didn't offer up any spoilers about his appearance on Matt's season, it's not surprising that he would want to meet the women competing for his best friend's heart. Back in June, the Bachelorette alum revealed the kind of woman he thinks would be the ideal match for Matt during an appearance on The Bachelor: The Greatest Seasons — Ever! "I think what you're going to look for is someone who kind of resembles his mother," Tyler said. "His mother is one of the sweetest ladies, very loving, caring, compassionate, ready to serve others, help out in the community."

Though fans will have to wait until January to see if any of the women will meet Tyler's criteria, ABC promised that Matt's season of The Bachelor will give them exactly what they've been wanting from the show. "It was so interesting because Matt is not on [Clare's] season of The Bachelorette, and the reason why we take leads from a previous season is because you know them so well and we can predict which person he might like or not, but we just didn't know at all, so it was really fun to watch him interact with everyone," ABC executive Rob Mills told Variety. "And the women were so fantastic. It couldn't have gone better."