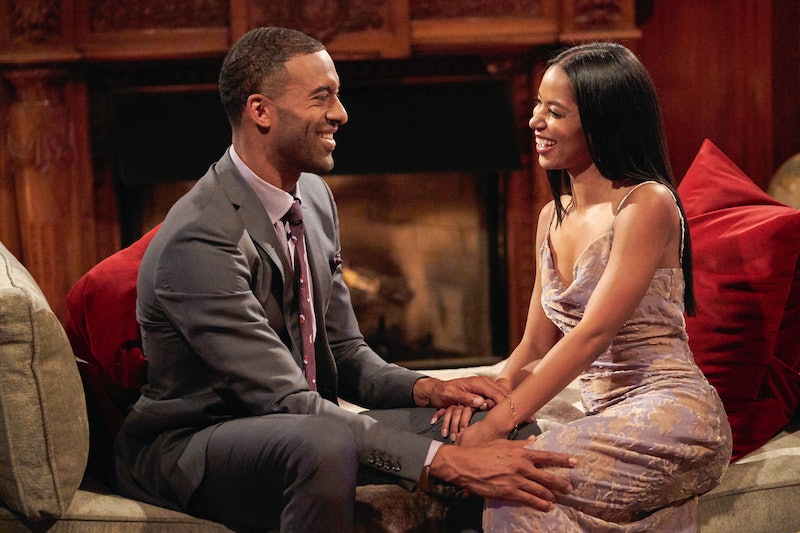 Hometown dates on The Bachelor are famous for their awkward moments — but typically, they don't happen after big declarations of affection. Unfortunately, Matt James' response to Bri admitting she's falling in love with him was so cringey that fans couldn't help but roast the Bachelor for his stilted reaction on social media.

After an emotional conversation with her mother, Bri admitted that she was falling in love with Matt but was "so, so scared" to open up about her feelings with him. Still, she decided that she needed to be vulnerable with her potential future fiancé after they left the date. "[This date] brought a new perspective into this entire journey for me," Bri told Matt, adding, "I feel like I'm falling in love with you. I just want more time with you."

While Bri may have been "so happy" to finally tell the Bachelor how she feels about him, the fans watching at home were decidedly underwhelmed by his reaction to her big declaration of affection. "Thank you for sharing that," Matt said, inspiring a flood of posts on Twitter from viewers who felt that he could have handled that moment a little more smoothly by saying, well, literally anything else.

While Matt's awkward reaction may have been difficult to watch, it's not unusual for the Bachelor to hold back on making any big declarations of love before the final rose ceremony. In fact, when Ben Higgins told both of his finalists — Lauren Bushnell and JoJo Fletcher — that he loved them back in 2017, it was considered a shocking moment in Bachelor history. "We all needed to hear where we stood because I think we all knew it, but it just needed to be said," Ben told Us Weekly at the time, explaining that he didn't regret breaking with franchise tradition. "That was my feelings at the time — it was my feelings in this situation. I don’t regret being honest."

Of course, looking back on it, Bri may not be too heartbroken that Matt didn't return her feelings in the moment. After revealing on the Feb. 15 episode that she had to resign from her job at a major social media company in order to stay on The Bachelor, Bri joked on her Instagram Story the next day that she was "trying to get my job back." Many fans saw her post as a way to throw shade at Matt and as a subtle confirmation that she didn't end up with the final rose. In the meantime, though, there's still a chance for Matt to win back the fans with a more thoughtful declaration of his feelings in the weeks to come.