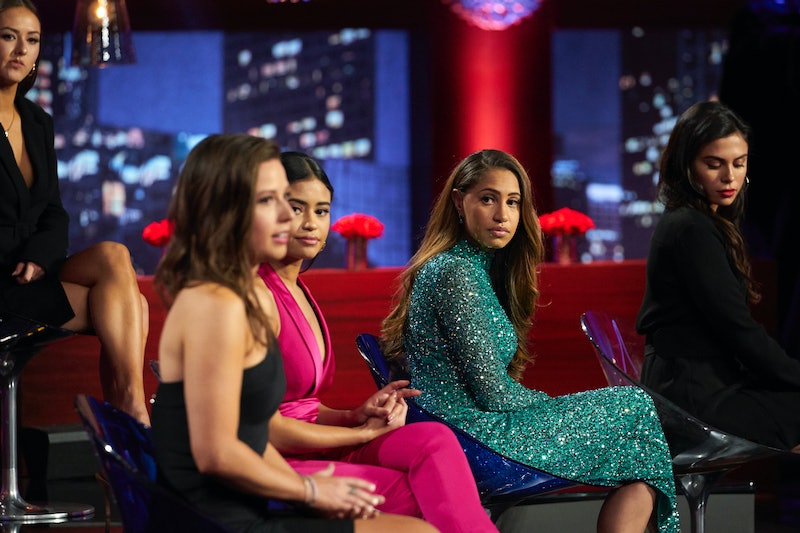 By now, you're probably very, very tired of The Bachelor. So you'd be forgiven for deciding not to tune into Matt's Women Tell All special. On the show, the women rehashed all of the petty fights from the season, including the "toxic" atmosphere in the house and the divide between the "OGs" and the new girls.

"This was a truly wild season with more tears and controversy than ever before," host Chris Harrison — who filmed the special before temporarily "stepping aside" from the franchise — said in what might have been the understatement of the century. "We have an amazing Bachelor and an incredible group of women, so yeah, there's bound to be drama and competition." From there, he dove right into dissecting all of the drama, showing some of "Queen" Victoria's most controversial moments. (And yes, she did indeed show up wearing a tiara.)

While Catalina Morales wasn't there to share her thoughts on that infamous crown snatch, the other women were on hand to dissect all the in-fighting and rude comments that Victoria — and some of the other contestants — instigated during their time on the show. Here are all of the biggest takeaways from the special, in case you just couldn't bring yourself to watch.

Victoria Still Doesn't Think She Did Anything Wrong

Victoria has earned her fair share of criticism over the past few months for her "abrasive" behavior on the show, but when she was asked about why she called Ryan a "hoe," the "queen" was mystified that her fellow contestants were hurt by her comments. "Do you think you're a super sensitive person, though? Because I've been getting ... memes [about me] and I'll laugh it off," Victoria said. "Are you just an emotional person? Even now, with your attitude, it's a lot."

Even after the other women explained that they were there specifically to talk about those comments, Victoria still doubled down. "I guess I'm just a little bit puzzled as to why you're holding on to this emotional anger right now," she told Ryan, before claiming that she was called "way more horrible things on the internet" than what she said to the other women. "I was called a bully on TV," Victoria claimed, to which Ryan fired back, "Well, maybe you were."

Katie’s decision to bring the “toxic” environment in the house to Matt’s attention may have made her a fan favorite, but several of her fellow contestants still think she should have kept it to herself. “The house was not toxic until you made it toxic by bringing it up to Matt,” Chelsea said after Katie defended her decision to tell him. Meanwhile, Serena C. doubled down on her claim that Katie was the “arsonist” of the situation by accusing her of “light[ing] a flame to start a fire” and make everyone else look bad.

The Drama Didn’t End For Brittany When She Returned Home

The Women Tell All special obviously needed to address one of the season’s most controversial moments: the rumor Anna spread about Brittany being an escort and the sex work-shaming it resulted in. Though Anna was ultimately sent home because of her actions — and she apologized for what she said and did on the show — Brittany explained that the whole situation had long-lasting ramifications. “When I first got back, I didn’t even want to be around my family. It was really hard to even text my friends back, the first couple of weeks,” she revealed. "When you Google my name now, the first 20 results are 'The Bachelor contestant Brittany Galvin accused of being an escort.'"

She continued, "There’s nothing wrong with that industry, but it’s not me. … It’s hard. I didn’t sign up to get bullied, I didn’t sign up to get my name slandered. I signed up to meet my person, and this is forever going to be an association with my name. It’s just sh*tty that I’m going to have to constantly defend myself from this." Still, despite all of the hurt that the situation caused her, Brittany made it clear that she doesn’t want people to attack Anna. “What I want people to take away from this is that words can really affect you. I don’t want people to feel bad for me, and I don’t want Anna to get hated on. People make mistakes," she said.

Everyone Wants Abigail To Be The Bachelorette

Ever since Matt gave Abigail the first impression rose, Bachelor fans have wanted to see more of her. During her interview with Harrison, Abigail opened up about the overwhelmingly positive response she's gotten since the season premiere — and the host even read out some excited tweets on stage. "I've been blown away," Abigail said of the support she's received. "I've just gotten so many messages from people saying 'Thank you so much for showing us in a romantic light.' Because disability so often isn't romanticized."

Based on the reaction from social media users, fans are hoping to see Abigail get a love story of her own as the next Bachelorette:

Nobody was expecting Matt to reveal who he gave his final rose to — after all, there are still two more weeks of The Bachelor to go — but it was worth noting how little he shared about his current relationship status while speaking with the women on the show. After Serena P. stated that she hoped Matt "found what [he was] looking for," he offered up a small smile and a one-word response: "Thanks." Is it possible that Matt didn't get the fairy tale ending that he hoped for? Only time will tell — but it's clear that there's still plenty of drama and tears to come.