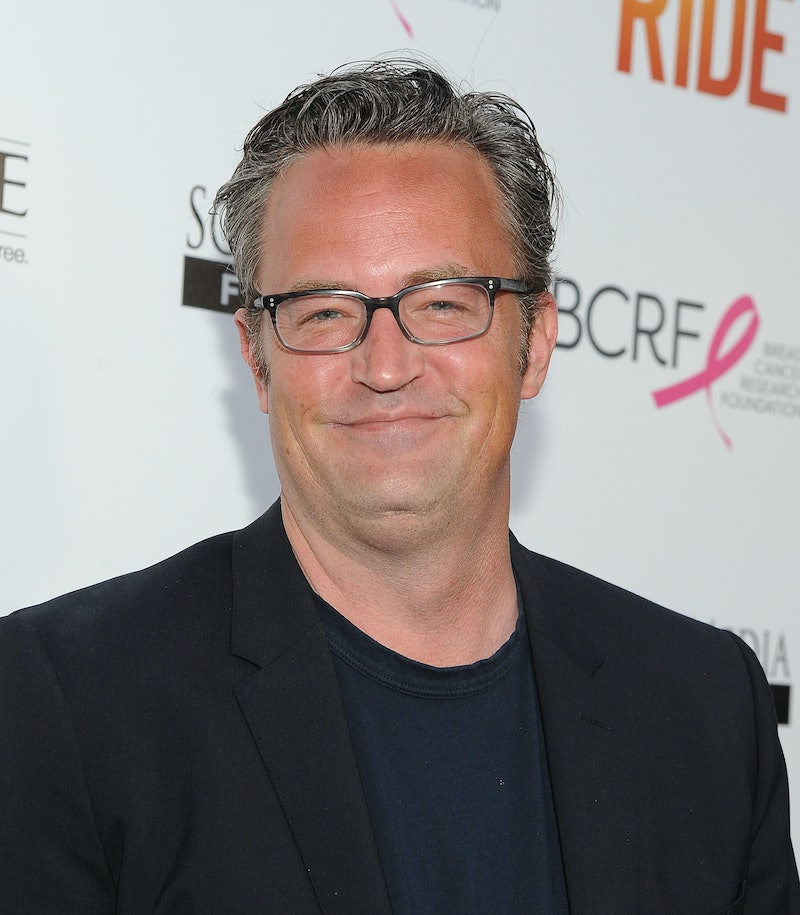 Friends star Matthew Perry is full of good news lately. Just a couple of weeks after confirming that the cast of the hit '90s sitcom will begin filming the Friends reunion early next year, the actor revealed to People on Nov. 26 that he is engaged to his girlfriend of two years, Molly Hurwitz.

"I decided to get engaged," Perry, 51, told the magazine. "Luckily, I happened to be dating the greatest woman on the face of the planet at this time." Per the outlet, the pair first started dating in 2018. And last Valentine's Day, Hurwitz took to her now-private Instagram account to give her followers a glimpse into their relationship.

"Second year being my valentine, but his first as an Instagram influencer," she reportedly wrote, hinting at the actor's Instagram presence after he joined the photo-sharing app a week prior. "HVD to my favorite." According to The Daily Mail, the couple also spent the holidays together last year, which the 29-year-old literary manager posted about on Instagram.

"According to my parents' custody agreement, my mother was not allowed to have a Christmas tree..." she reportedly wrote before confirming their relationship status. "Fortunately, there's no such agreement for a daughter's boyfriend, so Hurwitz gets a treeeeeeee!!!'"

The Friends alum, for his part, has kept his Instagram public but has not commented or shared photos with his now-fiancée since joining the platform. "This is how thrilled I am to finally be on Instagram," Perry captioned his first post on Feb. 7. "So here we go..."

Perry was the last of the six Friends stars to join Instagram, and as soon as he did, former co-stars Jennifer Aniston and Lisa Kudrow came through with their reactions (and their best Friends references). "I'm shocked Matty is the last to join Instagram, considering he was a uh... umm....oh crap 🤦🏼‍♀️ Oh! A computer processing TRANSPONSTER," Aniston wrote alongside a photo of her and Perry. Kudrow matched Aniston's excitement, writing, "Finally! Yay!! Can't believe my eyes. MY EYES."

Obviously, longtime fans of the series have many reasons to keep tabs on the Friends actors' social media accounts. In addition to waiting for Perry's engagement photos to (hopefully) hit his feed, the cast occasionally shares pictures from their casual hangouts. And with the HBO Max reunion special officially in the works, who knows? The cast might let some more details slip on Instagram ahead of its release next year.

More like this
Molly-Mae Hague & Tommy Fury Celebrate Pregnancy Reveal In The Sweetest Way
By Sophie McEvoy and Sam Ramsden
Tyler Perry Makes Rare Comment About Meghan Markle & Prince Harry's Love Life
By Radhika Menon
24 Years Ago, 'Friends' Dropped Its Most Underrated Ross & Rachel Episode
By Grace Wehniainen
Everything To Remember About Lace Morris Before 'Bachelor In Paradise' Season 8
By Grace Wehniainen
Get Even More From Bustle — Sign Up For The Newsletter