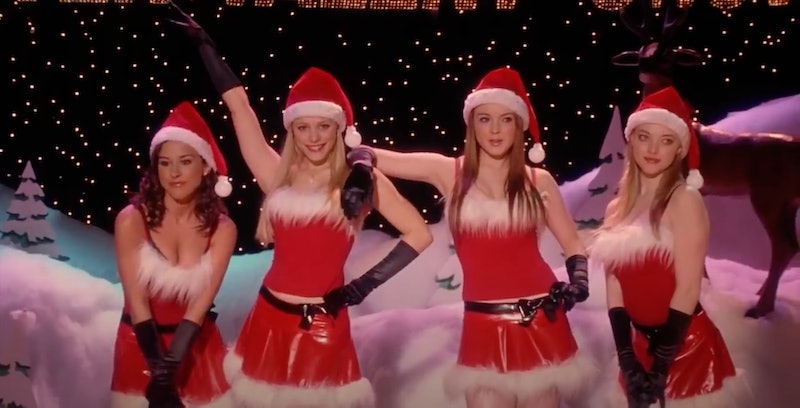 There's nothing that says Christmas like the Plastics' winter talent show performance, which almost became something that Santa Claus wouldn't approve of. The Mean Girls "Jingle Bell Rock" scene was originally racier and much more "naughty" than what fans saw, according to director Mark Waters. In a new interview with Entertainment Weekly, Waters revealed that the Plastics' iconic talent show dance turned out much different than originally planned, thanks in part to Lindsay Lohan herself.

In the interview, published on Monday, Nov. 16, Waters said that Lohan and her costars Rachel McAdams, Amanda Seyfried, and Lacey Chabert were instructed to do a "sexually embarrassing dance move" in the original script. "They were going to turn and stick their posteriors up in the air," Waters told EW. "And then they showed it to me, and I was like, 'Whoa, that’s too much! Go with something else.'"

When he decided the move was too racy, especially for Lohan, who hadn't turned 18 by the time of filming, the infamous "thigh slap" was born during rehearsals. "That's how we got this idea of, 'Let's do this stripper thigh slap simultaneously,' and it just germinated out of the rehearsals organically, which ended up being the funniest part of the scene," he recalled.

As fans may recall, Mean Girls was originally written as an R-rated film, but was edited to a PG-13 level once everyone realized how much it would appeal to teenage audiences. "Regina George cussed like a sailor," Waters told EW in 2014 about the original script. "She had more F-bombs than Joe Pesci in Goodfellas. And I thought, 'This is incredibly bold and daring, but how is anybody going to be able to make this?'" Therefore, it makes sense that scenes like the talent show were edited down.

In addition to Lohan's age, her busy schedule made it difficult for production to choreograph the dance. "It was going to be a much more elaborate dance," Waters said. "Because we couldn't book the time with her, it ended up being a little more roughshod and a little messier than we were intending, but that ended up being the greatest thing. We're actually able to do this for real and have it feel messy like it should [for high school teens]. That worked for the movie."

If the writers and producers had their way though, not only would the choreography been different, but so would the song. It turns out that "Jingle Bell Rock" wasn't their first choice for the Plastics' routine — or even second, or third. "You’d be surprised how hard it is to license Christmas songs," he said. "I don’t even know how many things we tried before we got the rights to 'Jingle Bell Rock.' We were just happy to have anybody say yes." A true Hollywood Christmas miracle.