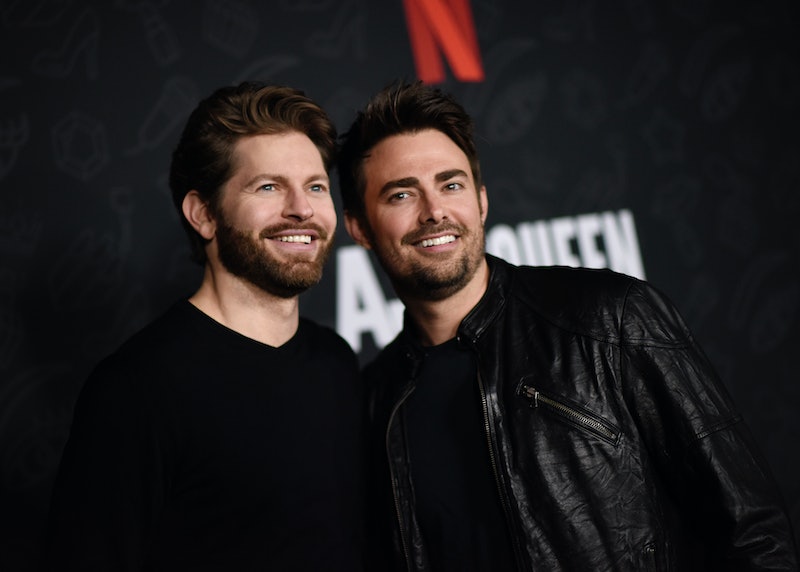 Bad news, Mean Girls fans — Aaron Samuels is officially off the market. According to People, Jonathan Bennett, who played the North Shore High School jock in the 2004 cult classic, got engaged to his boyfriend Jaymes Vaughan over Thanksgiving weekend. And not only was the proposal a total surprise, but it also included an original song written and performed by his now-fiancé.

"He wrote me a song!" Bennett said before revealing more details about the secret proposal and the moment he started putting it together in his head. "I was told we were going to be taking family Christmas card photos…but then no one would look me in the eye and I was like what is going on? I later found it out it was because they didn't want to spoil what was about to happen."

Bennett's sister played a crucial role in the surprise. "My sister shouted for me to come outside 'real quick' and my FOMO kicked in so I ran outside," he told the magazine. "Then I looked over and saw Jaymes holding a sign that said, 'we never did find our song, so I wrote it for you,' and that's when I knew was getting proposed to."

In addition to the photos the pair shared with People, the couple also gave the outlet an exclusive look at their engagement rings. Per the magazine, Vaughan presented Bennett with a custom platinum ring from Kay Jewelers, adding that the company has been "very supportive of the LGBTQ+ community." "I told [Kay Jewelers] I had an idea to create something not only for our special moment, but something other LGBTQ+ couples might be inspired by for their rings too," he said.

According to Vaughan, both he and Bennett have the same ring, and they're even more symbolic than people might realize. "The diamonds face out so the world sees them," he said, explaining that when they get married, they plan to "flip the rings so the diamonds face us." "My reasoning for that is like I told Jonathan: 'The diamonds face us then because my world is exponentially more beautiful now that you are in it forever,'" he said.

For his part, Bennett seems excited about this next chapter. While the Christmas House actor didn't address the engagement directly, he did share a caption on Instagram yesterday, Nov. 29, about how thankful he is for everything going on in his life right now. "I'm thankful for all the blessings I've had in my life," he wrote, adding that he's especially thankful for his health and the health of his family. "Thank you for always supporting me and letting me be a part of your life and in turn being a part of mine."

More like this
Rachel Zegler Reveals She Had Breast Cancer Scare
By Radhika Menon
Tyler Perry Makes Rare Comment About Meghan Markle & Prince Harry's Love Life
By Radhika Menon
Bachelorette Gabby Kissed Her New Fiancé On 'Dancing With The Stars'
By Jake Viswanath
Where Is Former Bachelor Host Chris Harrison Now & What Is His Net Worth?
By Hugh McIntyre
Get Even More From Bustle — Sign Up For The Newsletter