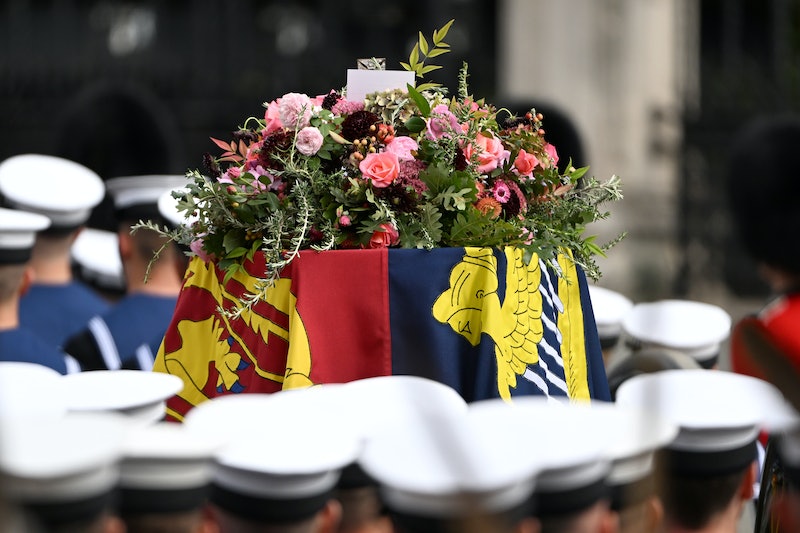 After lying in state for six days at Westminster Hall, Queen Elizabeth II’s coffin began its journey to its final resting place in Windsor adorned with a beautiful wreath of flowers and foliage. Sat atop the coffin, and placed beside the Imperial State Crown, the Sovereign’s Orb, and Sceptre with Cross, the arrangement was overseen by King Charles III, who ensured the blooms paid tribute in the most poignant way.

The bouquet featured flowers picked from royal gardens, including Buckingham Palace, Clarence House, and Highgrove House. At King Charles III’s request, “the wreath contains foliage of Rosemary, English Oak and Myrtle.” Each flower carried deeper meaning, as Buckingham Palace notes, with “Rosemary for remembrance; Myrtle, the ancient symbol of a happy marriage, and cut from a plant that was grown from a sprig of myrtle in her Late Majesty’s wedding bouquet in 1947; And England oak, which symbolises the strength of love.”

Other flowers within the wreath included “scented pelargoniums; garden roses; autumnal hydrangea; sedum; dahlias; and scabious, all in shades of gold, pink and deep burgundy, with touches of white to reflect the Royal Standard.”

The wreath was made with sustainable materials at the additional request of the King, “in a nest of England moss and oak branches.” A letter affixed to the middle of the wreath is believed to have read: “In loving and devoted memory. Charles R.”

Having visited the Chelsea Flower Show numerous times during her reign, the Queen once said that while she wasn’t the best gardener, “plants, trees and flowers have been a source of pleasure” in her life. Roses were a particular love of the late monarch, but her favourite flower was Lily of the Valley, according to Blooming Haus, which took precedent in her coronation bouquet in 1953.

Beyond the sentimental meaning behind the blooms, the wreath made headlines for very different reasons, too. When the BBC’s cameras zoomed into the floral display and King Charles’s touching note, eagle-eyed viewers spotted a rather large spider. The cameo did not go unnoticed on Twitter.