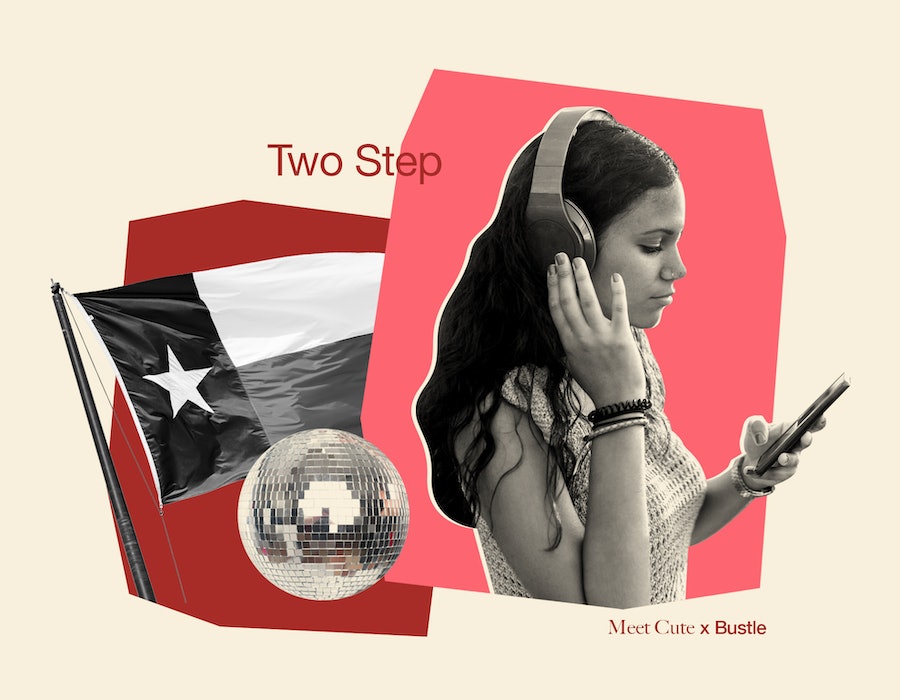 Few entertainment genres are as intrinsic to Bustle's identity as the rom com. This year, in the week leading up to Valentine's Day, Bustle is partnering with the podcast Meet Cute, which creates original 15-minute audio rom coms, to explore real-life love stories. Today's episode, "Two Step," is based on the actual meet cute between Brenda and Jamie Willis, who have never agreed on how they got together almost 20 years ago.

"Our stories differed a week later. This didn't just happen," says Jamie Willis, joining a Zoom with his now wife, Brenda; Anna Thorup, who wrote the Meet Cute based on their story; and Bustle.

For Thorup, the Willises' conflicting memories were the draw. "The idea of a couple having differing ideas of how they met felt like such a unique concept to try to translate," she says. When she interviewed the them, it just got more fun. "They were both so dynamic and funny and both had such enthusiastic versions. As I was listening, they kept jumping in [with] 'That's not what happened.'"

The interrupting helped Thorup land on the structure of the episode: she would kick off the Meet Cute with the characters, Jason and Ellen, in the present, telling their story to friends — or trying to.

In life, Brenda and Jamie agree that they first met at Cowboys dancehall in Dallas, a frequent haunt for both of them. "We must have been there 50 times at the same time without crossing paths," Jamie says. She was 22 and he was 32. He usually didn't dance, whereas Brenda was in the habit of asking 10 guys a night to dance.

They disagree — strongly — on whether Brenda approached Jamie or one of his friends to dance, but they did dance, and had a good time.

Never one to adhere to the be-cool-wait-three-days rule, Jamie called her that night to say he'd enjoyed dancing with her and ask her for another date on Sunday. She said yes. What Jamie didn't realize until midday Saturday was that he had made a second phone call. He went out again Friday night and called Brenda at 3 a.m. Saturday morning, very drunk, to say again how much he liked her.

Brenda wasn't impressed. "I worked. I had three jobs," Brenda recalls. "That last call when he was wasted, it was a little weird."

"It was a lot weird," Jamie says. "I woke up that Saturday and played golf and didn't remember until Saturday afternoon [that I'd called her drunk the night before], so I called again Saturday afternoon." He apologized, and Brenda, who ultimately submitted their story to Meet Cute, agreed to keep their date on Sunday.

They each showed up early to scope out the other, since at this point neither of them remembered what the other looked like, and ended up walking in at the same time. "So we got punctuality in common," Jamie says. They talked for six hours that day. In 2007, they got married.

Before today, the Willises hadn't listened to their Meet Cute. "We know it's probably not going to be exactly what happened," Brenda says, but she's not worried. Jamie adds, "It's exciting to have someone say, 'Tell your story.'"

Meet Cute is looking for more real-life love stories to turn into feel-good rom coms! You can send them the story of how you and your partner met here, or DM them on Twitter (@listenmeetcute) or Instagram (@meetcute)!

More like this
20 Women Reveal Exactly How Long It Took Them To Get Over Their Ex
By Amanda Chatel and Lexi Inks
Who Is Nick Cannon Dating & How Many Kids Does He Have?
By Jordyn Tilchen and Radhika Menon
You Can “Fall In Love” At The Resort Where Bachelor In Paradise Season 8 Was Filmed
By Brad Witter
The 'Bachelor In Paradise' Schedule Shifts To 4 Hours Every Week After The Season 8 Premiere
By Brad Witter
Get Even More From Bustle — Sign Up For The Newsletter