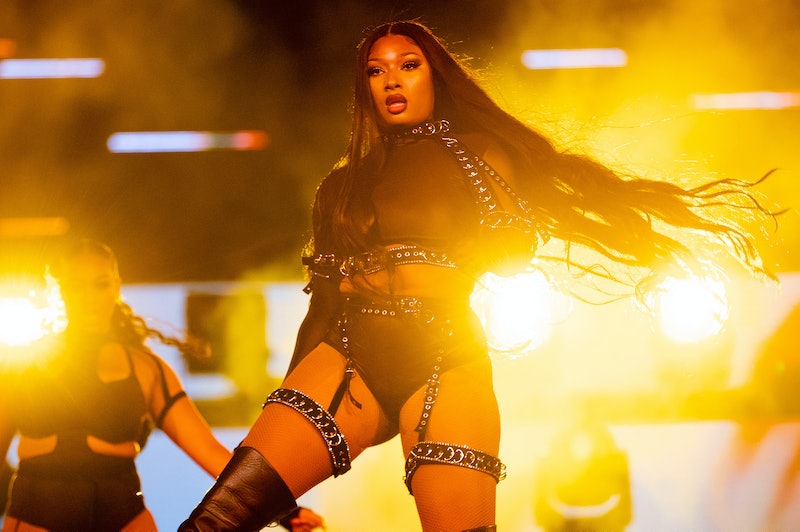 Finally, something exciting to look forward to in 2020. Megan Thee Stallion announced that her debut album, Good News, will finally be released on Friday, Nov. 20. The rapper's self-proclaimed Hotties have been waiting literal years for it to drop, as she became embroiled in a legal battle with her first record label 1501 Certified Entertainment, who Megan claimed was blocking her from releasing new music. In the meantime, she resorted to putting out mixtapes like Fever and Suga, but there's nothing more exciting than a bonafide album from one of the most exciting rappers in the game. Now that the album is coming much quicker than fans anticipated, we've compiled everything you need to know about Good News before you can finally listen to it.

Megan announced the news on Wednesday, Nov. 12, explaining that the title of her album was inspired by her own experiences in 2020 as well as everything the world has been through. "THROUGH SUCH A ROUGH YEAR I FELT LIKE WE COULD ALL USE A LIL GOOD NEWS," she wrote on Twitter. "MY OFFICIAL ALBUM “GOOD NEWS” DROPS NOV 20TH!" The rapper also unveiled her striking album cover, which shows her in a giant display box surrounded by positive headlines about her.

Days before the album is set to drop, Megan generated even more excitement when she announced the tracklist, which features her latest single with Young Thug, "Don't Stop." Fans of the viral "Savage" remix featuring Beyoncé will be delighted to know it made its way onto the album as well. The rapper also revealed that there will be additional collaborations on the album — SZA, City Girls, and Big Sean are just a few of the other artists who joined Megan for her official debut.

Good News comes after a tumultuous year of highs and lows for the rapidly rising artist, which included the battle with her record label over control of her music, collaborations with Beyoncé and Cardi B that went number one on the Billboard Hot 100, and a July incident in which she was allegedly shot in the foot by rapper Tory Lanez (Lanez maintains that he did not shoot Megan and has since been charged with one count of assault and one count of carrying a loaded and concealed firearm).

Although Megan hasn't confirmed whether she'll address these incidents on her new album, she has been open about the pain and trauma she's suffered. In a new interview with GQ, Megan recalled the shooting and said it reflected how Black women everywhere are treated — expected to be strong but neglected when they're put in danger. “I have to be tough through all this? All the time?," she said. "It was like, who really checks on us or who protected us? You just go your whole life with that mentality. And then when something actually happens to you, when you properly should have protected yourself, your first instinct was not to protect yourself, it was protecting other people." In that same interview, Megan also alleged Lanez offered her money for her silence, which his lawyer denied.

Whether she addresses the many headlines written about her this year or chooses to provide a fun escape for fans and herself, Megan's debut album is sure to be an absolute must-listen.

More like this
Everything To Know About Taylor Swift’s 10th Studio Album, 'Midnights'
By Grace Wehniainen and Jake Viswanath
Mariah Carey Is Releasing Her “Lost” '90s Grunge Album
By El Hunt
The Spice Girls Just Dropped A Brand New Music Video
By Sam Ramsden
Jason Derulo Is Launching A New Singing Show In The UK
By Maxine Harrison
Get Even More From Bustle — Sign Up For The Newsletter

This article was originally published on November 16, 2020