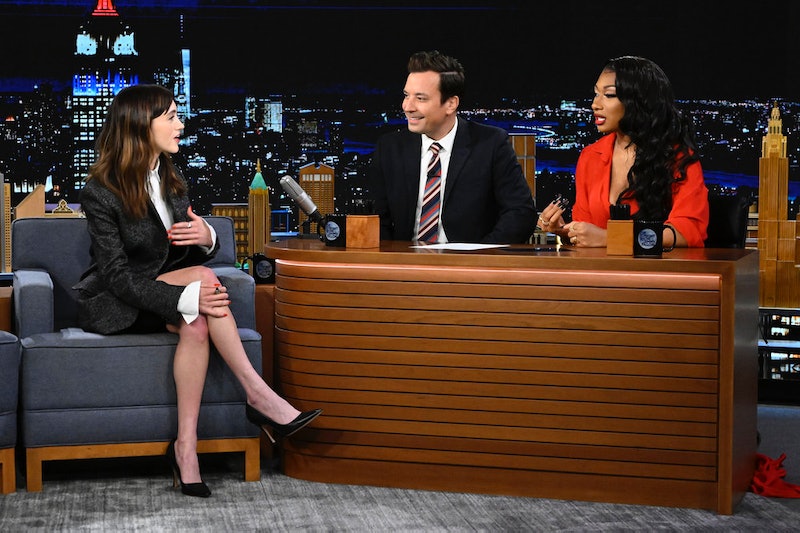 No, you’re not in the Upside Down: Megan Thee Stallion really has beef with Nancy Wheeler from Stranger Things. While co-hosting NBC’s The Tonight Show Starring Jimmy Fallon on Aug. 11, the “Savage” rapper finally got the opportunity call out actor Natalia Dyer, who plays Nancy in the Netflix series, for her character’s long-running love triangle with Steve Harrington (Joe Keery) and Jonathan Byers (Charlie Heaton).

Meg certainly made clear where she stood on the “Team Jancy” versus “Team Stancy” debate. “I want Steve,” she declared, before beginning her lighthearted interrogation. “Let’s talk about it, though. OK, so boom. At first, you liked Steve. You were into Steve, and then you just kind of, like, dumped him. No caution, he didn’t know what was happening. Poor Steve,” the three-time Grammy winner recapped.

“Y’all keep throwing the kids on him to babysit,” Meg continued. “He keeps saving y’all life. All he do is save y’all life. He was beating everybody up, and you’re like, ‘Oh man, I’m going to Jonathan. Sorry.’”

Dyer, for her part, didn’t necessarily disagree, responding with a laugh: “I do feel bad. Honestly, I just think the way Jonathan and Nancy happened, I was like, she doesn’t always make the most morally right decisions all the time. But that’s human.”

After dubbing Nancy a “hot girl,” Meg even tried to get the Tonight Show guest to fess up to the “juicy part” of what Nancy was “really giving” by flirting with Steve throughout Stranger Things 4. Teasing that her character has “options” moving forward, Dyer suggested that Nancy “probably just needs a little ‘me’ time” after the death-defying events that unfolded in the most recent season. “Maybe a little therapy even,” she said, adding, “They’re still in high school; it’s pretty intense.”

Having been given “so much to think about,” Meg — who also hilariously advocated for the return of Shannon Purser’s Barb — wrapped up her argument with a pointed statement about Nancy’s romantic choices. “Jonathan is boring. She’s so smart, she’s so pretty. She’s got things to do. Yes, we love Nancy.”

The Stranger Things cast, or at least one of them in particular, seem to return the rapper’s love. In Season 4 of the supernatural Netflix series, Sadie Sink’s Max Mayfield escaped Vecna’s curse by listening to her favorite song, Kate Bush’s “Running Up That Hill.” As viewers widely debated which song would save them, even actor Noah Schnapp, who plays Will Byers, weighed in with a nod to Meg and Cardi B. “If I ever get cursed by vecna just play WAP on my AirPods and I’ll be out of that trance in no time,” Schnapp tweeted on May 30.

Backstage at Fallon, Meg proved it was all love by introducing Dyer to “some real life demogorgons,” aka her French bulldogs, 4oe and Oneita, as she shared on Twitter afterward.

More like this
Caleb McLaughlin Details Racism From 'Stranger Things' Fans
By Radhika Menon
Rhys Ifans Has A Good Reason For Keeping His Love Life On The DL
By Maxine Harrison
'House Of The Dragon’s Theo Nate Is A “Massive” 'GoT' Fan
By Maxine Harrison
The ‘Emily In Paris’ Season 3 Release Date Is Here, Plus The First Footage
By Bustle Staff
Get Even More From Bustle — Sign Up For The Newsletter