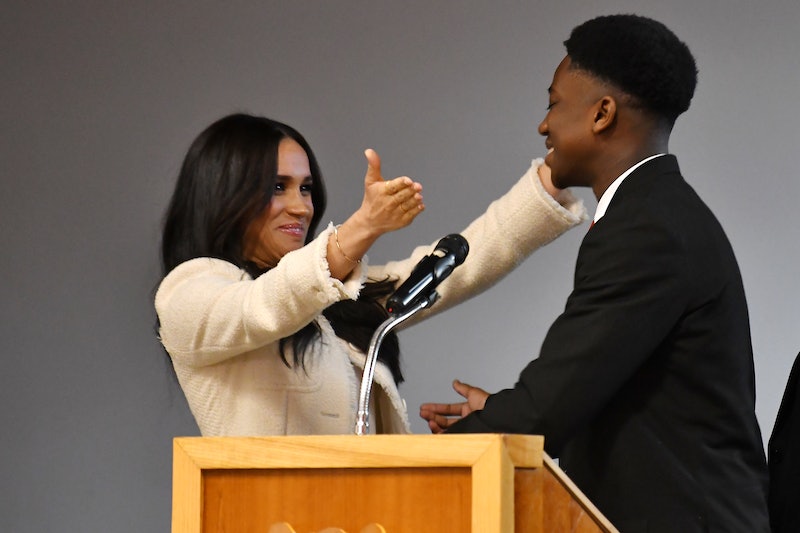 Meghan Markle has been in the press consistently for the past week following her groundbreaking interview with Oprah in the U.S. And while many are still talking about the conversation and what it revealed, today a more heartwarming story emerged about Meghan Markle writing a letter to the school she visited in Dagenham, London, last year.

Markle wrote the letter to Robert Clack School in Dagenham to mark one year since her visit on International Women’s Day 2020 and to recognise the 50th anniversary of equal pay legislation in the UK.

In her letter, Markle shared her fond memories of the day, commenting on how much it meant to her.

“It was this time a year ago that I had the pleasure of meeting so many of you,” she began, adding later: “I look back on that day with such fond memories, and think of you all frequently, especially recognising how difficult it's been for students and families during the past year.”

She also touched upon her meeting with Geraldine Dear, a former machinist at the nearby Ford factory, where the equal pay battle initially began, which ultimately led to a change in legislation (the creation of the Equal Pay Act 1970).

“I've spent time recently thinking about Geraldine Dear, who joined us last year and is such an inspiration to all of us,” the Duchess wrote. “Without women like Geraldine, who formed part of the original group of women advocating for equal pay, so much of what we do now wouldn't be possible.”

But perhaps what we all remember most about Meghan’s visit to Robert Clack School was schoolboy Aker Okoye, who called Markle beautiful in front of a huge crowd of peers. The moment went viral, and clearly made an impact on Meghan, as she referenced it in her letter:

“I don't think we'll ever forget when I asked that young man — Aker — to come on stage to share what International Women's Day means to him and how he honours the women and girls in his life. He had a few thoughts that had us all laughing!”

Markle finished by sweetly informing the pupils and staff that she still has the Debate Society team jacket she was given on the day, and “wear[s] it often,” in California. “Thank you again for thinking of me,” she finished.

More like this
10 Photos Of William, Harry, & Their Cousins Honoring The Queen Together
By Stephanie Topacio Long
William & Kate Shared How Their Kids Are Doing As They Mourn The Queen
By Stephanie Topacio Long
Oprah Winfrey Revealed Her Hopes For Prince Harry & The Royal Family
By Maxine Harrison
King Charles Ensured These Subtle Tributes Were Included In Queen Elizabeth’s Funeral Wreath
By Sophie McEvoy
Get The Very Best Of Bustle/UK