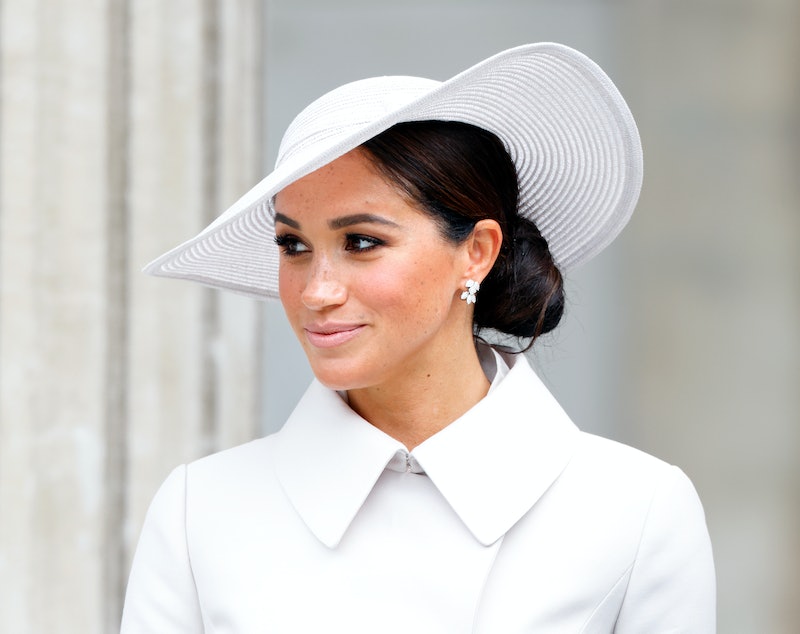 During her time in the Royal Family, Meghan Markle put a lot of thought into everything she did — even down to her wardrobe. In the third episode of the new Netflix docuseries Harry & Meghan, which premiered on Dec. 8, the Duchess of Sussex revealed that when she was living in the UK, she wore a lot of muted tones so she wouldn’t stand out. “Most of the time that I was in the UK, I rarely wore color,” she revealed. “There was thought in that.”

As Meghan is seen trying on a coral-colored gown for a New York gala, she explains in interview footage that she didn’t wear bold colors while working for the Royal Family because she wanted to avoid accidentally clashing with Queen Elizabeth II and other relatives. “To my understanding, you can’t ever wear the same color as Her Majesty if there’s a group event, but then you also shouldn’t be wearing the same color as one of the other more senior members of the family,” she said. “I was like, ‘Well, what’s a color that they will probably never wear? Camel, beige, white.’”

However, Meghan was also weary of standing out within the Royal Family in general. “It also was just to blend in. I'm not trying to stand out here. There’s no version of me joining this family and trying not to do everything I could to fit in,” she said. “I don’t want to embarrass the family.”

Despite her intentions, Meghan has still received some criticism from the British press for wearing white, even after she left the UK. The day before Harry & Meghan premiered, the Daily Mail published headlines asking why she chose to wear the “utterly impractical” color over the years. “This woman has two toddlers, right?” they wrote. “Dogs. Chickens. She must be ‘against’ dry cleaning, given it’s probably ever so bad for dolphins. And surely she’s not getting married again? So why on earth does Meghan wear top-to-toe white, like, all the time?”

Nowadays, when she wears white, Meghan seems to convey a deeper political message. In July 2020, she wore an all white-ensemble to give a commencement speech to her alma mater, The Immaculate Heart High School, where she spoke on George Floyd and the Black Lives Matter movement for the first time and donned a white button-up shirt while leading a discussion on BLM for the Queen’s Commonwealth Trust. Given how white has been worn throughout history to represent various human rights causes, it seems that the shade has taken on new meanings for Meghan.

More like this
Brittany Snow Files For Divorce From Tyler Stanaland After 'Selling The OC' Drama
By Grace Wehniainen and Radhika Menon
Everything To Know About 'The Real Housewives Ultimate Girls Trip' Season 4
By Jake Viswanath
Andy Cohen Apologized To Larsa Pippen After A 'RHOM' Season 5 Reunion Dust-Up
By Brad Witter
'Bling Empire: New York’ Star Tina Leung Has A Superhero Alter-Ego
By Alyssa Lapid
Get Even More From Bustle — Sign Up For The Newsletter
From hair trends to relationship advice, our daily newsletter has everything you need to sound like a person who’s on TikTok, even if you aren’t.