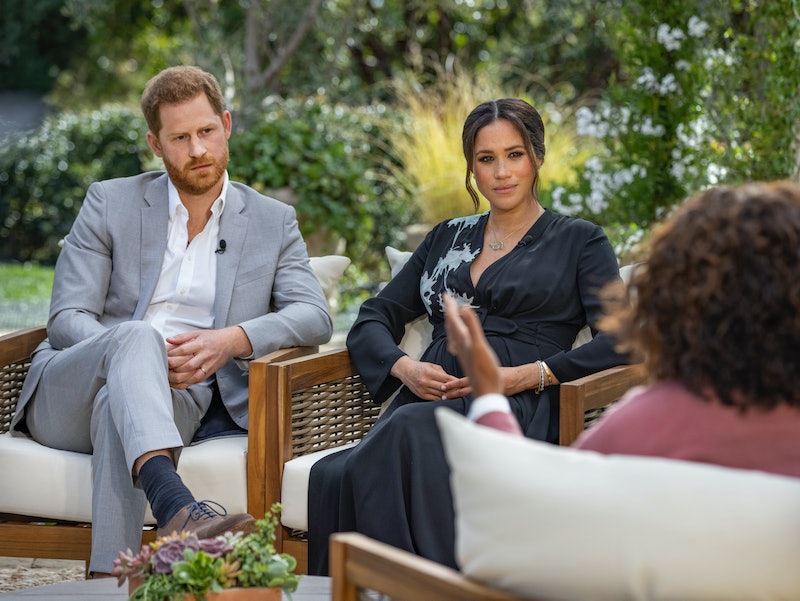 With each day leading up to Meghan Markle and Prince Harry's tell-all with Oprah Winfrey, the more highly anticipated it becomes. Amid Buckingham Palace's investigation into bullying accusations made against the Duchess in The Times, a new Oprah teaser shows Meghan opening up about her decision to speak out. The clip revealed that Winfrey first approached them about an interview prior to the couple's May 2018 wedding. “I called you either or February or March 2018 before the wedding asking, ‘Would you please get me an interview,’ and you said, ‘I’m sorry, it’s not the right time,’” the host recalled.

“Well, I remember that conversation very well. I wasn’t even allowed to have the conversation with you personally, right?” Markle replied. “There had to be people from the [communications team] sitting there.” Winfrey agreed, adding, “There were other people in the room when I was having that conversation. You turned me down nicely and said, ‘Perhaps there will be another time, when there’s the right time.’ What is right about this time?”

Markle paused to give her answer some thought before offering, “Well, so many things. That we’re on the other side of a lot of, a lot of life experience that’s happened. And also that we have the ability to make our own choices in a way that I couldn’t have said yes to you then, that wasn’t my choice to make.”

The Duchess then went on to recount what it was like to go from a 30-something actress with free rein of her life in America to a member of Britain's royal family. “As an adult who lived a really independent life to then go into this construct that is, um, different than I think what people imagine it to be,” Markle explained. “It’s really liberating to be able to have the right and the privilege in some ways to be able to say, 'Yes ... I'm ready to talk' ... to be able to just make a choice on your own and just to be able to speak for yourself.”

This latest preview follows two previous teasers of the Oprah interview. In one, Markle speaks about the ongoing role Buckingham Palace plays in her public tabloid turmoil. “I don’t know how they could expect that after all of this time we would still just be silent if there is an active role that The Firm is playing in perpetuating falsehoods about us,” she told Winfrey. In another, Prince Harry references his late mother, Princess Diana: “My biggest concern was history repeating itself.”

The conversation with Oprah has stoked controversy before it has even aired. Earlier this week, Buckingham Palace released a statement vowing to “investigate” bullying claims made by a former royal aide against Meghan. The couple's rep has denied the claims, calling them a “calculated smear campaign” strategically published just before Meghan and Harry “are due to speak openly and honestly about their experience of recent years.”

Several of those close to Meghan have spoken out on her behalf, including her Suits co-star Patrick J. Adams. In a long series of tweets on March 5, Adams wrote about his admiration for Meghan and criticism of the royal family. "Meghan Markle and I spent the better part of a decade working together on Suits. From day one she was an enthusiastic, kind, cooperative, giving, joyful and supportive member of our television family," Adams wrote. "She remained that person and colleague as fame, prestige and power accrued." He concluded his comments by encouraging Buckingham Palace to, "Find someone else to admonish, berate and torment. My friend Meghan is way out of your league."

More like this
Tyler Perry Makes Rare Comment About Meghan Markle & Prince Harry's Love Life
By Radhika Menon
King Charles Ensured These Subtle Tributes Were Included In Queen Elizabeth’s Funeral Wreath
By Sophie McEvoy
Camilla Paid Tribute To The Queen In A Heartfelt Video Message
By El Hunt and Sam Ramsden
Will Archie & Lilibet Attend The Queen's Funeral?
By Sam Ramsden
Get Even More From Bustle — Sign Up For The Newsletter