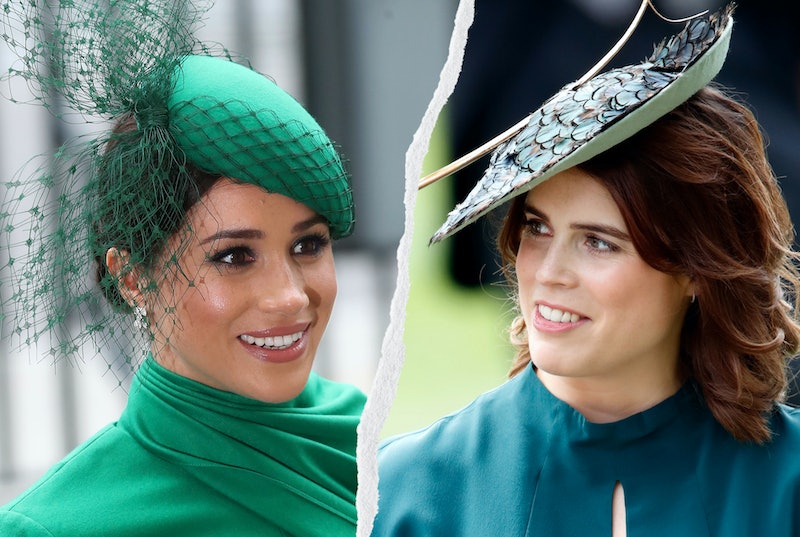 While the Sussexes appear to be estranged from most of the royal family, Meghan Markle is reportedly still close with Princess Eugenie, having maintained a relationship throughout the Royal Exit. Meghan and Eugenie have "stayed friends and remain friends," according to an anonymous royal insider, Us Weekly reported in February.

Princess Eugenie, who welcomed her first son August last month, reportedly connected with the Duchess of Sussex over pregnancy and motherhood. "They are sort of an unlikely pair, but remain in contact," an anonymous source said. "They bond over their pregnancies."

Meghan and Prince Harry's March 7 interview with Oprah Winfrey revealed ongoing tensions between the couple and members of the royal family. In particular, Harry offered a glimpse into his estrangement from his father, Prince Charles, and brother, Prince William. Prince Harry claimed that Prince Charles "stopped taking his calls" amid conversations about stepping back from royal responsibilities. The Duke of Sussex also said that while he had love and respect for Prince William the two "are on different paths" and added that "the relationship is 'space' at the moment."

"Eugenie is really the only member of the royal family that Meghan is still close to," the source told Us Weekly. Ahead of Markle and Harry's wedding, Eugenie even moved next door to the couple at Kensington Palace in London. The two couples lived in Ivy Cottage and Nottingham Cottage, respectively.

Markle and Eugenie's bond may not be a total surprise to fans of the royal family. Finding Freedom, the Sussex biography written by Omid Scobie and Carolyn Durand, revealed Harry and Eugenie have been close pals since childhood. "Out of all the Queen’s grandchildren, Harry and Eugenie have one of the most natural connections," the biography explained. "Like Harry, Eugenie is loyal, honest, and great fun. The two had many nights out together in London."

Now adults, Eugenie and her husband Jack Brooksbank have found themselves at similar stages in their lives as Meghan and Harry. Eugenie and Brooksbank tied the knot in October of 2018, just a few months after the Sussexes. On Feb. 9 of this year, Eugenie gave birth to her first son at the Portland hospital, where Meghan and Prince Harry delivered Archie. Days later, Meghan and Harry announced they were expecting a second child, a daughter due later this summer.

Years before these weddings and births, the pairs reportedly went on double dates in London. And Eugenie and Jack once visited Meghan and Harry in Toronto in 2016 while Meghan was filming Suits, according to PopSugar, and while there, the four of them partied at a club for Halloween.