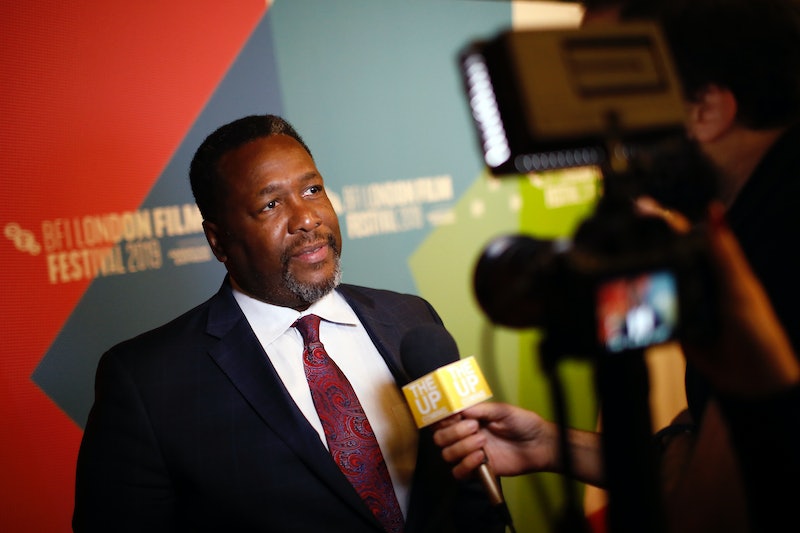 Meghan Markle and Prince Harry’s bombshell interview with Oprah Winfrey has no doubt polarized the world, even among her beloved Suits co-stars. But now, Meghan’s TV father on Suits, Wendell Pierce, says his initial criticism of that interview was “twisted” by tabloids and not meant as a statement of hatred. After appearing on the UK’s LBC radio station earlier this week, at which time he said the buzz surrounding the couple’s interview felt “insignificant” in light of the ongoing COVID-19 pandemic, he has now clarified what he actually meant.

“Today 3,000 people are going to die in America from COVID,” he said on March 9. “A couple of hundred people are going to die within this hour in the UK.” According to BuzzFeed, Pierce went on to compare the interview to an English expression, “Full of sound and fury, signifying nothing,” written by the one and only Shakespeare. “It is quite insensitive and offensive that we are all complicit in this sort of palace gossip,” he said. “In the midst of so much death, I think it is insignificant.”

Pierce’s comments drew backlash from fans and tabloids alike, given the seriousness of Harry and Meghan’s comments on Buckingham Palace. During the interview, Meghan admitted that she “didn’t want to be alive anymore” after the palace failed to protect her against false and often racist tabloid rumors, leading to her and Prince Harry’s royal exit in January 2020.

In a separate interview with Entertainment Tonight, Pierce claimed that his words and intent were “twisted” by tabloids, clarifying that he hadn’t seen the interview and did not mean to dismiss Meghan’s struggles. “My point was we are all complicit in this whirlwind of royal obsession that feeds the tabloids while so much death is around us,” he said. “I would never demean a person's mental health. My words were twisted. A classic tabloid trick.”

In a string of tweets, Pierce added that he reached out to Meghan and continues to give her his support. “Predicting this hellacious maelstrom I also told her she would always have a friend in me,” he wrote. “Because I had no interest in the interview doesn't change that.”

Pierce is not the first Suits star to speak out about the groundbreaking interview. Patrick J. Adams also wrote a Twitter thread to defend Meghan, calling his former co-star a “powerful woman with a deep sense of morality” and attacking “endless racist, slanderous, clickbaiting vitriol” written about her in British tabloids. “I also knew that Meghan was stronger than people realized or understood and they would regret underestimating her,” he wrote. “Find someone else to admonish, berate and torment. My friend Meghan is way out of your league.” Meghan has also received support from the likes of Beyoncé and close friend Serena Williams.

Meghan’s real-life dad, however, is another story entirely. In a March 8 appearance on Good Morning Britain, Thomas Markle called his daughter’s interview “over-the-top” and “disappointing.” He also defended the royal family against accusations that there was “several conversations” about the skin color of Harry and Meghan’s son Archie, saying he doesn’t “think the British family are racist at all.” Meghan’s relationship with her father has been tumultuous, to say the least, with Thomas frequently speaking to the press against her wishes. “When they decide to talk to me, I’ll stop talking to the press,” he concluded.