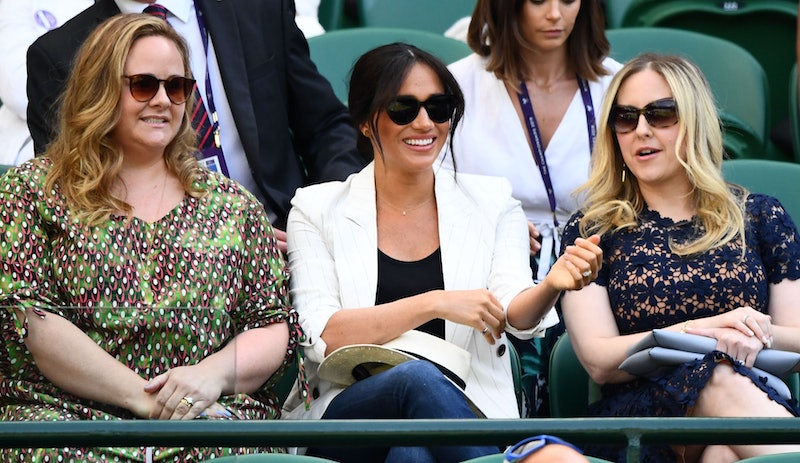 It's been an intense few weeks for Meghan Markle and Prince Harry as they prepare for the release of their controversial new interview with Oprah Winfrey — a decision that has triggered intense scrutiny from the media. Following fresh claims that the Duchess of Sussex was accused of bullying royal aides during her time in Kensington Palace, Meghan Markle's best friends have jumped to her defense.

Actor Janina Gavankar, producer Lindsay Roth, and make-up artist Daniel Martin — all of whom have been friends with the Duchess for more than a decade — each posted passionate testimonies regarding Meghan's character on social media.

Earlier this week, Gavankar tweeted tweeted: "I have known Meghan for 17 years. Here's what she is: kind, strong, open. Here's what she's not: 'a bully.' ANY of us who know her, feel the same thing from her broken silence: Relief. The truth shall set you free."

Roth posted a photo from her wedding, where Meghan was a bridesmaid. The friends had met in college and have been in each other's lives for 22 years.

In the Instagram caption, Roth described Meghan as "laugh out loud" funny and "more than just a cover story."

She continued: "Meg’s M.O. has always been kindness; goodwill runs in her bones. I know this to be true after 22 years of very close friendship. I have seen firsthand how she treats her friends and their families, and her colleagues. ⁣⁣"

The outpouring support continued with Martin, who posted his own image of Meghan along with a quote from the Tao Te Ching, saying that "the world cannot overcome her."

Meghan, who is currently pregnant with her second child, is said to be "incredibly upset " by bullying claims from former royal aides and a spokesperson for the Sussexes has seemed them to be "a calculated smear campaign." The royal household has said it is investigating the accusations.