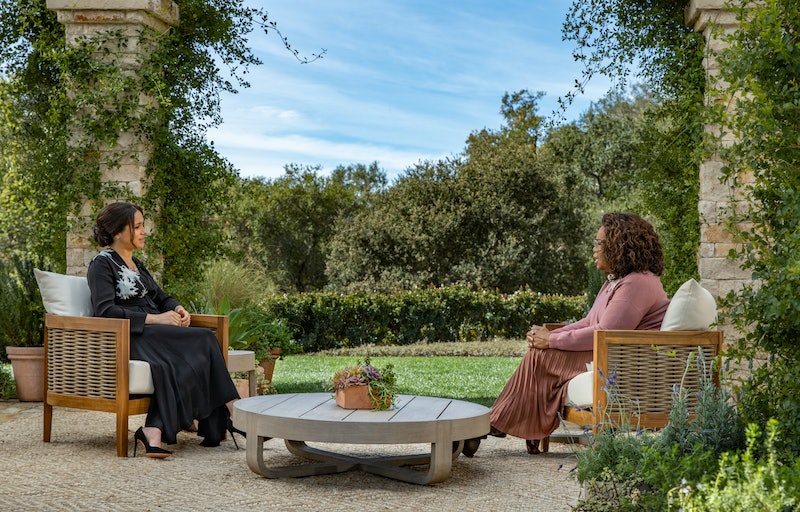 Meghan and Harry aren’t done speaking out quite yet. In an unaired clip from their bombshell interview with Oprah Winfrey, Meghan Markle stressed her desire for a “basic right to privacy,” contradicting a common argument that she should have expected to give up her privacy when she married Prince Harry and entered the Royal Family.

In the clip, shared by OprahMag.com, Meghan argued that even the most prolific people are entitled to some semblance of privacy, even if it’s not as ensured as a normal person’s would be. “I think everyone has a basic right to privacy,” she said, emphasizing the word “basic.” “We're not talking about anything that anybody else wouldn't expect.”

Meghan went on to give a workplace analogy in which a co-worker feels entitled to see every photo of your child on your phone because you have a framed photo at your desk. She compared that hypothetical scenario to her experience as a Royal, making her point clear that no rational person would tolerate this treatment. “If they double down and say, 'No, but you already showed me that one. So you have to show me everything. You know what, I'm just gonna hire someone to sit in front of your house, or hide in the bushes and take pictures into your backyard, because you've lost your right to privacy,’ because you shared one image with me,” she explained.

Even before Meghan and Harry stepped down as senior working members of the Royal Family, they made privacy a priority and even took legal action against British tabloids that threatened it. In February, Meghan won a claim against the Mail on Sunday’s publishers after the newspaper published portions of a letter she had written to her father, Thomas Markle. A British judge ruled that Meghan "had a reasonable expectation that the contents of the letter would remain private” and the articles “interfered with that reasonable expectation."

Meghan and Harry also sued several U.S. paparazzi after images surfaced of their then-14-month-old son, Archie, playing in the backyard of a Los Angeles home, which has now been revealed to be a residence of Tyler Perry, who let the family stay at the home after their royal exit. Harry has spoken out multiple times about the importance of privacy before and after he met his wife, even linking social media to an “invasion of privacy” in 2014.

Ultimately, Meghan told Winfrey that she and Harry were not asking for complete privacy or ignoring the fact that they are public figures, calling that notion a “false narrative.” Instead, the couple expects what any other family would: to simply be able to share what they’re comfortable with. “There's no one who's on Instagram or social media that would say, 'Because I shared this one picture, that entitles you to have my entire camera roll. Go ahead and look through it,’” she said. “No one would want that. So it's about boundaries. And it's about respect.”

More like this
Camilla Paid Tribute To The Queen In A Heartfelt Video Message
By El Hunt and Sam Ramsden
Tyler Perry Makes Rare Comment About Meghan Markle & Prince Harry's Love Life
By Radhika Menon
King Charles Ensured These Subtle Tributes Were Included In Queen Elizabeth’s Funeral Wreath
By Sophie McEvoy
Will Archie & Lilibet Attend The Queen's Funeral?
By Sam Ramsden
Get Even More From Bustle — Sign Up For The Newsletter