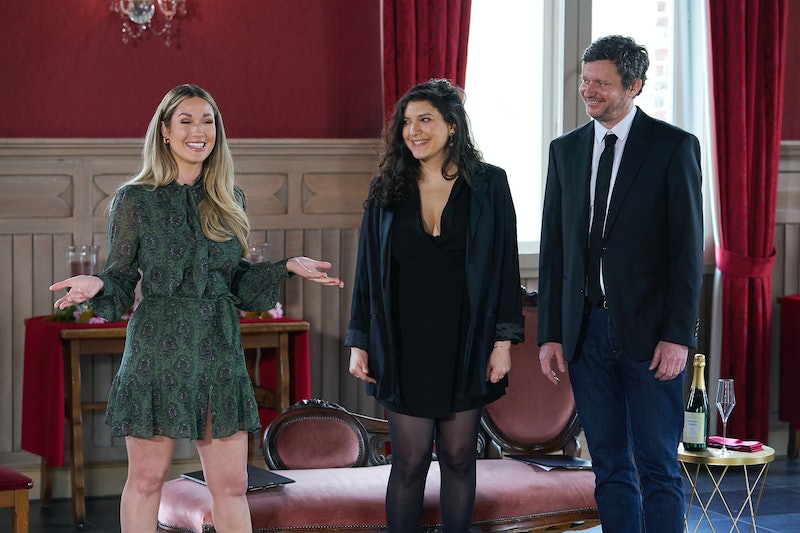 Things got weird on The Bachelorette’s fourth episode. While in Paris, France, Rachel Recchia got upset while watching co-Bachelorette Gabby Windey’s group date — a boxing competition — because the men she gave roses to were too distracted watching the boxing matches to even glance her way. And she let her disappointment be known to the contestants later that night.

So for her group date, Rachel decided to get two experts to teach the men “the art of romance and pursuing your partner ... French-style.” Well, it got cringe real quick. For starters, the experts were heavily engaged in French kissing when the men and Rachel walked in — to set an example of what effective romancing actually looked like.

Then they told the men about their four aspects of romance they were going to learn: to flirt with Rachel non-verbally, prove their French-kissing skills using their hands, have their armpits smelled by the Bachelorette, and write a poem for her and read it aloud. As usual, the winner would get a solo date with Rachel.

While the flirting part was only somewhat confusing (one of them tried to “sexily” crawl to Rachel), grown men fully making out with their hands got uncomfortable for viewers to watch. Things took a turn for the worse when a blindfolded Rachel started smelling her naked dates’ armpits to smell their pheromones and see if she’s attracted to them. And she did not seem to enjoy one man’s natural musk.

Bachelor Nation took to Twitter and collectively cringed. “Bachelor producers: let’s have Rachel smell armpits and tell her that it’s French romance,” one user wrote. It appeared that many viewers at home were confused and grossed out by the events unfolding.

Some Bachelorette fans watching Gabby’s date pointed out that they didn’t really want to watch men box. But after seeing Rachel’s date, they realized they’ll take boxing and professions of love over learning about the four arts of romance any day.

Some users even pointed out the cheeky subtitles Bachelorette producers used for both Meatball, whose odor made Rachel fully stop during the challenge, and Zach, whose go-to flirting move seemed to choke her more than entice her. “The devil works hard, but the Bachelorette producers work harder,” one account noted.

More like this
Bachelorette Gabby Kissed Her New Fiancé On 'Dancing With The Stars'
By Jake Viswanath
Why Did Lace's Fake Her Birthday On 'Bachelor In Paradise'?
By Kadin Burnett
Here's Exactly When Rachel & Tino's Fight Happened After 'The Bachelorette'
By Grace Wehniainen
Here's What Happened After Rachel & Aven Left The 'After The Final Rose' Stage
By Grace Wehniainen
Get Even More From Bustle — Sign Up For The Newsletter