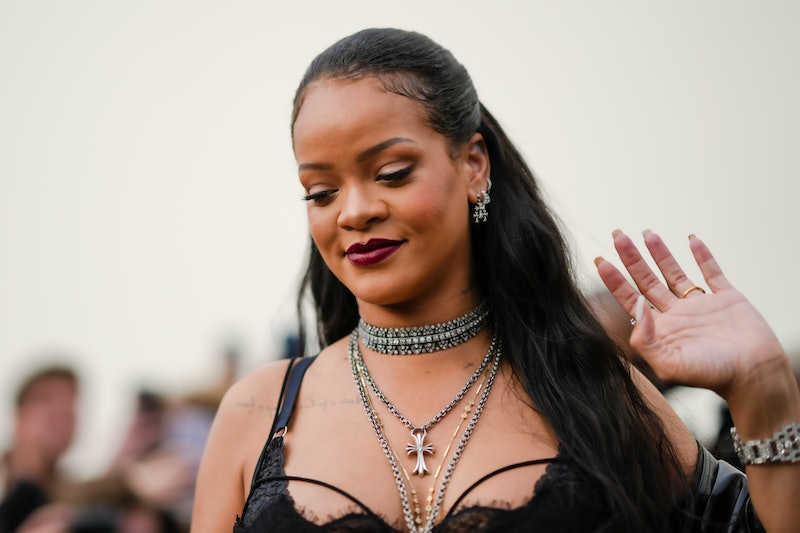 It’s been a long six years since 2016’s Anti for Rihanna fans — years of hope, teases about a new album that still hasn’t come, and disappointment. Now, however, there might be a bright light on the horizon: Rihanna has announced she’ll be performing the 2023 Super Bowl halftime show, and that huge stage often serves as a launchpad to an album announcement. Album or not, though, her big reveal has Twitter reeling with excitement.

The singer posted a photo worth a thousand words on Sept. 25. The image shows her hand holding an NFL football, and that was all it took to start the buzz. Admittedly, there was a little confusion among some fans who seemed afraid to get their hopes up. “This better not be a 14 minute add [sic] of fenty beauty,” one person tweeted in response to her post.

Fans were quick to celebrate. “Yes I will be watching the Super Bowl purely for Rihanna,” one wrote. Another chimed in, “I’m at the Super Bowl if Rihanna there. Like, fr.”

Others started to look forward to the kind of show Rihanna might put on. They had a lot of ideas, including the fans who hope to see Tom Holland join her onstage as a nod to his enthusiastic rendition of “Umbrella” as he competed against Zendaya on Lip Sync Battle in 2017. Meanwhile, at least one person suggested a two-hour show to accommodate all of Rihanna’s hits.

The event’s halftime performances often come with guest performers, like 50 Cent and Anderson .Paak during Super Bowl LVI. With that in mind, fans are also creating a wish list for Rihanna. On it so far are names like Beyoncé, Jay-Z, and A$AP Rocky, but that’s hardly the end of it.

An album — specifically whether or not fans can hope one is on its way — was definitely on people’s minds. Many seemed to think it was a foregone conclusion now that Rihanna’s the Super Bowl halftime show performer. “AND THEN RIHANNA DROPS AN ALBUM AFTER THE SUPERBOWL,” one person tweeted.

Feb. 12 is definitely going to be a big day — it just remains to be seen how big.

More like this
The 'Love, Lizzo' Harry Styles Scene Is Just 1 Moment That Made Fans Feel Seen
By Brad Witter
Mariah Carey Is "So Proud" After Her Kids Joined Her In The Thanksgiving Day Parade
By Stephanie Topacio Long
Kim K Is Putting Kanye’s Memorabilia — Like Grammys & Clothes — In A Vault
By Jake Viswanath
Twitter Is Saying The Same Thing About Jill Scott Winning 'I’m A Celeb'
By Sophie McEvoy
Get Even More From Bustle — Sign Up For The Newsletter