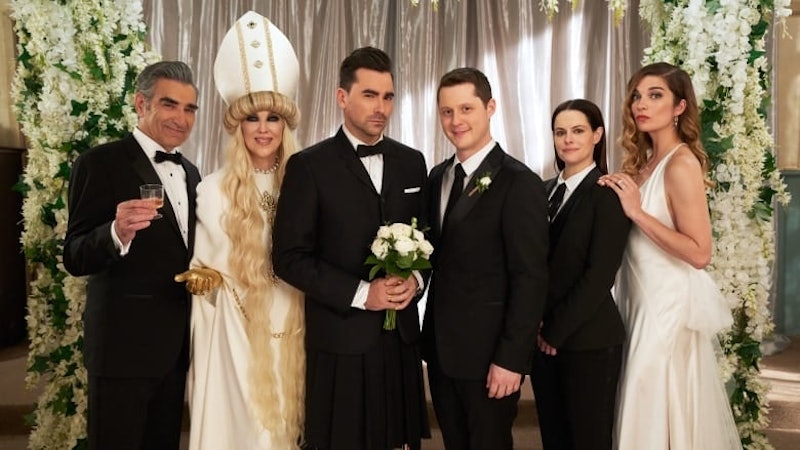 If, like Moira Rose, you find yourself “positively bedeviled with meetings, et cetera,” this weekend, cancel them: Schitt’s Creek is leaving Netflix on Oct. 2, giving viewers mere hours to squeeze in one last marathon. The silver lining? Before you can even say, “Ew, David,” the Rose family will be heading to Hulu, with all six seasons of the Emmy-winning comedy available to stream on the Disney-owned platform for subscribers in the United States, beginning Oct. 3.

Though fans have had about five months to process the development, which Hulu first announced in late April, the streaming service enlisted the help of Alexis Rose (Annie Murphy) and her fictional Alexis Rose Communications PR firm to remind everyone of the impending switch. On Sept. 29, Hulu issued a “special announcement” via a press release in the socialite’s unmistakable vernacular.

“I don’t want to brag, but Hulu is, like, totally obsessed with my family,” she purportedly wrote, referencing father Johnny (Eugene Levy), Moira (Catherine O’Hara), and David (Daniel Levy), and adding her signature “boop,” no less. “After weeks and weeks of, like, heavy business negotiations with Hulu, I could absolutely not say no as a businesswoman. The world deserves the best. And I love that journey for them.”

Though Schitt’s Creek began airing on Pop TV (and CBC in Canada) in 2015, the beloved series gained more widespread popularity when Netflix acquired the streaming rights. Though not a Netflix Original, Schitt’s Creek quickly became one of the streamer’s most-watched shows. After co-creator Dan Levy signed an exclusive deal with Netflix in September 2021, he recognized how the company contributed to his show’s success.

“Netflix offered Schitt’s Creek a second home at just the right time and opened the doors to a whole new audience for us,” the Emmy winner said in a statement at the time. “Watching the show thrive there has only enhanced my excitement about continuing to tell specific, meaningful stories with them in both tv and feature film. A full circle moment.”

Even though the Rose family has already found a new home at Hulu, fans reacted with shock to the change nonetheless, sharing some relatable memes from the show that launched 1,000 GIFs. While some couldn’t help but act like disgruntled pelicans, others took shots at Netflix — with one even accusing the streamer of “trying to ruin October” — while they processed their grief.

Another fan’s tweet attempted to make sense of why Schitt’s Creek is leaving Netflix, while someone else tried to figure out a proper punishment, likening the show’s impending removal to a capital offense.

Since there wasn’t anything they could really do about the loss, many fans made plans to watch as many episodes as possible prior to Oct. 3. “If you’re not binging Schitt’s Creek all weekend, before Netflix removes it, can you even call yourself a fan,” one user tweeted. Added another, “How many times can I watch Schitt’s Creek before it goes away on Sunday…? The limit does not exist.”

Whether they were watching Schitt’s Creek for the first or 10th time, some were just glad they were able to squeeze in all six seasons just under the wire.

Other Twitter users predicted mental health declines when they’re no longer able to stream the LOL-worthy comedy on Netflix.

Though other fans acknowledged that there will still be other ways to watch Schitt’s Creek, some couldn’t help but recognize the end of an era. Either way, some diehards are already planning to subscribe to Hulu.

So, for now, grab your favorite Jazzagals, pop some zhampagne, and enjoy one last Netflix viewing — before you can pick back up again with Hulu, of course.