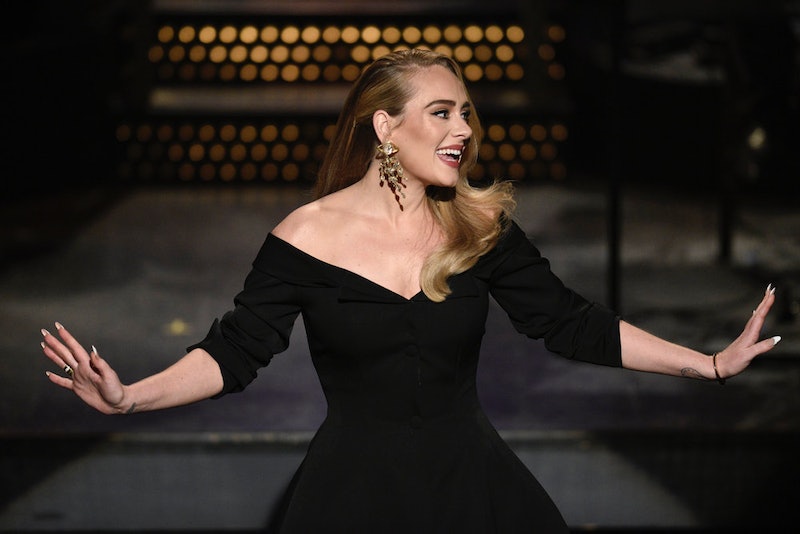 Fans have been on watch for Adele’s next album, and she rewarded them for their diligence during her very first Instagram Live on Saturday, Oct. 9. After taking questions from her followers and battling technical difficulties, the Grammy winner previewed her new song “Easy on Me,” which is due out on Oct. 15. The 45-second snippet unveiled some of her trademark emotional lyrics, so needless to say, many of her fans are now in their feelings and turning to Twitter to express themselves.

The British singer had released a teaser of “Easy on Me” four days prior, but the video didn’t unveil any lyrics. Thanks to her new reveal, though, there are more clues about the song’s meaning. It seems to be about moving on to a new relationship after one that didn’t pan out — much like Adele has. She sings in the clip:

There ain’t no gold in the river / that I’ve been washing my hands in forever / I know there is hope in these waters / But I can’t bring myself to swim when I am drowning / Go easy...

It was enough to have fans crying and predicting a windfall for therapists once the song officially drops. “I can just feel the emotion & pain in Adele’s voice,” one person tweeted. Another fan added, “GOSH THIS IS GONNA WRECK ME.”

The taste wasn’t enough for many people. They want the song’s release date to come now so they can hear it in full. “Can’t wait till Oct 15,” one person lamented with five loudly crying emojis.

Some fans are calling it now: Adele has another hit on her hands. One has already listened to it an “unhealthy amount of times.”

Given that it’s been six years since Adele’s last album, she and her talent were very much missed. No proof was needed, but the reaction to “Easy on Me” still offers it.

“Easy on Me” is just one of the tracks off of Adele’s upcoming album, rumored to be called 30 after she previously released 19, 21, and 25. While she has not confirmed a release date for the record, she has been clear about how personal the work is. Speaking to British Vogue, the singer said that it will give her son some answers to his questions about her divorce from his dad, Simon Konecki.

“I just felt like I wanted to explain to him, through this record, when he’s in his twenties or thirties, who I am and why I voluntarily chose to dismantle his entire life in the pursuit of my own happiness,” she told the magazine. “It made him really unhappy sometimes. And that’s a real wound for me that I don’t know if I’ll ever be able to heal.”

Have the tissues ready on Oct. 15. It’ll be an emotional time for everyone.

More like this
Twitter Is Freaking Out Over Rihanna’s 2023 Super Bowl Halftime Show Announcement
By Stephanie Topacio Long
Everything To Know About Taylor Swift’s 10th Studio Album, 'Midnights'
By Grace Wehniainen and Jake Viswanath
Lizzo Twerks While Playing James Madison's 200-Year-Old Crystal Flute Onstage
By Radhika Menon
What Demi Lovato Really Thinks About Child Stardom, Depression, & Sobriety
By Radhika Menon
Get Even More From Bustle — Sign Up For The Newsletter