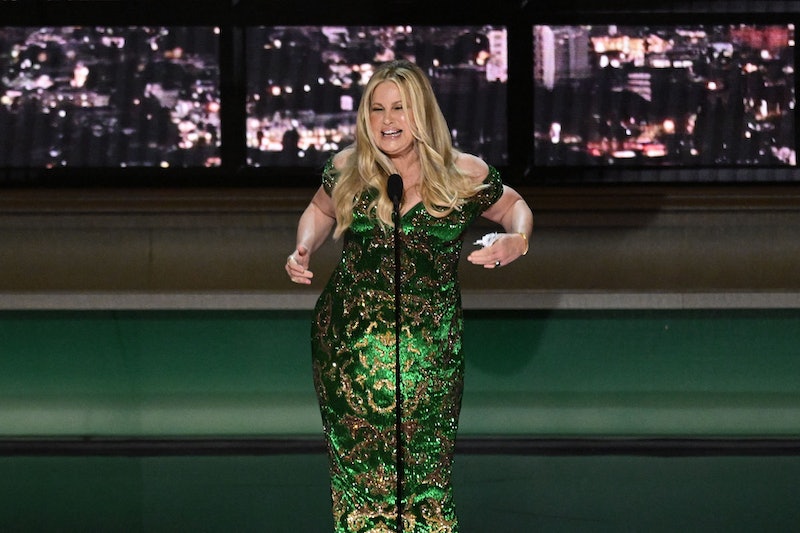 When Jennifer Coolidge speaks, you listen — except the Emmys didn’t. The Legally Blonde star won her first Emmy Award for Outstanding Supporting Actress in a Limited Series as Tanya McQuoid in The White Lotus, and proceeded to give the most hilarious acceptance speech. But before she could wrap up, the orchestra played her off, ignoring her calls of “wait, hold on” and infuriating Twitter in the process. In classic Coolidge fashion, she saved the moment by giving up and dancing to the music, making the audience crack up.

“Hey, hi. Wow, thank you. Gosh. What a night,” Coolidge said onstage. “I just want to say to my fellow nominees, just to be in your company, it’s incredible.” Coolidge prevailed in a category that was primarily filled with her White Lotus co-stars, including Connie Britton, Sydney Sweeney, Natasha Rothwell, and Alexandra Daddario. In fact, the only nominees that weren’t in the HBO series were Dopesick stars Kaitlyn Dever and Mare Winningham.

Coolidge went on to tell a story about a self-care treatment that went awry before the ceremony. “I took a lavender bath tonight right before the show and it made me swell up inside my dress and I’m having a hard time speaking, honestly,” she said. But before she finished thanking her list of people, the play-off music started getting louder. “This is a once-in-a-lifetime thing and I’m full, I’m full” she said. The music, however, didn’t stop playing, which infuriated Twitter and spawned some hilarious memes.

Just like the Emmys audience, Twitter was also enthralled by Coolidge choosing to just dance when she realized the music wouldn’t stop playing. She never got to finish her speech, but she created what Twitter user Jarett Weiselman called “a truly perfect moment.”

Paulette would be proud.

More like this
The 'Love, Lizzo' Harry Styles Scene Is Just 1 Moment That Made Fans Feel Seen
By Brad Witter
The First Trailer For 'That '90s Show' Includes So Many Nods To The Original Series
By Jack Irvin, Alyssa Lapid and Grace Wehniainen
Elizabeth Debicki On Her Approach To The Most Debated Scene From 'The Crown'
By Grace Wehniainen
Matt Smith Proves He's Daddy Daemon In This Viral 'House Of The Dragon' Video
By Marina Watts
Get Even More From Bustle — Sign Up For The Newsletter