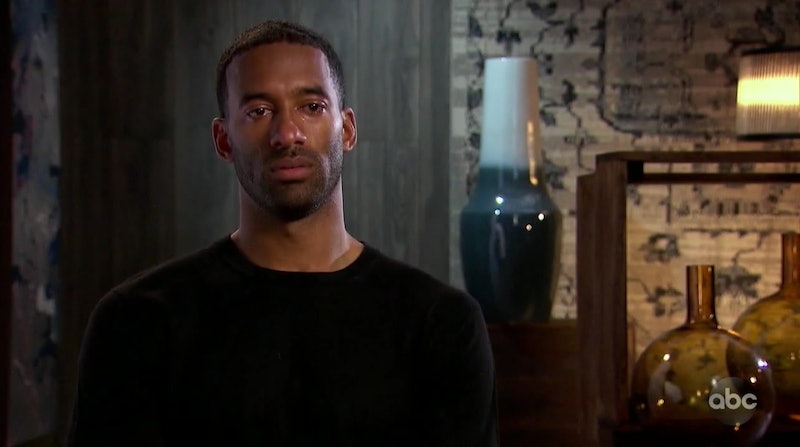 After months of teasing and emotional previews, that Matt James crying scene finally aired on The Bachelor, but learning what left the Bachelor in tears caused many fans to feel another emotion: anger. While Matt has been open with the contestants and production about the impact that his parents’ divorce has had on him, many social media users slammed the franchise for making him confront his father, Manny, about the split on national television.

The conversation, which took place at the start of the episode, was presented as Matt’s idea — he explained that “I still have a lot of fear about what commitment looks like” — and a way for him to make sure he’s ready to propose at the end of the show. “I want to have a family, and I want to be a dad, and I want to be a father. And for me, what that looks like is showing up, having emotional conversations, and being there,” Matt told his father. “I’m thinking about my life and the things I’ve missed out on. I guard my heart, and I guard my emotions because of what I’ve been through with you and with our family.”

Though the situation allowed the pair to have a real and honest conversation about the role Manny played in Matt’s life growing up, many social media users saw the situation as “exploitative” and slammed the franchise for playing into the stereotype of absent Black fathers.

Matt himself acknowledged the optics of the conversation in a series of candid posts on Twitter. “Tonight’s convo with my dad was hard to experience, and it’s just as hard to watch all this time later, especially knowing the world is watching with me,” Matt wrote. “I just wanted to say that too often, we see dangerous stereotypes and negative depictions of Black fathers in media. And they have consequences when presented without context. All I hope is that people watch that conversation with nuance, care, and also an understanding that there are real systemic issues at play. I’m so proud of myself for being vulnerable, and I’m so proud of my mother. I wouldn’t be who I am without my dad. That’s a fact.”

Still, it seems like Matt is glad he had the opportunity to have that difficult conversation with his father, regardless of the circumstances. “I want you to be a part of any relationship I’m in going forward and my kids’ lives going forward because you’re my dad,” he told Manny. “As much as I missed out on our relationship, there’s still a lot of life for both of us to live. I forgive you. I’m not holding grudges against you. I just want us to move forward.”

And while he acknowledged that this was just the first of many difficult talks he and his father will need to have, the whole experience made Matt more confident heading into his fantasy suite dates. “Moving forward, it just confirms for me that I’m not the man my dad is. And just because I’m his son, that doesn’t mean I have to follow in his footsteps,” he said. “I feel like I grew a lot after that conversation with my dad.”

More like this
Why Did Lace's Fake Her Birthday On 'Bachelor In Paradise'?
By Kadin Burnett
Tyra Banks Flubbed The Name Of Charli D’Amelio’s Boyfriend On 'DWTS' Bond Night
By Jake Viswanath
Where Is Former Bachelor Host Chris Harrison Now & What Is His Net Worth?
By Hugh McIntyre
Everything To Remember About Lace Morris Before 'Bachelor In Paradise' Season 8
By Grace Wehniainen
Get Even More From Bustle — Sign Up For The Newsletter