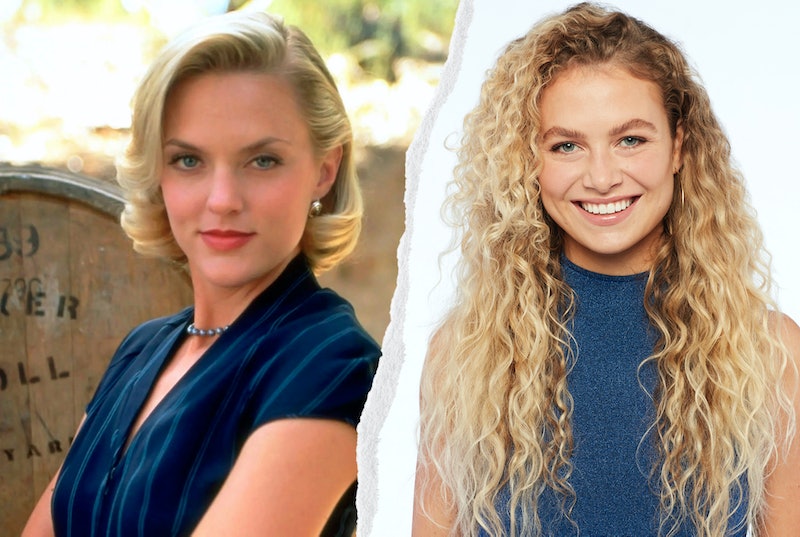 Meredith Blake is a cultural icon, and the woman behind the iconic Parent Trap character will not let her reputation be tarnished — especially by a Bachelor contestant who was accused of bullying. Actor Elaine Hendrix responded to fans comparing Meredith to The Bachelor contestant MJ, whose birth name is actually Meredith, as the show recently revealed. Needless to say, Hendrix is not amused.

On the Feb. 8 episode, Bachelor Matt James sent MJ home after hearing from other contestants that she was causing chaos and division amongst her fellow castmates. Meanwhile, she believed she brought "peace and harmony" to the resort. "The fact that Jessenia said that I was creating this divide in the house when I'm trying to bring everyone together," she told Matt, "I'm mentally and emotionally exhausted." Of course, nobody bought what she was selling, including Matt.

Every Twitter fan celebrated MJ's elimination, including Bachelor superfan Brett S. Vergara, who even compared her to the villainous Parent Trap Meredith. He posted side-by-side photos of the two Merediths and quipped, "In hindsight, we should have KNOWN her name was Meredith." Hendrix did not take kindly to the comparison, who quote-tweeted the post and simply responded, "How dare you."

In recent years, viewers have embraced Meredith Blake, the delightfully wicked, soon-to-be stepmother that you loved to hate for being the one obstacle keeping Annie and Hallie (Lindsay Lohan in her debut film roles) from getting their parents back together in the 1998 film. The character, who was once reviled by all, is now often celebrated for her cunning attitude and determination to go after what she wanted — even if it meant getting rid of recently reunited 12-year-old twins in the process. So it's no surprise to see Hendrix and other Parent Trap fans rightfully and jokingly offended at the comparison to a much less entertaining mean girl.

Of course, Hendrix is not above a good Parent Trap reference. Back in May 2020, the actor commented on Chrissy Teigen's Instagram post that showed a bearded dragon on her daughter Luna's face. "Did @lindsaylohan take you camping?" she wrote, nodding to the infamous scene where Annie and Hallie put a lizard on Meredith's head while hiking to both scare and infuriate her. It just goes to show that nobody can get enough of The Parent Trap.