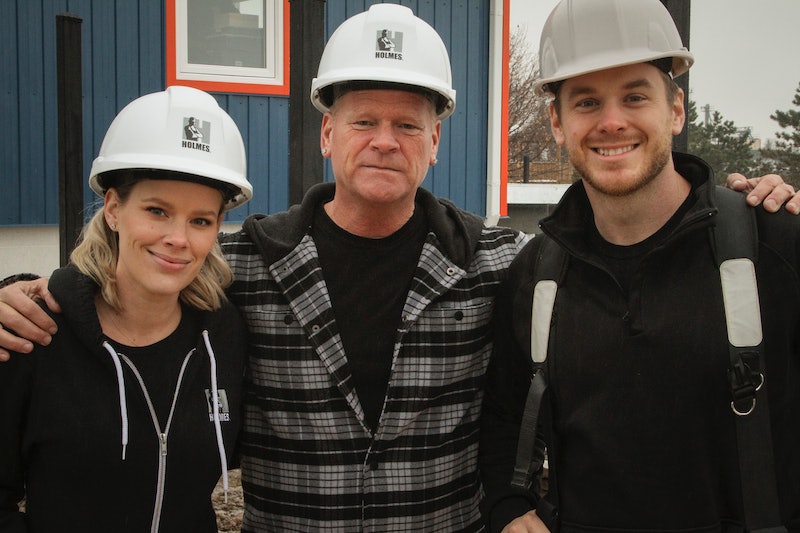 Canadian contractor Mike Holmes has long been a staple on home renovation shows like Holmes on Homes and Holmes Inspection. But now, he’s bringing his kids into the spotlight with him. Holmes’ new show, Holmes Family Effect, features him alongside his daughter Sherry and son Mike Jr. as they help to give deserving people and communities fresh, updated spaces.

The series originally aired on CTV in Canada and is now set to premiere on Fox on March 16. For American viewers who may not be as familiar with Holmes and his family, here’s everything to know.

As Holmes recently wrote on Instagram, “On and off-camera, my goals are simple: Educate homeowners about buying a home, but also how to maintain it. Encourage the industry as a whole to build better. Encourage more people to enter the trades.”

Holmes has worked to achieve those goals on various TV shows. In addition to Holmes Family Effect, he’s hosted several other home renovation and building series, and he’s judged other shows like Canada's Handyman Challenge.

Holmes also runs a YouTube channel and website dedicated to giving people tips for taking care of their houses. And because he knows he can’t build everyone’s house for them, he has an Instagram where he highlights the best builders and renovators other people can hire.

Holmes’ Son Is Also A Contractor

In addition to Holmes Family Effect, Mike Jr. has had an active role on many of his dad’s other shows — including Holmes Makes It Right and Holmes Family Rescue. Like his dad, Mike Jr. is a licensed contractor, and he’s also big into woodworking and carpentry. In 2017, Mike Jr. married Lisa Marie Holmes, who runs a botanical apothecary business.

And So Is Holmes’ Daughter

Like her brother and father, Sherry is a contractor who has appeared in multiple Holmes family TV projects, beginning at age 16. When she’s not helping her dad, she likes to travel and spend time with her family. She’s married to a man named Blake Steed, and they have a young daughter named Cali.

Holmes’ Other Daughter Amanda Doesn’t Work With Him

Mike has another daughter, Amanda Holmes, who hasn’t appeared on his shows and isn’t really active online. As Mike Jr. explained on Instagram, Amanda “doesn’t like social media.” However, she occasionally shows up in pictures on her dad’s page.

Most of the contractor’s social media posts are about work, but he does have a social life outside of that. Though he’s no longer with his children’s mother Amanda Lorex, he’s been spotted on red carpets with his partner Anna Zappia, who he’s been seeing since the early 2000s. Most recently, the two were pictured together in 2017 at the Toronto International Film Festival.