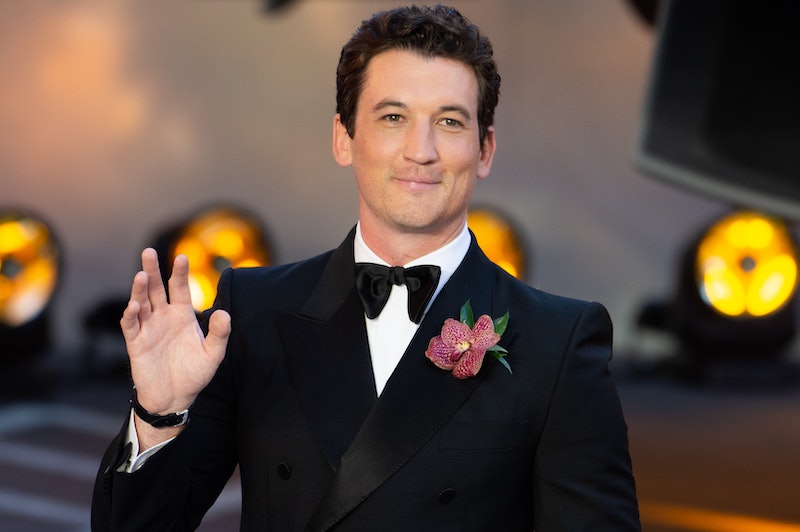 After several years of flying under the radar, Miles Teller seems to be everywhere these days. First, he popped up in Taylor Swift’s music video for “I Bet You Think About Me” in November 2021, and in the summer of 2022, he starred in not one but two major blockbusters: the much-anticipated Top Gun sequel, Top Gun: Maverick and Netflix’s psychological thriller Spiderhead. In fact, Teller’s comeback has even spawned a TikTok phenomenon known as #TellerTok.

After being at the center of an anti-vax scandal, Teller seems to be doing better than ever. In addition to starring roles in some of this year’s biggest films, the actor is also enjoying success in the world of finance thanks to his investment in the buzzy Finnish drink company Long Drink. Teller is also set to be the first host of Saturday Night Live’s 48th season, another accolade to add to his long list of credits. With all of these accomplishments, we couldn’t help but wonder — just how much is this star actually making?

The answer isn’t as simple as it may seem. Despite being a leading man in numerous Hollywood blockbusters, Teller claimed that he hasn’t always been paid fairly for his work. Plus, Teller isn’t without his debts — in 2015, the actor said he was still paying off his student debts from his time at NYU. (Whether or not he paid them as of 2022 remains known.)

To add intrigue to it all is the matter of brand deals — or rather, the lack of brand deals. As it turns out, Teller isn’t willing to become a social media influencer for the sake of some extra cash. “I’ve lost out on a lot of deals, brand deals, endorsement deals, because I don’t have an Instagram,” he told Tampa Bay Times. But, he explained, he doesn’t care. “I love acting, and I’ve been fortunate enough to make a career off it, and make enough money doing that that I haven’t needed to do it.”

So, just how much is “enough”? Here is the surprising net worth of Miles Teller.

Since landing a role in the 2010 film Rabbit Hole alongside the likes of Nicole Kidman, Aaron Eckhart, and Sandra Oh, Teller has been building an impressive CV. Over the past decade, the actor has appeared in a string of hits, including Footloose, The Spectacular Now, 21 & Over, Whiplash, Divergent, and War Dogs. And Teller’s career is only growing — in 2022 alone, he starred in Top Gun: Maverick, The Offer, and Spiderhead.

With over 30 acting credits to his name, it’s safe to say that Teller’s film and TV career is his main source of income.

However, not all of his roles have been all that well-paid — especially the ones in independent films. “When I did Whiplash, after taxes, I made like $8,000,” Teller told The Times. “So for me to be able to make a living, and to pay off my student loans and to do things you want to do, you gotta make studio films.”

While Teller’s independent projects may not have involved huge paychecks, he has appeared in enough big blockbusters to make up for it.

For instance, just this year, he appeared in Netflix’s Spiderhead, which opened at number one on Netflix, and Top Gun: Maverick, which broke box office records, making over $1 billion in its first few weeks.

While Teller’s salary for these projects hasn’t been officially announced, rumor has it, he was paid $700,000 for Spiderhead and $3.5 million for Top Gun: Maverick.

There was one film that might have added to Teller’s net worth — in 2017, it was reported that Teller had originally been in talks to star in La La Land. However, Page Six reported that the actor turned down the role when he asked for $6 million and was offered only $4 million. Teller has since refuted these claims. “The money side of it was fine,” he told Vulture. “I can 1,000 percent assure you that if there was a part I wanted to play, I would not turn down four million dollars to do it.” Instead, Teller claimed in an interview with Esquire, director Damien Chazelle decided to go in a different artistic direction.

In addition to his acting work, Teller has also dipped his toe into the world of producing. So far, he has been an executive producer on the Paramount+ show The Offer (in which he also starred) and is currently producing (and starring in) a new film called Not Without Hope.

While Teller certainly isn’t interested in seeking out brand deals, when a brand comes along that he feels a real connection to, he isn’t afraid to make an investment.

In 2022, he found a brand that he could get behind: The Finnish Long Drink, an alcoholic beverage company.

“I wanted to get involved with The Finnish Long Drink because I personally love the taste and history of the company,” he told Rolling Stone. “I’ve been very choosy to the point of almost nonexistent, in the world celebrity endorsement and ambassadorship. With The Finnish Long Drink it was a seamless transition from fan to co-owner. I would have a hard time trying to sell something just for a paycheck.”

He went on: “I don’t do Instagram, I don’t necessarily look at myself as someone that advertises myself for profit. I see a lot of people doing that and that’s fine; you gotta monetize. But to come in from the ground floor, right when they started taking off, that was perfect for me.”

Teller has got a foot on the property ladder.

His first home is a 5 bedroom “Spanish-style” villa in Studio City, which he reportedly purchased in 2016 for $3,075,000. In 2014, Teller jokingly tweeted, “When I buy my first house my shower head will have multiple settings” — we think it’s safe to say this home had more than a fancy shower head!

As Teller explained to Vanity Fair, he could have bought his first house earlier, but he wanted to help his parents pay off their mortgage first.

What Is Miles Teller’s Net Worth?

According to Celebrity Net Worth, Teller’s net worth is $10 million as of 2022. With more successful acting and producing projects in Teller’s future, it’s clear that this Top Gun: Maverick star is set to take off.

More like this
Mike Tindall’s High Earnings Amount To A Royal Flush
By Darshita Goyal
Chris Moyles Is One Of The Richest 'I'm A Celeb' Campmates
By Sam Ramsden
Matt Hancock’s Net Worth Is A Political Minefield
By Maxine Harrison
The 'Love, Lizzo' Harry Styles Scene Is Just 1 Moment That Made Fans Feel Seen
By Brad Witter
Get Even More From Bustle — Sign Up For The Newsletter

This article was originally published on July 5, 2022