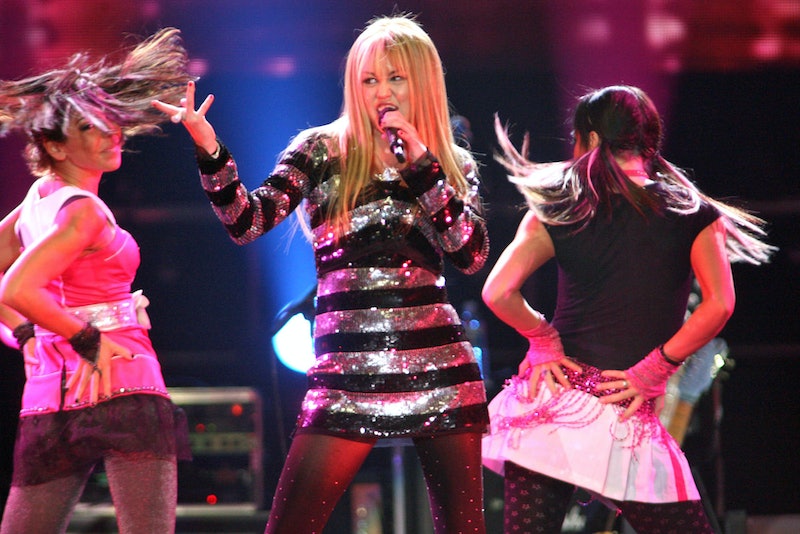 Miley Cyrus may have hung up Hannah Montana's wig for good after the 2011 finale of her breakout Disney Channel show, but the fictional pop star could be poised for a comeback a decade later — even though Cyrus previously declared in 2013 that the popular TV character had been "murdered." Cyrus wants to bring back Hannah Montana for a collaboration with Megan Thee Stallion. Should this come to fruition, it would legitimately be the "best of both worlds."

During a Twitter Q&A on March 1, Hot Girl Meg was asked to reveal her favorite Hannah Montana song. She quickly answered, "If We Were A Movie," a classic from the show's first season that sees Cyrus envisioning the perfect rom-com romance. The song even received a duet version with High School Musical star Corbin Bleu later in the show's run, and if Cyrus has her way, the next step will be a new remix with Meg herself.

Cyrus quote-tweeted Thee Stallion's response and asked the important question: "Can Hannah get a feature?" She also gave the rapper's nicknames and catchphrases her own spin, hashtagging Hannah Snow, Hot Girl Hannah, and of course, Hannah Thee Stallion. Megan has yet to answer Cyrus' inquiry, but given her history of Hannah Montana fandom, and the fact that she'd be the one to thank for this long-awaited comeback, she likely wouldn't say no.

Megan is a long-known stan of Hannah Montana and Cyrus. The rapper even referenced the character's iconic blonde wig in her 2018 song "Tina Montana" (which is actually a nod to the Sopranos character, not a long-lost Hannah relative), singing "snatch off your wig like you Hannah Montana." And the feeling is apparently mutual. Cyrus joined Megan's viral #HotGirlSummer movement in 2109, posting videos of herself on Twitter dancing to the rapper's "Simon Says" hit.

However, the clips received backlash, with some arguing that Cyrus was co-opting a trend popularized by Black women, while others responded by body-shaming the singer and saying she should stop twerking. Megan came to Cyrus' defense in a 2019 interview with PAPER, saying that Cyrus and other stars embracing Hot Girl Summer was "lit" in her eyes. "We want all the Hot Girls we can get," she explained. "For me, watching Hannah Montana ... for Miley Cyrus to be having a Hot Girl Summer, I'm like, 'Damn. That's amazing!'"

In the past week, Cyrus has embraced Hannah throwbacks like never before, posting Instagram "photo dumps" (aka long slideshows) filled with behind-the-scenes snapshots and hilarious scenes from the show. Perhaps most notably, she responded to Lil Nas X's TikTok poking fun at the amount of times Miley Stewart revealed her true identity on the show. Rather than blocked him as he feared, Cyrus joined in and played BFF Lilly Truscott, who just rolls her eyes. "Again? The old Hannah reveal's losing its shock value," she jokes. "You do this every f*cking week, Miley!"

Hannah may have been "murdered," but it seems that Cyrus is getting the itch to bring her back to life. If Cyrus gets the collab she wants (and we deserve), 2021 will be another Hot Girl Summer for the books.

More like this
20 Years Later, Kelly Clarkson & 'American Idol' Judges Reunite For Her Hollywood Walk Of Fame Star
By Radhika Menon
The Trailer For The Whitney Houston Biopic Has Twitter Feeling Heated
By Radhika Menon
Everything To Know About Taylor Swift’s 10th Studio Album, 'Midnights'
By Grace Wehniainen and Jake Viswanath
Twitter Is Freaking Out Over Rihanna’s 2023 Super Bowl Halftime Show Announcement
By Stephanie Topacio Long
Get Even More From Bustle — Sign Up For The Newsletter