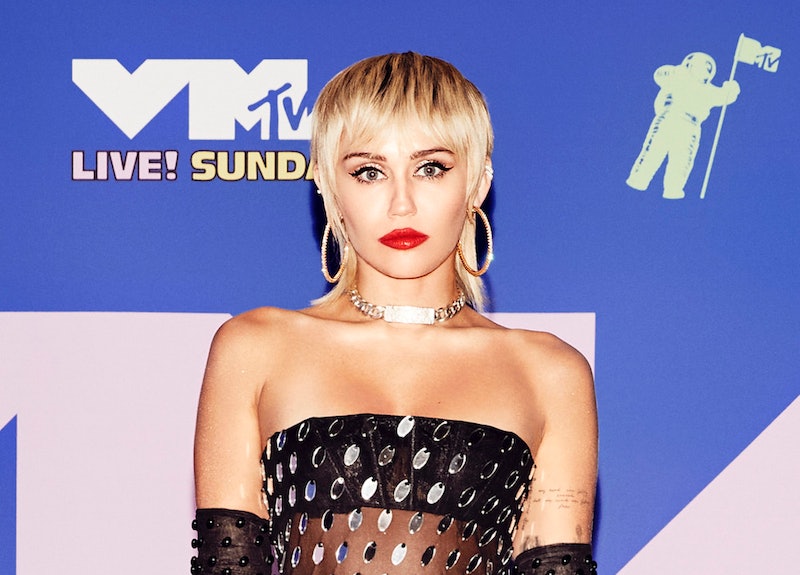 Miley Cyrus fans, rejoice! Plastic Hearts, the singer's seventh studio album, will be out just in time for the holidays. The record is due for release on Nov. 27, which Cyrus revealed in an emotional Instagram post in late October. Reflecting on how the album has been two years in the making, Cyrus explained in the caption that much of the initial body of work was destroyed along with her Malibu home during the 2018 California wildfires. "I lost my house in a fire but found myself in its ashes," she wrote.

Cyrus has already released five tracks from the highly anticipated record, the latest being a collaboration with Dua Lipa called "Prisoner." The edgy new single arrived just a few weeks after Cyrus released "Edge of Midnight" featuring Stevie Nicks, which is a remix of her song "Midnight Sky" that dropped in August. The singer also gave fans two cover songs; a version of Blondie's "Heart of Glass" and a rendition of The Cranberries' "Zombie." If the covers are any indication, Plastic Hearts will diverge from Cyrus' 2017 pop country album, Younger Now, and will offer fans a more disco-inspired, rock-and-roll sound.

If you're curious about what else Cyrus has up her sleeve for Plastic Hearts, you've come to the right place. The album will feature several collaborations with many legendary artists, and the pop star has already revealed the full tracklist. From the song titles to the special guest features, here's everything there is to know about Miley's seventh studio album.

When Will Plastic Hearts Be Released?

Plastic Hearts will debut the day after Thanksgiving on Friday, Nov. 27. The album is available to pre-order now on Cyrus' website and other places where music is sold. The singer announced the official date of release on social media alongside a photo of the pink and black album art — a collaboration with photographer Mick Rock and artist Alana O'Herlihy — that evokes major Joan Jett energy.

A few days after the grand debut of "Edge of Midnight," Cyrus unveiled the album's full track list, which includes a total of 12 songs. The songs are as follows:

Are There Any Notable Collaborations?

Yes, in case you managed to gloss over the major names in the aforementioned section, there are quite a few notable collaborators. A song with Nicks is already one for the ages, but Cyrus took it a step further with songs that feature Dua Lipa ("Prisoner"), Billy Idol ("Night Crawling"), and Joan Jett ("Bad Karma"). Producer Mark Ronson, who worked with Cyrus on the album, also confirmed that singer-songwriter Angel Olsen is featured in "Bad Karma" as a guitarist, tweeting that Olsen's guitar "cuts like razor wire."

On Wednesday, Nov. 18, Cyrus began teasing "Prisoner" on social media by sharing a short clip of the music video. Come Friday, Nov. 20, the song and video were out for all to enjoy. Of course, it wasn't long before fans took to Twitter to share their thoughts about the steamy visual, which featured Miley and Dua closer than they've ever been before.

Have There Been Any Music Videos?

As mentioned above, the music video for "Prisoner" came out on Nov. 20, prompting a big reaction from fans on social media. Not to mention, just a few hours after its release, the video managed to rack up more than 4 million views on YouTube. And while some fans couldn't get over the duo's chemistry, others couldn't stop thinking about the quote that appeared at the end of the video: "In loving memory of all my exes, eat sh*t."

"Prisoner" isn't the only video Cyrus has released from Plastic Hearts, though. In August, Cyrus released the music video for "Midnight Sky" to coincide with the single's release. She self-directed the video, and cited female rock artists such as Nicks, Jett, and Debbie Harry as inspirations for both the song and the disco ball-filled visual. A few months after the release of the "Midnight Sky" video, Miley and Dua teased the music video for "Prisoner" on social media on Nov. 18. "PRISONER IS COMING @MileyCyrus," the "Don't Start Now" singer tweeted alongside the “Prisoner” single art. Cyrus, for her part, shared videos of fans reacting to snippets of the unreleased video on her Instagram.

What Inspired The New Album?

In October, Cyrus revealed in her reflective Instagram post that she began working on the album over two years ago. At that time, the singer thought she had everything figured out — "not just the record with its songs and sounds, but my whole f*cking life," she wrote. With most of the original tracks destroyed, Cyrus said much of the music's relevance disintegrated into ash, too. "Nature did what I now see as a favor and destroyed what I couldn't let go of for myself," she added.

The singer went on to explain that her upcoming album is essentially an extension of all the lessons she's learned over the past several years, with "each record being a continual autobiography." Between the loss of her Malibu home, her divorce from longtime partner Liam Hemsworth, and her split from Cody Simpson, one could presume that Plastic Hearts will be Cyrus' most personal album to date.

More like this
Everything To Know About Taylor Swift’s 10th Studio Album, 'Midnights'
By Grace Wehniainen and Jake Viswanath
Mariah Carey Is Releasing Her “Lost” '90s Grunge Album
By El Hunt
Lizzo Twerks While Playing James Madison's 200-Year-Old Crystal Flute Onstage
By Radhika Menon
Twitter Is Freaking Out Over Rihanna’s 2023 Super Bowl Halftime Show Announcement
By Stephanie Topacio Long
Get Even More From Bustle — Sign Up For The Newsletter

This article was originally published on November 18, 2020