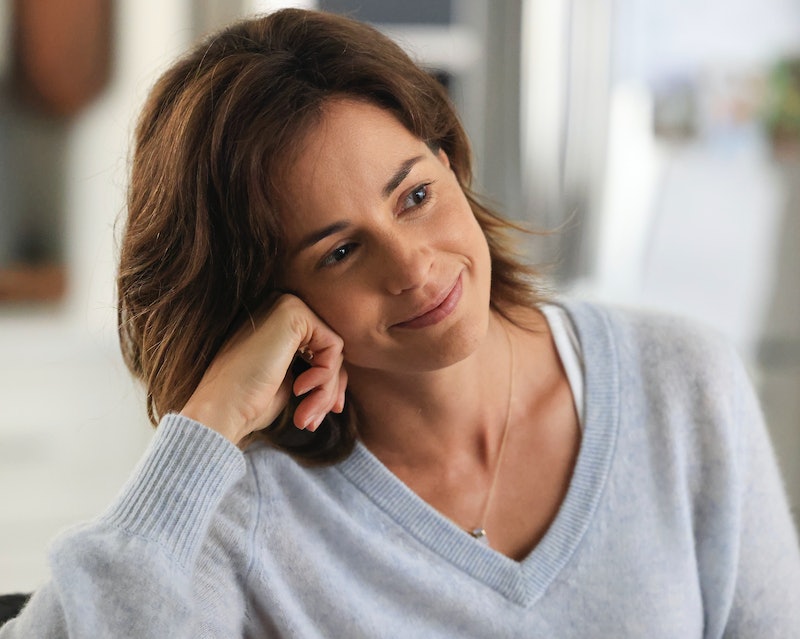 It’s been weeks since anyone saw Delilah on A Million Little Things. She decided to take her dad to France for a month in Season 3, Episode 3 and was just about to come home in Episode 5 when her dad broke his hip on the way to the airport, forcing her to stay abroad for several more weeks while he healed. Then lockdown began and shut down the borders, so it’s now been four episodes that she’s been MIA.

Prior to the Season 4 debut episode, creator DJ Nash kept telling fans to “wait for it” as they continued to ask about Delilah’s disappearance via Twitter. But unfortunately, viewers will have to wait a bit longer for the beloved character to make her way back to the States. The first episode of Season 4 revealed that Delilah decided to stay in Europe “for good” in order to start anew after the death of Jon.

But, have no fear. Nash told TVLine that Stephanie Szostak, who plays Delilah, will be a recurring guest star throughout the current season. “She [Szostak] has, for the first two seasons, lived away from her boys and from her husband,” he explains. “Her ability to work a few days and then fly home for the rest of the week ‘went away with COVID because the second she stepped out of Canada, there was a 14-day reset. So we wrote her out for [Season 3], thinking, ‘Oh, she’ll be back.’ And then she said, ‘I really need to be with my family more, I don’t want to do all the episodes.’”

Nash added that he was “happy” Szostak could remain on the show in some capacity but that it wouldn’t have made “narrative sense” for her character to stay in Boston apart from “the gang’s daily life.” “She’s in a couple [episodes] early on, and then I know where we’re going for the season finale. And then hopefully in the middle, if she’s able to and we have stories for it, we’ll do that as well. I’m hoping we see her more than we saw her last year,” he said.

Prior to the start of Season 4, Nash was transparent about Delilah’s “predicament” as “an active part” of Season 3. “I don’t want to give away her story, but it’s something we’re tracking,” Nash said in an interview with the New York Post in March. “She’s torn between being there for a parent who’s elderly and needy and being there for her children. I loved the idea of putting Delilah in this predicament … where she feels like she’s coming up short on both sides.”

Since the March 25 episode, the kids seemed to be doing fine without Delilah. Darcy and Gary were still staying at the house to take care of Danny and Sophie with Delilah gone. And Sophie seemed less than concerned that her mom was abroad as she joked about Target trips with Gary. The situation worked out well for Maggie, too, as she was staying in Gary’s apartment while he stayed at Delilah’s. That arrangement continued for at least another episode, with Gary and Darcy pictured in Delilah’s bed in one of the press photos for the April 1 episode. Delilah wasn’t slated to appear in that episode or the following one on April 7.

As her storyline continues to pick back up, we’ll likely see how she’s handling caring for her elderly father during a pandemic while separated from her children. And it’s possible one or both of them may come down with the virus. Nash teased to Deadline that Million Little Things’ characters won’t be immune to the effects of coronavirus.

“Our show lives in the authenticity of what really happens in the world. And so, statistically speaking, I would think someone they love gets COVID,” he said, adding that their experience with the virus will reflect the real world around them. “I know how scary it is right now. Our set, we’re doing every single thing we can to make that the safest place it could possibly be, while still at the same time making sure that 250 people, who have rent and mortgages, still continue to be able to keep going. And I think that this friend group is sort in that place too, where they want to be careful, but they also have to keep going.”

The pandemic is in its early stages on the show right now, and we know from real life that things got much worse in Europe before things ramped up in America. So Delilah’s harrowing experience in France is likely coming soon, along with its potential effects on the whole friend group.

More like this
Nicola Coughlan Shared A Lady Whistledown Excerpt From ‘Bridgerton’ Season 3
By Grace Wehniainen, Alyssa Lapid and Sam Ramsden
The New Bachelor Will Be Announced Next Week & Here Are The Top Contenders
By Grace Wehniainen
Alicent's Green Dress In 'House Of The Dragon' May Be An Act Of War
By Kadin Burnett
'The Rings Of Power' Episode 4 May Put A Face To Season 1’s New Villain
By Kadin Burnett
Get Even More From Bustle — Sign Up For The Newsletter