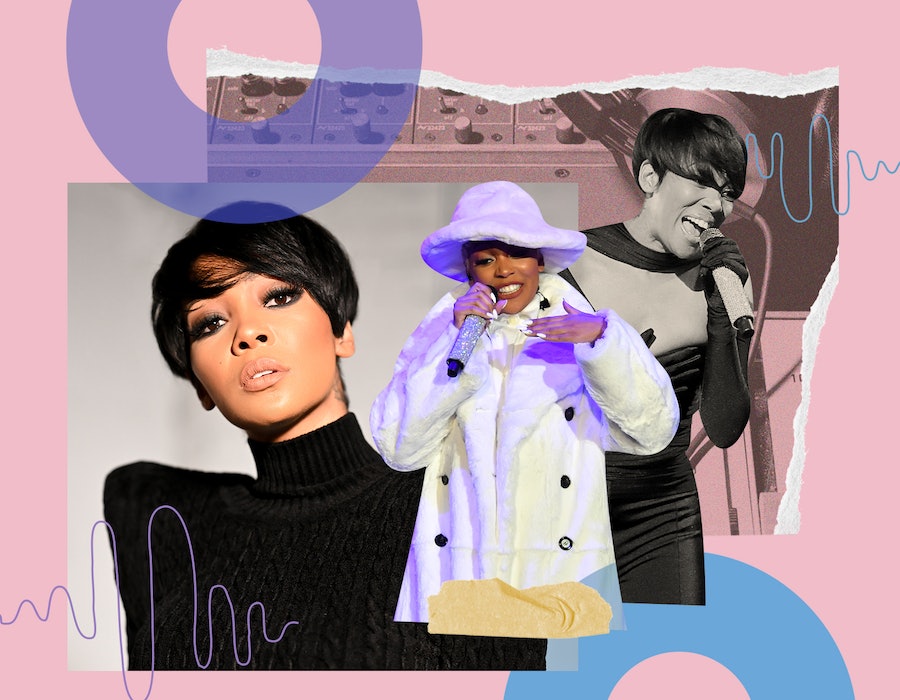 Singer-songwriter Monica’s advice to her younger self will catch you off guard. “Honestly, mine would be reversed, if that makes sense,” she tells Bustle as her smile beams over Zoom. “My younger self was in the right place. Now, because I have so much to think about, you find yourself overthinking it. My younger self, I didn’t think about it — I did it, I said it, I sang it.”

And sing it, she did. The Grammy winner was 14 years old when she released her debut album Miss Thang in 1995, introducing her soulful vocals to the world and becoming the youngest artist to have back-to-back Billboard chart-topping hits with “Don’t Take It Personal (Just One of Dem Days)” and “Before You Walk Out of My Life.” Her sophomore album, The Boy Is Mine, pushed her into the pop space, solidifying her status as an R&B heavy hitter. She’s one of the rare few artists to top the U.S. Billboard Hot R&B/Hip-Hop Songs chart over the span of three consecutive decades.

And yet, during our conversation, it’s abundantly clear that the accolades mean little to Monica in comparison to what she knows others can learn from her journey. “I would hope I could remind people of something I told my 7-year-old the other day,” the mom of three says. “Perfection does not exist.” Eight albums into her career, Monica is still happy to share her life with the public. Now, she’s hosting a true crime series for VH1 called Infamy: When Fame Turns Deadly, launching a video and podcasts partnership with Apple called Mo Talk, and positively impacting communities through her nonprofit organization BeHUMAN — all while also working on her latest studio album, Trenches, which she plans to release later this year.

“Being genuine is important. Being loving to other people is important. Knowing that serving only yourself would be a mistake in this lifetime. You have to serve others.”

Though it’s easy to point to her successes, Monica reveals that her story has been one of triumph over tragedy, one marked by loss and gain, death and birth, and what she describes as “the pursuit of everlasting joy and happiness.” It’s a hard story to tell, but she doesn’t mind telling it.

“As I talk about what has happened in my life and as transparent as I’ve been, I would hope that’s one of the key things [people] could take from it: that being genuine is important,” she says. “Being loving to other people is important. Knowing that serving only yourself would be a mistake in this lifetime. You have to serve others. We’re all here with a purpose and finding your purpose is not always easy, but it exists before we were even born. I hope when people look at my life and look back over my career, they can at least see evidence of that.”

Below, Monica discusses the importance of authenticity when telling stories, finding balance in her career, and the experiences that inspired her upcoming album.

On Sharing Authentic Stories & Finding Balance In Her Career

What drew you to the series Infamy: When Fame Turns Deadly? Why did you want to host a show about true crime?

Infamy was special to me because I’m a fan of that type of show. What I liked most was that VH1 and I had already established a relationship. You start to recognize that in order for people to see your vision, it’s good when they know you. They knew I would be compassionate and I would care when I was speaking of the victims. These tragedies were very big deals where they were from, but not always nationally covered.

To see footage of Shawntray [a victim whose story is featured in Episode 6 of the series], if you heard about him, and then you saw what he was doing in his community, it made you compassionate. You had a level of empathy that couldn’t be ignored. We make sure it’s factual — that’s very important to me. We make sure that it is told with respect, but still with truth. A lot of times, I know my story doesn’t often get told like that and I’m alive.

Speaking of your story, you’ve mentioned difficult things happening that brought you to where you needed to be right now. How did those moments impact your story?

All of my experiences are a part of the woman you see. I was always a very outspoken young girl. I was an outspoken young adult. I was very transparent and I didn’t want to lose that in the process of working to become successful. That was a battle in itself, then real life happens.

You look at an album like After the Storm, [which came] after three deaths, that really took a lot out of me. I witnessed a suicide, then I lost my grandmother and my cousin; she had an aneurysm taking our children to school. That year was my awakening. I started to recognize people for who they were and who they weren’t. I think a lot of times we’re not clear on that. We try to make them be something we want them to be. They can be very close to you. They can be related to you. They can be at a distance. That was my awakening; I released albums throughout it, then I had children. I had relationships, failed ones. I unapologetically said, “Listen, I’m not perfect, but one thing I do is I love and I remain loyal.” Those are all things I’ve been open about. So when I’m creating, I’m creating in a space of truth.

I appreciate what you said about not just seeing people for who they are, but seeing them for who they’re not. That’s great advice.

Yeah, I’m done fixing people at this age. But you know, 20 years ago, I felt differently about the work it takes. I’m not working to be your friend anymore. We’re either on the same page or we simply aren’t, and I’m loving people from a distance. It’s a skillset. A lot of people don’t know how to do it from afar. These are all the things that you learn over time. We talk a lot about our futures, but people don’t recognize what you did has a lot to do with what you’re doing because you’re laying the foundation. My past and my history and who I was and who I used to be, all those things laid the foundation for where I am now.

Some of your experiences include being a Grammy winner, philanthropist, and now the host of a TV series and podcast. How do you find balance in your career?

The reality is family has to come first. I understand there will be some things I sacrifice work-wise because of it, but I can’t get the years back once the kids are grown and gone. That may mean I’m not on every scene, but that’s OK. I’m looking at quality over quantity. A lot of people like to have their hands in a lot of stuff, no judgment there, but for me as a person, it works better when I give a lot of myself to things one at a time. For instance, we filmed Infamy and it had my undivided attention. I was able to do what I needed to do for my kids by day and film Infamy by night. I would alternate between it and working on Trenches, my new album. But now we’re walking into Mo Talk, which is my partnership with Apple Music, and you’ll be able to see six episodes and hear six episodes. As we build that, it has my undivided attention. There’s no in-depth science to it. It’s simply thinking it through and deciding what’s most important.

You recently did a Song Association video with Elle, where you covered songs by everyone from Mary J. Blige to Prince. Who are some of the other artists who inspire you?

Oh, there are a lot. The very first cassette I owned [was from gospel duo] BeBe & CeCe Winans. On any given day, you can hear me blasting “Lost Without You,” one of my favorite songs of all time. Miss CeCe is very inspirational and influential. Now, working in a bit of the country field and having a record out with Jimmie Allen, that influence is really strong. The record I have with Jimmie Allen and Little Big Town is called “Pray,” and it’s not considered a gospel song, but the message is inspirational and is very faith-based, which all of us agreed upon as artists. That’s how we live our lives, but putting a message out there like that is a big deal because that’s not what everyone believes. Not everyone will pat us on the back and say, “Job well done,” but we believe enough to sing it and to sing it in our truth and be serious about it. A lot of people have spoken into my life like Mary J. Blige, Whitney Houston. Those influences were all really strong for me.

You’re releasing Trenches this year. What was the inspiration behind the album?

“Trenches” was the first single I recorded with The Neptunes. It was my first time working with [Pharrell Williams and Chad Hugo] and I was extremely excited, being in Miami and in a space where I could work and create nonstop, not really think about anything else. And one night, Pharrell and I were talking and I was explaining to him the difference in myself and most people. It doesn’t lie in the vocals. Even though you may know my voice when you hear it, it’s the place I sing from and what I’ve experienced [that set me apart]. I told Pharrell, “I really am in the trenches sometimes.” And he said, “Wait, trenches!” and held on to that word. Because the trenches can be a lot of different things. It can be a mental state. You can be in the thick of whatever is happening. When you’re in the thick of it, you feel different. You talk different, you move different.

Growing up, I wasn’t always Monica, the artist, you know? So when [I] speak about the trenches, if you’ve ever been or ever lived there, then you still know what that is. You don’t forget. That’s what keeps you motivated to keep working. Trenches was me saying, “OK, we’ll tap into all of those parts. We’ll tap into every facet of what the trenches are. The trenches of relationships, of being divorced.” It’s been two years now, but it’s still one of those things that makes you say, “I know what it’s like to be hurt and be in a space where I may not be able to explain exactly what I feel, but I can sing it.” So when you go through Trenches, you’ll hear me in the trenches of all of the different emotions, all of the different stages. When I’m singing about being happy and what it feels like to be with a good man, I sing it with my whole heart. It’s no different than when I say, “Kick down your doors and smack your chick” (in the song “So Gone”); you can tell I meant it. I’m singing things from that authentic place. That, to me, is the relatability and the authenticity that I never, ever want to lose.